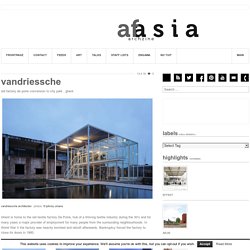 Ghent Vandriessche Architecten . photos: © Johnny Umans Ghent is home to the old textile factory De Porre, hub of a thriving textile industry during the 30’s and for many years a major provider of employment for many people from the surrounding neighbourhoods. Hivernacle Barcelona. A few weeks ago we were lucky enough to escape from the grey winter in Berlin and head towards beautiful Barcelona, to spend a perfect day in the city. 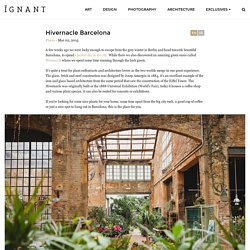 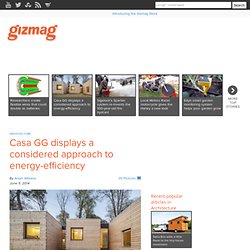 Named Casa GG, the home was built in just four months – however this fact belies the impressive effort that went into studying how best to minimize energy-use before construction even began. View all Measuring 111 sq m (1,200 sq ft) of usable floor space, the single-story Casa GG is a simple rural dwelling that sits nicely amongst the surrounding trees. Structurally, it comprises six box-shaped wooden modules, which are joined together by an interstitial space. Gartnerfuglen . de Delás. Grooming retreat . 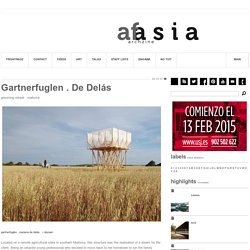 Mallorca Gartnerfuglen . Mariana de Delás . + dezeen Located on a remote agricultural state in southern Mallorca, this structure was the realisation of a dream for the client. Being an urbanite young professional who decided to move back to her hometown to run the family agricultural legacy she asked for a space for grooming, contemplation and delicacy. Raumlabor. FOUNTAIN HOUSE . 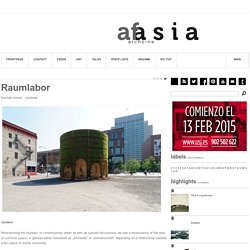 Montreal Raumlabor Reexamining the fountain: In contemporary urban as well as cultural discussions we see a renaissance of the idea of common space, in german either translated as „Allmende“ or „Gemeinschaft“ depending on a relationship towards (city) space or social structures. This is related to the dipole of the private vs. the public as the two dominant categories of the 20th century. John Pawson. Bohemia Industry . 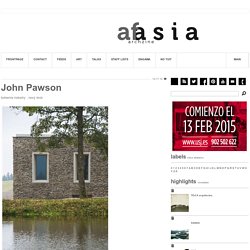 Nový Dvůr John Pawson . photos: © Gilbert McCarragher Alongside the repeating daily cycle of services and private prayer, the monastic day stipulates time dedicated to manual work. At Nový Dvůr, this manual work includes the manufacture of hand cream and the packaging of mustard, the sale of which should generate sufficient income to cover the monastery’s day-to-day running costs. The workshops designed to house these small-scale industrial activities are sited to allow the building to become a natural extension of the existing patterns of circulation. 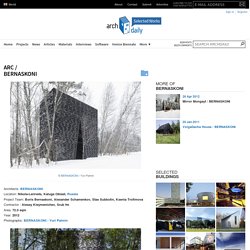 ARC is an architectural and spatial research; it is built on the border between forest and field. It’s a hybrid that performs several functions: a portal, a triumphal arch, an observation deck, a bar, and a well. Portable House ÁPH80 by Ábaton Arquitectura. Spanish architecture studio Ábaton has developed a twenty-seven square metres house that can be easily transported on the back of a lorry and placed almost anywhere. 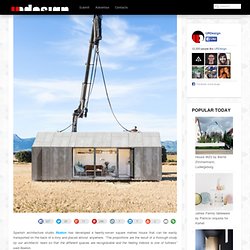 “The proportions are the result of a thorough study by our architects’ team so that the different spaces are recognisable and the feeling indoors is one of fullness” said Ábaton. A combined living room and kitchen is positioned in the centre with a full bathroom and a double bedroom either side. Its gabled roof is 3,5mts high indoors. 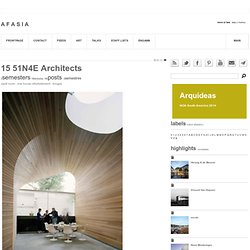 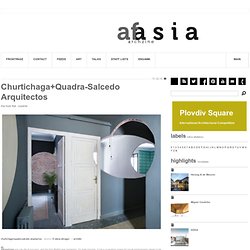 Madrid CHURTICHAGA+QUADRA-SALCEDO arquitectos . photos: © Elena Almagro . + archello Sometimes you can die of success, and the Hub Madrid was happening. Its main function, to be a co-working space for social entrepreneurs began to be seriously compromised by the success of the space for events ... Need so combine both worlds it was becoming more difficult. The Most Amazing (Unknown) Buildings In the World. What makes a building world-famous? The answer is most likely some combination of magnificence, size, and historical importance. But it’s far from an exact science, and many of the world’s most impressive architectural landmarks are therefore not very well known outside of their own locations. Lucid Stead Installation in the California Desert by Phillip K Smith III. “Lucid Stead” is an architectural installation by artist Phillip K. Smith III in Joshua Tree, California.

Koolhaas Houselife / Ila Bêka + Louise Lemoîne. Last night, as Christopher Hawthorne reported for the LA Times, the Hammer Museum played “Koolhaas Houselife”, a comical and witty documentary by Ila Bêka and Louise Lemoîne that follows Guadalupe Acedo, the cleaning woman, as she maintains the 1998 masterpiece. Although architects, designers and engineers may look at the House of Bordeaux and admire its dramatic cantilever, the conceptually thrilling idea of the central lift for the handicapped client, and the circular windows that vary in size and placement according to the heights of the different residents, what is it like to occupy that space on a daily basis? After all, it is a house, and what is it like to do some of the most basic chores in an award winning building? More including a short trailer after the break.

The proposal intends to overcome an existing urban barrier of an expansive railway system to link the university to the city of Mendrisio, utilizing a “skywalk” as well as a large underpass. Because accessibility and movement are at the core of the building’s design, the new addition is a fusion of infrastructure as well as artificial landscape. More on the SUPSI after the break. The essence of Kuma’s SUPSI design is the ramp, sloping in two directions to form a zig-zag shape where the roofs of the inclines become inhabitable public spaces.

These inclined planes were inspired by the layered stone composition of local building roofs, thereby embracing a reinterpretation of scale and building tradition. Sakura / Mount Fuji Architects Studio. Architects: Mount Fuji Architects Studio Location: Meguro, Tokyo, Japan Site area: 131.41 sqm Building area: 75.43 sqm Total floor area: 279.58 sqm Project Year: 2006 Photographs: Ryota Atarashi A home office for a couple planned in a residential neighborhood in Meguro. The site is situated in an area where land costs are among the highest in Tokyo.The area is typically cluttered, like most residential areas in downtown Tokyo.It is hard to say that quality of living environment deserves the price of land. I felt that creating a better living environment was a top priority upon squeezing in yet another house into this neighborhood. What came to my mind were the two classic ‘Glass Houses’※ by Mies and Philip Johnson. Mansilla+Tuñón, Arquitectos: Auditorio Ciudad de Leon at AMNP.