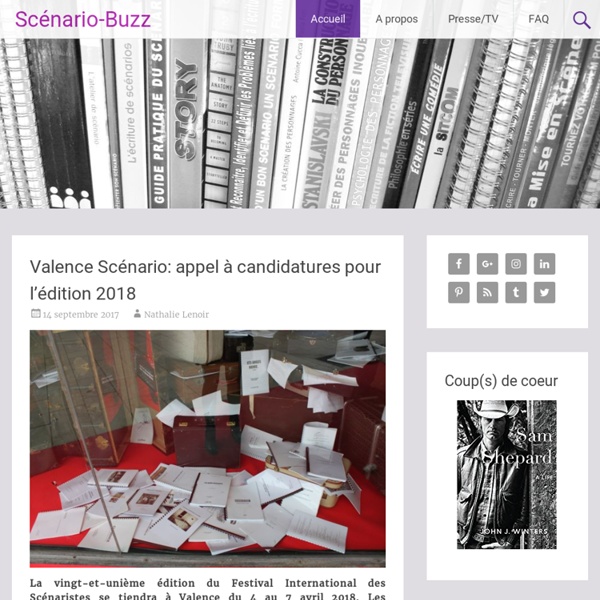 Movie Script Library — Free, Legal! – Go Into The Story Almost 200 movie script PDFs available for download. Each of the scripts listed below has been made available to the public by movie studios and production companies as part of their annual For Your Consideration campaigns. 12 Years a Slave 99 Homes A Monster Calls A Most Violent Year Show, don't tell - Buffy the Vampire Slayer I was thinking yesterday of good examples of "show, don't tell" and one instance that stuck out in my mind comes from the second season of Buffy the Vampire Slayer. There's a particular instance where the writers wanted to make a particular point crystal clear to the audience and it feels like an entire two-parter was built around demonstrating that detail. In the two-parter "Surprise/Innocence," Buffy and her friends are faced with a villain named The Judge, a demon with the power to burn the humanity out of anyone.

Hitchcock’s Storyboards from 13 Classic Films Hitchcock was known for his extensive storyboarding down to the finest detail of production. He was reported to have never even bothered looking through the viewfinder, since he didn’t need to do so. Looking at his storyboards versus the finial film it’s safe to say that is a vast overstatement. How to Guides Welcome to Writer's Resources—your resources! This is the section you come to for how-to and formatting guides, an inspirational kick in the pants, and nifty icons and flyers. You'll find handy links to everything in the section there on the left, and here's a quick overview of each item on the list. How To Guides Monomyth Joseph Campbell's monomyth, or the hero's journey, is a basic pattern that its proponents argue is found in many narratives from around the world. This widely distributed pattern was described by Campbell in The Hero with a Thousand Faces (1949).[1] Campbell, an enthusiast of novelist James Joyce, borrowed the term monomyth from Joyce's Finnegans Wake.[2] Campbell held that numerous myths from disparate times and regions share fundamental structures and stages, which he summarized in The Hero with a Thousand Faces: A hero ventures forth from the world of common day into a region of supernatural wonder: fabulous forces are there encountered and a decisive victory is won: the hero comes back from this mysterious adventure with the power to bestow boons on his fellow man.[3] A chart outlining the Hero's Journey. Summary[edit]

All Movie Scripts at The Screenplay Database Below are all the film scripts currently in the database. 12 and Holding by Anthony S. Cipriano Download | 100 pages | 132 Kb | Digital PDF Format April 6, 2004 Unspecified DraftIMDB How Dan Harmon Drives Himself Crazy Making Community Harmon works long, irregular hours on the set of Community, now in its third season on NBC.Photo: Joe Pugliese The circles are everywhere, if you know to look for them. They’re on the whiteboards around Dan Harmon’s office, on sheets tacked to his walls, on a notepad on the floor of his car.

Wall-E and Toy Story Screenwriter Reveals the Clues to a Great Story Warning: this video contains strong language Last week we posted Pixar’s 22 Rules of Storytelling, a list of 22 golden tips first tweeted by Pixar Story Artist Emma Coats.The article received a tremendous response and since then a number of people have mentioned to us this TED talk by Andrew Stanton. Stanton was the writer for all three Toy Story movies, as well as being the writer/director for Wall-E, Finding Nemo and John Carter. In this captivating lecture Stanton talks about the early days of Pixar, storytelling without dialogue, and capturing a truth from your experiencing it. hero's journey "A Practical Guide to Joseph Cambell’s The Hero with a Thousand Faces" by Christopher Vogler © 1985 “There are only two or three human stories, and they go on repeating themselves as fiercely as if they had never happened before.” In the long run, one of the most influential books of the 20th century may turn out to be Joseph Campbell’s THE HERO WITH A THOUSAND FACES.