Digital To Analog Converter (DAC) & Waveform Generation With MCU. In this tutorial, you’ll learn the basics of digital to analog converters DACs. 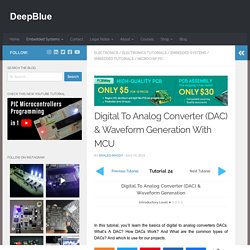 What’s A DAC? How DACs Work? And What are the common types of DACs? And which to use for our projects. This tutorial includes 4 practical LABs/Projects on generating analog voltages using a DAC. It’s going to be an enjoyable tutorial however, combining light-weight theory, many tips, notes, and interesting practice LABs. Components Needed For This Tutorial The Prototyping Board Setup. MIDI3CV - MIDI to CV/Gate Interface. Firmware for PIC16F84A The main piece of code, the brain of the interface. 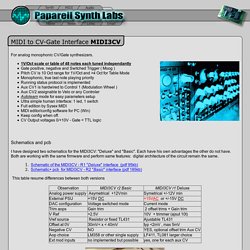 The firmware revision history is here. Files below must be "burned" into the PIC16F84.Very good "diy" PIC programmers and links for ICPROG are at Kudelsko's Web Site. It is a multi purpose led! It blink 3 times at power on, after the complete init of the cpu/software. Autolearn Mode It is the easiest way to set main parameters of the MIDI3CV interface. Www.micro-examples.com. 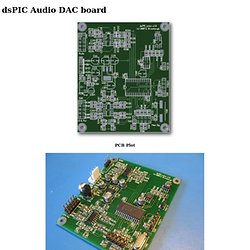 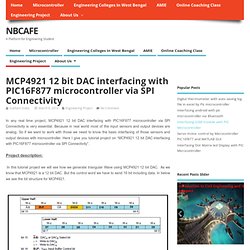 Because in real world most of the input sensors and output devices are analog. So if we want to work with those we need to know the basic interfacing of those sensors and output devices with microcontroller. Here I give you tutorial project on “MCP4921 12 bit DAC interfacing with PIC16F877 microcontroller via SPI Connectivity”. Project description: In this tutorial project we will see how we generate triangular Wave using MCP4921 12 bit DAC. PIC18F4520: Serial Digital-to-Analog Conversion - Northwestern Mechatronics Wiki.

Since PIC microcontrollers do not offer analog outputs, a Digital-to-Analog converter (DAC) must be used to output an analog signal. 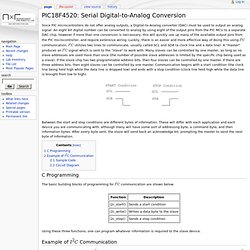 An eight bit digital number can be converted to analog by using eight of the output pins from the PIC MCU to a separate DAC chip, however if more than one conversion is neccessary, this will quickly use up many of the available output pins from the PIC microcontroller, and require extensive wiring. Luckily, there is an easier and more effective way of doing this using I2C communication. I2C utilizes two lines to communicate, usually called SCL and SDA (a clock line and a data line). A "master" produces an I2C signal which is sent to the "slave" to work with. Many slaves can be controlled by one master, as long as no slave addresses are used more than once (the number of possible slave addresses is limited by the specific chip being used as a slave). Between the start and stop conditions are different bytes of information. 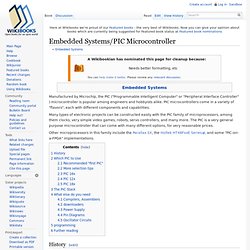 PIC microcontrollers come in a variety of "flavors", each with different components and capabilities. Many types of electronic projects can be constructed easily with the PIC family of microprocessors, among them clocks, very simple video games, robots, servo controllers, and many more. The PIC is a very general purpose microcontroller that can come with many different options, for very reasonable prices.

Other microprocessors in this family include the Parallax SX, the Holtek HT48FxxE Series, and some "PIC-on-a-FPGA" implementations. History[edit] General Instruments produced a chip called the PIC1650, described as a Programmable Intelligent Computer. MCUs. Microchip provides solutions for the entire performance range of 8-bit, 16-bit, and 32-bit microcontrollers, with a powerful architecture, flexible memory technologies, comprehensive easy-to-use development tools, complete technical documentation and post design in-support through a global sales and distribution network. 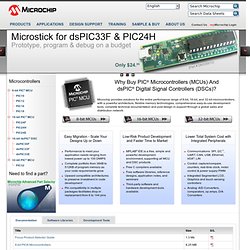 Easy Migration - Scale Your Designs Up or Down Performance to meet your application needs ranging from lowest power up to 100 DMIPS Complete portfolio from 384B to 512KB of program memory as your code requirements grow Upward compatible architectures to preserve investment in code development Pin compatibility in multiple packages facilitates drop-in replacement from 6 to 144 pins Low-Risk Product Development and Faster Time to Market Lower Total System Cost with Integrated Peripherals.