Hack Your Brain to Use Cravings To Your Advantage 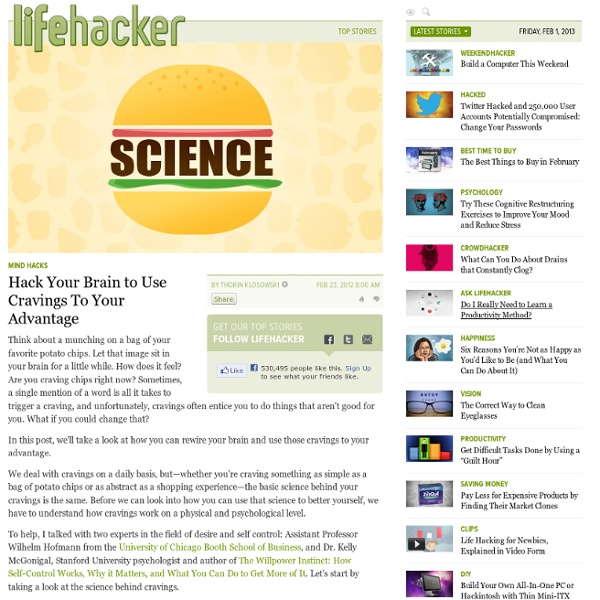 Interesting article, though it probably could be summed up by saying, "Remind yourself of better things to crave, and you might end up craving them instead." What I've found for food-related cravings is that if I deprive myself (intentionally or not) of food and become really really hungry..... then find something to eat, it doesn't matter if I normally dislike the food, I'm so grateful to alleviate my hunger that it tastes awesome. So I guess for bad food cravings try keeping some healthier foods nearby, and resist eating *anything* until you're so hungry you decide to eat the healthy snack..... usually for me, it suddenly tastes WAY better than how I imagined it would. Then you feel better in two ways: your hunger goes away, and you feel the pride/satisfaction of eating something healthy. Also, I know myself well enough that I know usually my cravings are just for something new or variety, often more than the food itself.

Death by Caffeine - StumbleUpon We’ve used the very latest research to determine what’s appropriate for your body weight. See more about your daily caffeine limits. Recommendations for caffeine levels are different for aged 18 and under. The calculator is intended for use only by adults over 18. Endocrine system In addition to the specialised endocrine organs mentioned above, many other organs that are part of other body systems, such as bone, kidney, liver, heart and gonads, have secondary endocrine functions. For example the kidney secretes endocrine hormones such as erythropoietin and renin. A number of glands that signal each other in sequence are usually referred to as an axis, for example, the hypothalamic-pituitary-adrenal axis. As opposed to endocrine factors that travel considerably longer distances via the circulatory system, other signaling molecules, such as paracrine factors involved in paracrine signalling diffuse over a relatively short distance. The word endocrine derives from the Greek words ἐνδο- endo- "inside, within," and κρίνειν krinein "to separate, distinguish".

Depression Is Linked to Hyperconnectivity of Brain Regions, a New Study Shows Paralympian Oscar Pistorius broke down in court once again during his turn on the witness stand, as he remembered the night that he shot his model girlfriend, Reeva Steenkamp. The public has waited for over five weeks for a glimpse into the mind of South African Paralympian Oscar Pistorius, who is currently in the witness box in Pretoria’s North Gauteng High Court to provide evidence and defend himself in the murder trial of his girlfriend Reeva Steenkamp, whom he shot and killed on Valentine’s Day last year. The six-time gold medalist was scheduled to be sworn in at the beginning of March, but the trial was postponed due to the illness of one of the judge’s assessors. The moment everything changed Sobbing uncontrollably after hours of exhaustive testimony on Tuesday, Pistorius detailed the events proceeding the moment that he put four bullets through his bathroom door, killing his 29-year-old girlfriend.

120 Ways to Boost Your Brain Power Here are 120 things you can do starting today to help you think faster, improve memory, comprehend information better and unleash your brain’s full potential. Solve puzzles and brainteasers.Cultivate ambidexterity. Use your non-dominant hand to brush your teeth, comb your hair or use the mouse. Brain Research Bulletin - Effects of mindfulness meditation training on anticipatory alpha modulation in primary somatosensory cortex Abstract During selective attention, ∼7–14 Hz alpha rhythms are modulated in early sensory cortices, suggesting a mechanistic role for these dynamics in perception. Here, we investigated whether alpha modulation can be enhanced by “mindfulness” meditation (MM), a program training practitioners in sustained attention to body and breath-related sensations.

The best detox foods to look great - StumbleUpon Having a diet rich in detox foods will naturally help your health. But some of those foods are especially good to make you look great. Eating more of the detos foods below will not only improve your look but also support your body to detox naturally and flush out environmental toxins as well as metabolic waste. Losing weight Artichoke: One of the best detox foods for your liver, artichokes are also low in calories and contains compounds that can help lower your cholesterol levels. Lemon: Adding some lemon juice and zest to your drinking water will supply your body with over 30 detox compounds.

The Mammalian Pineal Gland May Be The Third Eye Author: Prof. Lili Feng and et al I Am Not My Brain - Jerry DeNuccio My patience, always a dwindling and, I’ve come to think, nonrenewable resource, has, at long last, been thoroughly tried—tried and convicted of aggravated aggravation with skepticism aforethought. What was it that shanghaied my forbearance and drove me to this illicit state? A book. Yes, a book, the very thing that typically flash freezes my patience, preserves it, makes it a cryonic fugitive unpinned from tick-tock sweep-handedness of time. And what was this offending book? None other than David J.

Category:Creativity Techniques This A to Z of Creativity and Innovation Techniques, provides an introduction to a range of tools and techniques for both idea generation (Creativity) and converting those ideas into reality (Innovation). Like most tools these techniques all have their good and bad points. I like to think of these creativity and innovation techniques as tools in a toolbox in much the same way as my toolbox at home for DIY. It has a saw, spanner, hammer, knife and all sorts of other things in it, they are all very useful, but you have to pick the right tool (creativity / Innovation technique) for each job.

Modern parenting may hinder brain development, research suggests Social practices and cultural beliefs of modern life are preventing healthy brain and emotional development in children, according to an interdisciplinary body of research presented recently at a symposium at the University of Notre Dame. "Life outcomes for American youth are worsening, especially in comparison to 50 years ago," says Darcia Narvaez, Notre Dame professor of psychology who specializes in moral development in children and how early life experiences can influence brain development. "Ill-advised practices and beliefs have become commonplace in our culture, such as the use of infant formula, the isolation of infants in their own rooms or the belief that responding too quickly to a fussing baby will 'spoil' it," Narvaez says. The United States has been on a downward trajectory on all of these care characteristics, according to Narvaez. Instead of being held, infants spend much more time in carriers, car seats and strollers than they did in the past.

Wild Mood Swings - Surf the web on a whim. (C) Sean McManus - StumbleUpon <p style="font-size:x-large;">Oh no! You don't have Javascript enabled. Please <a href=" Javascript now</a> or the only moods you'll experience will be boredom and frustration.</p><hr noshade> Pick your mood, click the button and Wild Mood Swings will open an appropriate website in a new window. 10 Surprising Things That Benefit Our Brains That You Can Do Every Day One of the things that surprises me time and time again is how we think our brains work and how they actually work. On many occasions I find myself convinced that there is a certain way to do things, only to find out that actually that's the complete wrong way to think about it. For example, I always found it fairly understandable that we can multitask. Well, according to the latest research studies, it's literally impossible for our brains to handle two tasks at the same time.

Michael Taft: Hardwired for the Mystical? The gap between atheists and the religious seems at times to be an impossible divide, almost as if believers and non-believers come from different species. What separates the secular from the sacred? An "Ask the Brains" question on the Scientific American site recently inquired as to any differences between the brain of an atheist and the brain of a religious person. Andrew Newberg, the director of research at the Myrna Brind Center of Integrative Medicine at Thomas Jefferson University and Hospital in Philadelphia, responded that, yes, in fact, there are some small but perceptible differences between the brains of believers and non-believers. Newberg is a pioneer in the field of "neurotheology," the study of how the brain approaches faith. For example, the frontal lobe of the brain governs reward, attention and motivation.

Related:  gucciroc
Related:  MBTI 16 Types   -  9 Tactics for Rapid Learning (That Most People Have Never Heard Of) « Scott H Young   -  Simple Bites | Whole food for the family table.   -  Backmasking & Reverse Speech - Talk Backwards   -  Home   -  TheSite.org | Your guide to the real world   -  Données publiques et journalisme:|| une mine de richesses! » OWNI, News, Augmented   -  Welcome to Queendom! Would you like to learn more about yourself? You've come to the right place!   -  How to win Rock-paper-scissors every time   -  Neuroscience for Kids - Animal Sleep   -  Weight Watchers Recipes With Points Plus - Low Calorie Recipes Online   -  Science & Nature - Human Body and Mind - Mind   -  100 Websites You Should Know and Use (updated!)   -  Untrusted Connection   -  One Cool Thing a Day - Today   -  100 Ways to Kickstart Your Brain On a Lazy Day | MatchACollege.com   -  String theory - Wikipedia, the free encyclopedia   -  World Heritage List   -  Hark: Sound Clips, Movie Quotes and Ringtones   -  carlogiovani   -  Top Hairstyles for December 2016   -  Standing wave - Wikipedia, the free encyclopedia   -  THE MERCK MANUAL: The Merck Manual of Diagnosis and Therapy   -  Ten Common Fallacies Everyone Should Know   -  Harvard Referencing Generator | We love referencing!   -  Don’t Fear the Internet   -  The Single Best Ab Exercise You Can Do -- And It's Not A Crunch | ThePostGame   -  The best detox foods to look great   -  99 Interview Tips That Will Actually Help You Get a Job | Passive Panda   -  printer   -  EFSA - Scientific Report of EFSA: The Community Summary Report on trends and sources of zoonoses, zoonotic agents and food-borne outbreaks in the European Union in 2008   -  Matthew Reinhart | Pop-ups, paper art and beyond   -  Ministry for Primary Industries - FoodSafety   -  Emerging Infectious Diseases journal - CDC   -  Cambridge Journals Online - Epidemiology & Infection Vol. 139 Iss. 01   -  Made in Pretoria | i do it myself   -  Homepage | ESCCAP   -  7 Billion World - 7 billion people on 1 page