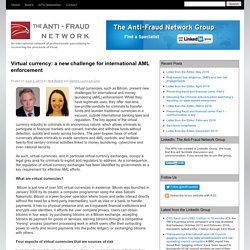 Whilst they have legitimate uses, they offer real-time, low-profile conduits for criminals to transfer funds and launder traditional currencies in a vacuum, outside international banking laws and regulation. The key appeal of the virtual currency industry to criminals is its anonymous nature, which allows criminals to participate in financial markets and convert, transfer and withdraw funds without detection, quickly and easily across borders. An introduction to cyber crime, security and digital intelligence. There are several factors determining the future shape of the cyber security landscape: The rise of the machine readable Web, also known as Web 3.0Increasingly vast data storageComputer processing at light speedIncreasingly advanced and persistent threatsSlow human decision-making speeds and a general lack of awarenessA growing chasm between cyber security decision needs and cyber security decision capabilities. 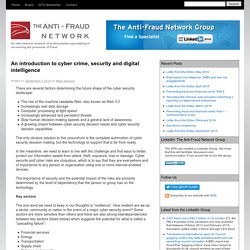 The only obvious solution to this conundrum is the complete automation of cyber security decision making, but the technology to support that is far from ready. In the meantime, we need to learn to live with the challenge and find ways to better protect our information assets from attack, theft, exposure, loss or damage. The top 3 cyber security threats for NZ small businesses: #ConnectSmart. Three days after I stepped off a plane in January 2009 I bought my first car to explore New Zealand – a sporty, silver Subaru Legacy. 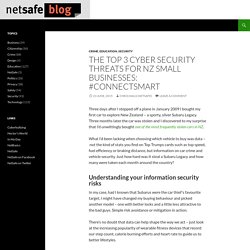 Three months later the car was stolen and I discovered to my surprise that I’d unwittingly bought one of the most frequently stolen cars in NZ. What I’d been lacking when choosing which vehicle to buy was data – not the kind of stats you find on Top Trumps cards such as top speed, fuel efficiency or braking distance, but information on car crime and vehicle security. How to combat online scam artists. Last updated 05:00, April 4 2015 123rf Early April typically sees a rash of emails claiming to be from the Inland Revenue Department, offering tax refunds. 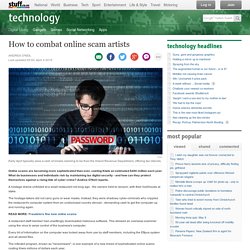 Online scams are becoming more sophisticated than ever, costing Kiwis an estimated $400 million each year. What do businesses and individuals risk by maintaining lax digital security - and how can they protect themselves against a rising tide of cyber crime? Andrea O'Neil reports. A hostage drama unfolded at a small restaurant not long ago - the owners held to ransom, with their livelihoods at stake. The hostage-takers did not carry guns or wear masks.

READ MORE: Fraudsters fine tune online scams A restaurant staff member had unwittingly downloaded malicious software. Every bit of information on the computer was locked away from use by staff members, including the Eftpos system and all stored files. The restaurant had no backup data so, after hours of panic, the owners were forced to pay $750 to unlock their files and continue trading. Kiwis suffer $4.4m internet fraud losses. Last updated 13:00 12/08/2013 A handful of New Zealanders have been blackmailed over the past few months after taking part in "naked video chat sessions" with overseas fraudsters, says cyber-safety organisation Netsafe. 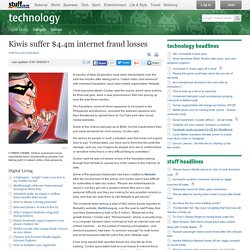 Chief executive Martin Cocker said the scams, which were entirely for financial gain, were a new phenomenon that had sprung up over the past three months. Commerce Commission. The Commission is increasingly being contacted about potential 'scams'. 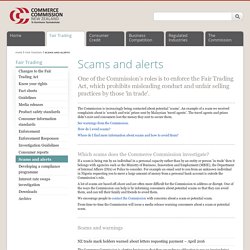 An example of a scam we received complaints about is 'scratch and win' prizes sent by Malaysian 'travel agents'. The travel agents and prizes didn’t exist and consumers lost the money they sent to secure them. See warnings from the Commission. How do I avoid scams? Where do I find more information about scams and how to avoid them? Which scams does the Commerce Commission investigate? If a scam is being run by an individual in a personal capacity rather than by an entity or person 'in trade' then it belongs with agencies such as the Ministry of Business, Innovation and Employment (MBIE), the Department of Internal Affairs (DIA) or Police to consider. Cybercrime / Cybercrime / Crime areas. Cybercrime is a fast-growing area of crime. 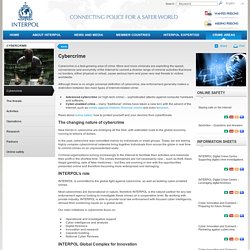 More and more criminals are exploiting the speed, convenience and anonymity of the Internet to commit a diverse range of criminal activities that know no borders, either physical or virtual, cause serious harm and pose very real threats to victims worldwide. Although there is no single universal definition of cybercrime, law enforcement generally makes a distinction between two main types of Internet-related crime: Cyber Crime. Electronic crime – what it is and how to report it. Electronic crime, also known as e-crime or cybercrime, refers to criminal activity that involves the Internet, a computer or other electronic devices. 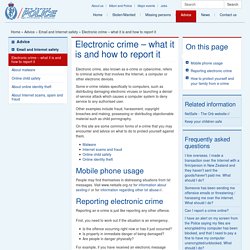 Some e-crime relates specifically to computers, such as distributing damaging electronic viruses or launching a denial-of-service attack which causes a computer system to deny service to any authorised user. Other examples include fraud, harassment, copyright breaches and making, possessing or distributing objectionable material such as child pornography. On this site are some common forms of e-crime that you may encounter and advice on what to do to protect yourself against them. Mobile phone usage. Cybercrime. A safe and secure online environment enhances trust and confidence and contributes to a stable and productive community. 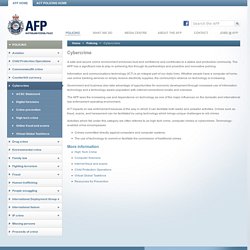 The AFP has a significant role to play in achieving this through its partnerships and proactive and innovative policing. Information and communications technology (ICT) is an integral part of our daily lives. Whether people have a computer at home, use online banking services or simply receive electricity supplies, the community's reliance on technology is increasing.