Nobelprize.org. Yuri Milner. How Russian Tycoon Yuri Milner Bought His Way Into Silicon Valley. In less than two years, Yuri Milner's fund has gone from zero equity to more than $12 billion in assets.Photo: Greg Girard This is my first trip to Moscow, and Yuri Milner, the world’s most successful investor in social media, is taking me to his parents’ apartment, which he bills as a typical middle-class Moscow dwelling.

It’s drab Soviet brick outside. The none-too-reliable-looking elevator is encircled by a crumbling staircase. But inside, the apartment is genteel and highly recognizable to me. It’s like many you would find on the Upper West Side of Manhattan, a cramped and comfortable set of rooms without a recent paint job, filled with too many tchotchkes and way too many books. The message seems clear: Milner may have invested in virtually every social media powerhouse, from Facebook to Twitter to Spotify. Brunswick Group - communications consultancy. Google / Facebook / Apple Breakthrough Prize in Life Sciences. Mashable: Mark Zuckerberg, Sergey Brin Launch $33 Million Science Prize. Some of the biggest names in Silicon Valley just launched their own equivalent of the Nobel Prize. 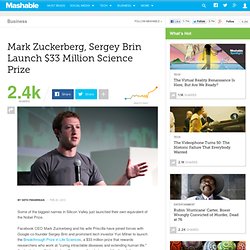 Facebook CEO Mark Zuckerberg and his wife Priscilla have joined forces with Google co-founder Sergey Brin and prominent tech investor Yuri Milner to launch the Breakthrough Prize in Life Sciences, a $33 million prize that rewards researchers who work at "curing intractable diseases and extending human life. " Apple chairman Art Levisohn will serve as the chairman of the foundation. “Priscilla and I are honored to be part of this,” Zuckerberg said in a statement Wednesday announcing the new foundation. 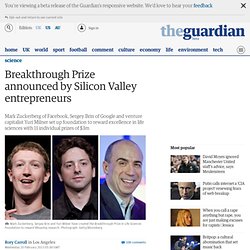 The newly created Breakthrough Prize in Life Sciences Foundation on Wednesday announces the first 11 winners of an award intended to inject excitement into the sometimes lonely, underfunded quests to understand and combat cancer, diabetes, Parkinson's disease and other maladies. Zuckerberg, who founded Facebook; Brin, who co-founded Google; and Milner, a venture capitalist, have dipped into their fortunes to sponsor awards worth $3m each, compared with a Nobel prize's monetary value of $1.1m. Laureates = ? = committee. FreezePage laureates = ? = committee. Nobel keeps its kudos but award from Yuri Milner and friends is fairer.

Yuri Milner's latest prize is a collaboration with Mark Zuckerberg and Sergey Brin. 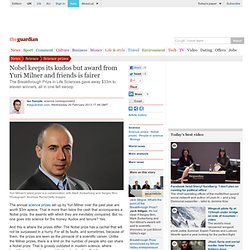 Photograph: Andreas Rentz/Getty Images The annual science prizes set up by Yuri Milner over the past year are worth $3m apiece. That is more than twice the cash that accompanies a Nobel prize, the awards with which they are inevitably compared. But no one goes into science for the money. Mark Zuckerberg And Sergey Brin Discuss Collaboration On Life Sciences Award. Anne Wojcicki. Anne E. 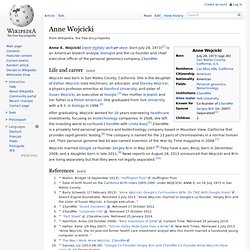 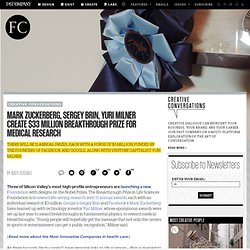 The Breakthrough Prize in Life Sciences Foundation is to reward life-saving research with 11 annual awards, each with an individual reward of $3 million. Google's Sergey Brin and Facebook's Mark Zuckerberg have teamed up with technology investor Yuri Milner, whose eponymous awards were set up last year to award breakthroughs in fundamental physics, to reward medical breakthroughs. "Young people will hopefully get the message that not only the careers in sports or entertainment can get a public recognition," Milner said. [Read more about the Most Innovative Companies in health care.] 23andMe (23andMe) sur Twitter. Kennis-Oscar voor twee Nederlanders. Grote prijs voor hoogleraar Clevers. Grote prijs voor hoogleraar Clevers. 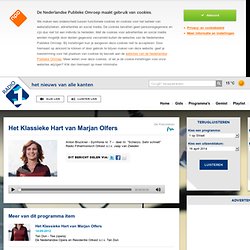 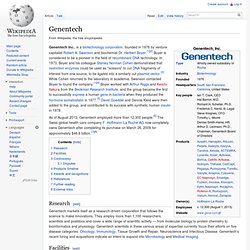 Hoffmann-La Roche AG now completely owns Genentech after completing its purchase on March 26, 2009 for approximately $46.8 billion.[7][8] Research[edit] Genentech markets itself as a research-driven corporation that follows the science to make innovations. They employ more than 1,100 researchers, scientists and postdocs and cover a wide range of scientific activity — from molecular biology to protein chemistry to bioinformatics and physiology. Genentech scientists in these various areas of expertise currently focus their efforts on five disease categories: Oncology, Immunology, Tissue Growth and Repair, Neuroscience and Infectious Disease.

Facilities[edit] Building 32, one of the Genentech headquarters' newer buildings Controversy[edit] Disputes[edit] In 1999, Genentech agreed to pay the University of California, San Francisco $200 million to settle a nine-year-old patent dispute. Arthur D. Levinson. Education[edit] He received his bachelor's degree from the University of Washington in Seattle in 1972 and his PhD in biochemistry from Princeton University in 1977. 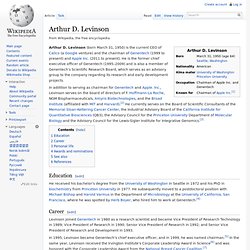 He subsequently moved to a postdoctoral position with Michael Bishop and Harold Varmus in the Department of Microbiology at the University of California, San Francisco, where he was spotted by Herb Boyer, who hired him to work at Genentech.[4] Career[edit] Hans Clevers wint onderzoeksprijs internetmagnaten. A Cancer Drug Shows Promise, at a Price That Many Can't Pay. Meet Art Levinson, Apple's New Chairman. Apple has appointed Arthur Levinson, one of Silicon Valley's most respected leaders, as the company's new Chairman of the Board. Who exactly is Levinson, and why has Apple chosen him to lead the board? Levinson has served on Apple's board of directors for more than a decade. 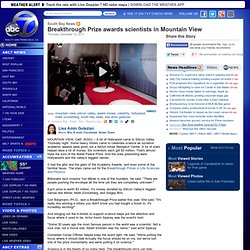 (KGO) -- A bit of Hollywood came to Silicon Valley Thursday night. Some heavy hitters came to celebrate science as lucrative academic awards were given out a NASA Ames Research Center. A lot of stars helped raise a lot of money. Six scientists each got $3 million. Zuckerberg, Brin Award $33 Million To Scientists. New Breakthrough Prize in Life Sciences is misguided. Like a lot of people, I awoke this morning to the news of the new Breakthrough Prize in Life Sciences. Initiated by multibillionaires Art Levinson, Sergey Brin, Anne Wojcicki, Mark Zuckerberg, Priscilla Chan and Yuri Milner, the Breakthrough Prize is intended to recognise "excellence in research aimed at curing intractable diseases and extending human life.

" Winners are awarded $3 million each and since this is a prize, they can spend this money in any way they wish. According to the website, this prize is "dedicated to advancing breakthrough research, celebrating scientists and generating excitement about the pursuit of science as a career. " Wonderful -- anything to give science a positive and prominent public profile. But unfortunately, this prize is flawed and seriously misguided and thus, I don't think it will accomplish its stated goals. First and foremost, the Breakthrough Prize draws attention to the fundamental misunderstanding of how scientific research is actually done. The Breakthrough Prize Awards 2014. The Breakthrough Prize. 8 Scientists Share $21-Million in Prizes for Physics and Life Sciences – The Ticker - Blogs. Eight scientists have been awarded a total of $21-million in prizes that honor achievements in physics and life sciences, according to The New York Times and a news release from the foundations that sponsor the awards.

Yuri Milner, a Russian entrepreneur, led the establishment of the two awards, which are known as the Breakthrough Prize in Fundamental Physics and the Breakthrough Prize in Life Sciences. Mr. Milner’s foundation created the physics prize last year, and he later led a group of Internet luminaries in setting up the life-sciences prize. The six winners of the life-sciences prize, who won $3-million each, are James P.

It rests firmly upon a reinforced pad anchored to concrete pilings. The floor covers 8 acres and can accommodate six (6) (360 feet x 160 feet) American football fields. The airship hangar measures 1,133 feet (345 m) long and 308 feet (94 m) wide. The building has an aerodynamic architecture. Google founders offer '100 percent' funding to save Hangar One, NASA considering offer. Hangar One, once home to the Navy's giant airships at Moffett Field, finally has a few willing benefactors: Google's top three executives have offered to salvage the historic landmark. NASA's response -- we're thinking about it. Larry Page, Sergey Brin and Eric Schmidt -- the CEO, co-founder and executive chairman of the Web search giant, respectively -- have, through a company they control, proposed paying the full $33 million cost of revamping the iconic hangar.

But there's a catch: They want to use up to two-thirds of the floor space of the hangar to house their fleet of eight private jets. The three made the proposal in September, and it was received positively by NASA Ames, which owns Hangar One and Moffett Field, on which it sits, said Ken Ambrose, director of operations for H211. Hangar One's fate: NASA Inspector General won't back down. Following the backlash over a June 2011 report pushing for the disposal of historic Hangar One and Moffett Federal Airfield, the NASA Inspector General has issued another report igniting opposition from Hangar One preservationists. Singularity university.

Google plex, 1600 Amphitheatre Pkwy, Mountain View, Santa Clara, California 94043, Verenigde Staten. Photos: 2014 Breakthrough Prizes awarded for scientific research. Posted Dec 12, 2013. Fundamental Physics Prize. Landon T. Clay. Landon T. Clay (Landon Thomas Clay) is an American businessman and founder of the Clay Mathematics Institute. Clay graduated from Harvard in 1950 with a B.A. in English. Clay was the chairman of Eaton Vance Corporation from 1971 to 1997 and has been a director of ADE Corporation since 1970[1][2]--a mutual fund management and distribution company.