AT&T engineer: NSA built secret rooms in our facilities. The EFF's case against AT&T has barely begun, yet it has already brought to light some fascinating details about the methods behind the NSA's alleged wiretapping abilities. 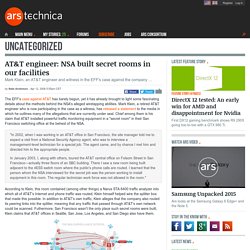 Mark Klein, a retired AT&T engineer who is now participating in the case as a witness, has released a statement to the media in which he outlines many of the allegations that are currently under seal. Chief among them is his claim that AT&T installed powerful traffic monitoring equipment in a "secret room" in their San Francisco switching office at the behest of the NSA. "In 2002, when I was working in an AT&T office in San Francisco, the site manager told me to expect a visit from a National Security Agency agent, who was to interview a management-level technician for a special job.

Google Maps Has Been Tracking Your Every Move, And There’s A Website To Prove It. How to Turn Off GPS on a Cell Phone. When you are traveling, having a phone that is GPS-capable can be useful. 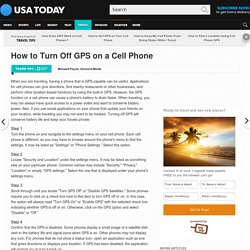 Applications for cell phones can give directions, find nearby restaurants or other businesses, and perform other location-based functions by using the built-in GPS. However, the GPS function on a cell phone can cause a phone's battery to drain faster. New Algorithm Predicts Your Future Movements Within 65-Foot Accuracy. How the Government Is Tracking Your Movements. Law enforcement is taking advantage of outdated privacy laws to track Americans like never before. 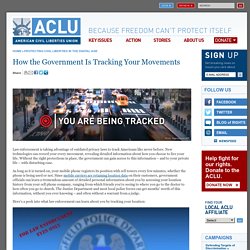 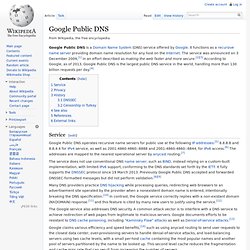 It functions as a recursive name server providing domain name resolution for any host on the Internet. The service was announced on 3 December 2009,[1] in an effort described as making the web faster and more secure.[2][3] According to Google, as of 2013[update], Google Public DNS is the largest public DNS service in the world, handling more than 130 billion requests per day.[4] Service[edit] Another privacy threat: DNS logging and how to avoid it. Alternative DNS - WikiLeaks. From WikiLeaks This site provides guidelines for using alternative DNS servers in countries implementing domain name based censoring systems. 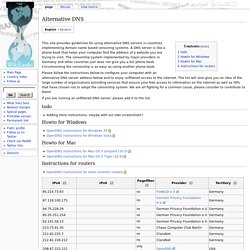 A DNS server is like a phone book that helps your computer find the address of a website you are trying to visit. The censorship system implemented by major providers in Germany and other countries just does not give you a full phone book. - OpenNIC Project. Replicant developers find and close Samsung Galaxy backdoor. This is a guest post by Replicant developer Paul Kocialkowski. 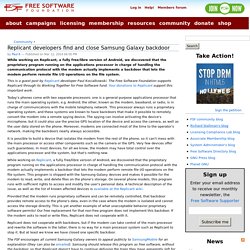 The Free Software Foundation supports Replicant through its Working Together for Free Software fund. Your donations to Replicant support this important work. Today's phones come with two separate processors: one is a general-purpose applications processor that runs the main operating system, e.g. Android; the other, known as the modem, baseband, or radio, is in charge of communications with the mobile telephony network.

This processor always runs a proprietary operating system, and these systems are known to have backdoors that make it possible to remotely convert the modem into a remote spying device. Replicant (operating system) An example of phone information in Replicant, including a brief hardware description The software that was in charge of handling the communication with the modem (which is called Radio Interface Layer – RIL) was then replaced by free code, thus making the telephony part usable. 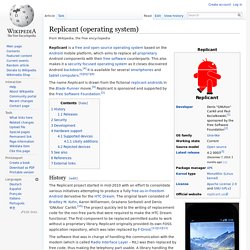 A library handling the GPS was then adapted from free code that was originally written for another phone and permitted the HTC Dream to have GPS working with Replicant.[13] Early versions of Replicant were based on the Android Open Source Project code, while versions 2.2 (April 2011) and later use CyanogenMod as their base, in order to make supporting more devices easier.[14][15] NSA Has Full "Back Door" Access To iPhone, BlackBerry And Android Smartphones, Documents Reveal. Two months ago, when we reported that the NSA has successfully inserted illegal access protocols into the Android OS, thus granting it back door access into nearly three quarters of all cell phones, the news was met with skepticism and resistance: how could an open-sourced architecture be so frail and open to penetration was the most common complaint. 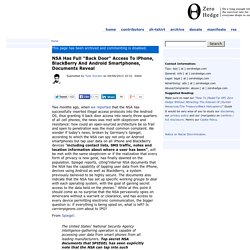 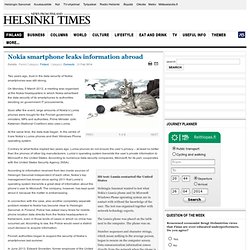 On Monday, 5 March 2012, a meeting was organised at the Nokia headquarters in which Nokia advertised the data security of its smartphones to authorities deciding on government IT procurements. Soon after the event, large amounts of Nokia’s Lumia phones were bought for the Finnish government: ministers, MPs and authorities. Lenovo slapped with lawsuit over dangerous Superfish adware. Installing and reinstalling Windows - Windows Help. Some notes on SuperFish. What's the big deal? 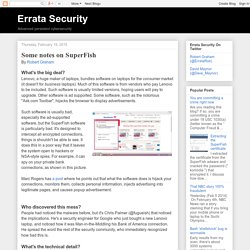 Lenovo, a huge maker of laptops, bundles software on laptops for the consumer market (it doesn't for business laptops). Much of this software is from vendors who pay Lenovo to be included. Such software is usually limited versions, hoping users will pay to upgrade. Other software is ad supported. Some software, such as the notorious "Ask.com Toolbar", hijacks the browser to display advertisements. Such software is usually bad, especially the ad-supported software, but the SuperFish software is particularly bad. Retail version windows 7. Cisco's Backdoor For Hackers. Snowden: The NSA planted backdoors in Cisco products.

If you worked in IT sales, can you image how difficult your life would be if your foreign customers assumed that the hardware you sold them had backdoors to let the U.S. government spy on them at will? That's not a hypothetical question. [ Learn how to protect your systems with Roger Grimes' Security Adviser blog and Security Central newsletter, both from InfoWorld. ] Incredible as it seems, routers built for export by Cisco (and probably other companies) are routinely intercepted without Cisco's knowledge by the National Security Agency and equipped with hidden surveillance tools. Sony BMG copy protection rootkit scandal. Sony BMG XCP audio CD player The Sony BMG CD copy protection rootkit scandal of 2005–2007 concerns deceptive, illegal, and potentially harmful copy protection measures implemented by Sony BMG on about 22 million CDs. When inserted into a computer, the CDs installed one of two pieces of software which provided a form of digital rights management (DRM) by modifying the operating system to interfere with CD copying.

How to disable the Autorun functionality in Windows. The updates that this article describes fix a problem with the disable Autorun feature. Without these updates, Autorun for a network drive cannot be disabled. Expert Says NSA Have Backdoors Built Into Intel And AMD Processors. 510 Flares Twitter 135 Facebook 351 Google+ 18 LinkedIn 3 inShare3 StumbleUpon 0 Pin It Share 2 2 Reddit 1 Email -- Email to a friend Filament.io 510 Flares × In an interesting story covered by the Australian Financial Review it is revealed that experts think the NSA has hardware level backdoors built into Intel and AMD processors. Its smart TV is indeed spying on you and it is doing nothing to stop that. Xbox, Kinect NSA Spying Was Done Without Consent, Claims Microsoft.

Microsoft has quickly responded to new information brought to the public about the NSA, the National Security Agency, infiltrating and using popular web and online gaming services to monitor, collect data and spy on various individuals. OkCupid unapologetic about mismatching users in dating experiment. OkCupid Lied To Users About Their Compatibility As An Experiment. Everything We Know About Facebook's Secret Mood Manipulation Experiment.