Inside the SC Johnson vs. David Cay Johnston dispute on corporate taxes. By Dave Umhoefer Published on Sunday, September 11th, 2011 at 10:00 p.m. 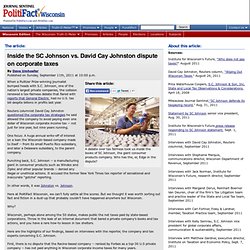 An Investment Manager's View on the Top 1% This article was written by an investment manager who works with very wealthy clients. him from decades ago, but in 2011 he e-mailed me with some concerns he had about what was happening with the economy. 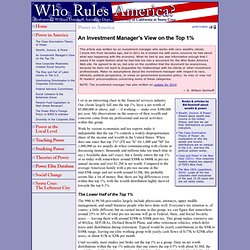 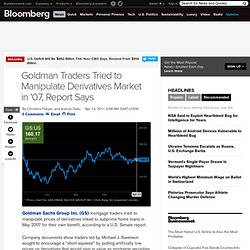 (GS) mortgage traders tried to manipulate prices of derivatives linked to subprime home loans in May 2007 for their own benefit, according to a U.S. Senate report. Company documents show traders led by Michael J. Swenson sought to encourage a “short squeeze” by putting artificially low prices on derivatives that would gain in value as mortgage securities fell, according to the report yesterday by the Permanent Subcommittee on Investigations. The idea, abandoned after market conditions worsened, was to drive holders of such credit-default swaps to sell and help Goldman Sachs traders buy at reduced prices, according to the report. Top 10 US Corporate Tax Avoiders Named on Senate Floor. Despite complaints about the U.S.’s burdensome 35% corporate tax rate, two-thirds of American corporations pay no taxes in a given year. 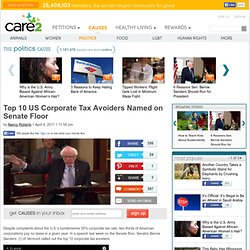 In a speech last week on the Senate floor, Senator Bernie Sanders (I) of Vermont called out the top 10 corporate tax avoiders: Among those actually getting money back from the Feds: ExxonMobil made $19 billion in profits in 2009, paid no federal income taxes, received a $156 million rebateBank of America received a $1.9 billion IRS refund despite $4.4 billion of profitsGeneral Electric had $26 billion in profits, and $4.1 billion refund (GE made it onto another top 10 list of top corporate lobbyists in 2010, spending $39 million)Chevron nabbed a $19 million refund after making $10 billion in profits.

The Double Irish - How Companies Bypass the US High Income-Tax Rate. Tim DeChristopher: A Monkey Wrencher comes to Trial. From Rising Tide: A little over two years ago, .. 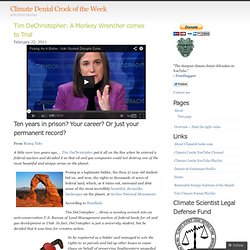 Tim DeChristopher put it all on the line when he entered a federal auction and derailed it so that oil and gas companies could not destroy one of the most beautiful and unique areas on the planet. Posing as a legitimate bidder, the then 27 year old student bid on, and won, the rights to thousands of acres of federal land, which, as it turns out, surround and abut some of the most incredibly beautiful, dreamlike landscapes on the planet, at Arches National Monument. According to Buzzflash: Bank of America to pay $137M in state fraud cases. Bank of America will pay $137.3 million to settle allegations that it defrauded schools, hospitals and dozens of other state and local government organizations, federal officials said Tuesday. 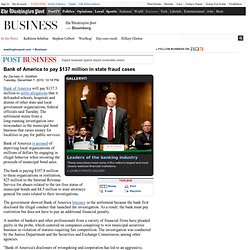 The settlement stems from a long-running investigation into misconduct in the municipal bond business that raises money for localities to pay for public services. Bank of America is accused of depriving local organizations of millions of dollars by engaging in illegal behavior when investing the proceeds of municipal bond sales. The bank is paying $107.8 million to these organizations in restitution, $25 million to the Internal Revenue Service for abuses related to the tax-free status of municipal bonds and $4.5 million to state attorneys general for costs related to their investigations. The government showed Bank of America leniency in the settlement because the bank first disclosed the illegal conduct that launched the investigation. Goldfarbz@washpost.com. Subscribers Have Been Ripped off for $5 a Month Since 2000. 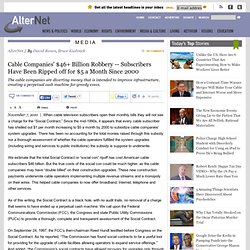 Join our email list: Stay up to date with the latest headlines via email. Guest Post: Mortgages Were Pledged to Multiple Buyers at the Same Time. By George Washington Bank of America alleged in a court filing this June: 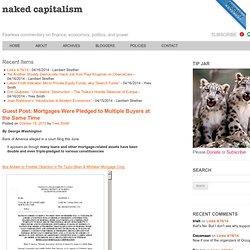 Google 2.4% Rate Shows How $60 Billion Lost to Tax Loopholes. Google Inc. cut its taxes by $3.1 billion in the last three years using a technique that moves most of its foreign profits through Ireland and the Netherlands to Bermuda. 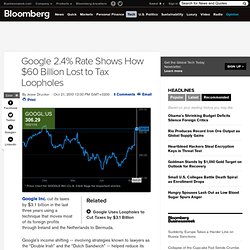 Google’s income shifting -- involving strategies known to lawyers as the “Double Irish” and the “Dutch Sandwich” -- helped reduce its overseas tax rate to 2.4 percent, the lowest of the top five U.S. technology companies by market capitalization, according to regulatory filings in six countries. “It’s remarkable that Google’s effective rate is that low,” said Martin A. Sullivan, a tax economist who formerly worked for the U.S. Treasury Department. “We know this company operates throughout the world mostly in high-tax countries where the average corporate rate is well over 20 percent.” The U.S. corporate income-tax rate is 35 percent. Google, the owner of the world’s most popular search engine, uses a strategy that has gained favor among such companies as Facebook Inc. and Microsoft Corp. Countless Companies. Banking malfeasance Inside the fraud factory. Home | About Us | Our Advertisers | Contact | Subscribe Inside the fraud factory An unwitting foot soldier inthe Wall Street mortgage mega-scam The biggest financial fraud in history If you've ever bought a house or arranged for refinancing pre-2003, you know it's a serious process with lots of people in the room including buyers, sellers, lawyers, real estate agents, mortgage brokers, title company agents and whoever else needs to be in the room to sign the paperwork. 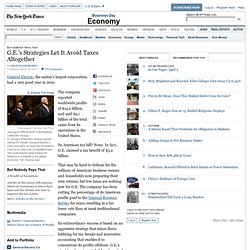 Immelt, General Electric’s chief executive, to head the President’s Council on Jobs and Competitiveness. “He understands what it takes for America to compete in the global economy,” Mr. Obama said. Shocking Fraud from Financial Scum : Good Math, Bad Math. Whistle Blower Comes Forward With Solid Proof The Price Of Gold And Silver Is Being Manipulated By Major Financial Institutions. Pentagon Paid Billions To Contractors Suspended For Fraud. WASHINGTON -- The military paid a total of $285 billion to more than 100 contractors between 2007 and '09, even though those same companies were defrauding taxpayers in the same period, according to a new Defense Department report. Servicer-Driven Foreclosures: The Perfect Crime?