The researchers followed 200 rats over two years, divided into 10 groups each of 10 males and 10 females. The paper and its results, deemed “surprising” because it goes against all of the industry-sponsored research showing the supposed safety of GMOs, caused an immediate stir in the scientific community and online. The editor of the journal, Dr. It is not at all unfair to be cynical about this retraction either. Court: U.S. can bar mad-cow testing. WASHINGTON (AP) — A federal appeals court says the government can prohibit meat packers from testing their animals for mad cow disease. 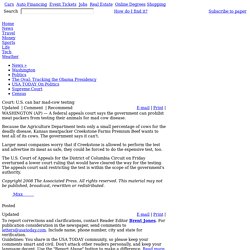 Because the Agriculture Department tests only a small percentage of cows for the deadly disease, Kansas meatpacker Creekstone Farms Premium Beef wants to test all of its cows. The government says it can't. Larger meat companies worry that if Creekstone is allowed to perform the test and advertise its meat as safe, they could be forced to do the expensive test, too.

The U.S. Court of Appeals for the District of Columbia Circuit on Friday overturned a lower court ruling that would have cleared the way for the testing. What A McDonald's Commercial SHOULD Look Like. Yes, There’s Wood Pulp in Burgers…Here’s Why I Think it Matters. Michael KriegerLiberty Blitzkrieg July 2, 2014 On Monday, Quartz published an article by Devin Cohen titled, There is a Secret Ingredient in Your Burgers: Wood Pulp. 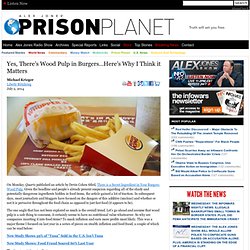 Given the headline and people’s already present suspicion regarding all of the shady and potentially dangerous ingredients hidden in food items, the article gained a lot of traction. In subsequent days, most journalists and bloggers have focused on the dangers of this additive (unclear) and whether or not it is pervasive throughout the food chain as opposed to just fast food (it appears to be). The one angle that has not been explored as much is the overall trend. Let’s go ahead and assume that wood pulp is a safe thing to consume, it certainly seems to have no nutritional value whatsoever. New Study Shows 59% of “Tuna” Sold in the U.S. New Study Shows: Food Fraud Soared 60% Last Year The Quartz article notes that: There may be more fiber in your food than you realized. A d v e r t i s e m e n t. New Study Shows: Food Fraud Soared 60% Last Year. So what is food fraud anyway? 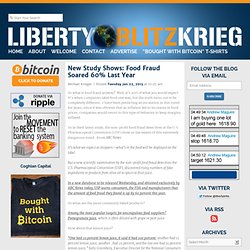 Well, it’s sort of what you would expect. It’s when companies label food one way, but the truth turns out to be completely different. I have been predicting an escalation in this trend for years, since it was obvious that as inflation led to increases in food prices, companies would resort to this type of behavior to keep margins inflated. So in their latest study, the non-profit food fraud detectives at the U.S. Pharmacopeial Convention (USP) show us the extent of this extremely dangerous trend.

It’s what we expect as shoppers—what’s in the food will be displayed on the label. But a new scientific examination by the non-profit food fraud detectives the U.S. In a new database to be released Wednesday, and obtained exclusively by ABC News today, USP warns consumers, the FDA and manufacturers that the amount of food fraud they found is up by 60 percent this year. So what are the most commonly faked products? How about that lemon juice? New Study Shows 59% of “Tuna” Sold in the U.S. Isn’t Tuna.