Types of questions. Probing techniques. Undesirable questions. Pitfalls. Transcript template. Opbouw interview. Aspecten inleiding. Interview omgekeerde fuik. Interview fuik. Brazil. If we explore Brazil´s culture through the lens of the 6-D Model©, we can get a good overview of the deep drivers of Brazilian culture relative to other world cultures. 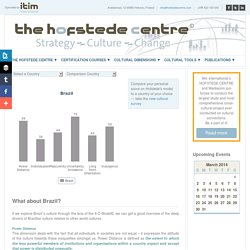 Power DistanceThis dimension deals with the fact that all individuals in societies are not equal – it expresses the attitude of the culture towards these inequalities amongst us. Power Distance is defined as the extent to which the less powerful members of institutions and organisations within a country expect and accept that power is distributed unequally. With a score of 69, Brazil reflects a society that believes hierarchy should be respected and inequalities amongst people are acceptable. The different distribution of power justifies the fact that power holders have more benefits than the less powerful in society. In Brazil it is important to show respect to the elderly (and children take care for their elderly parents). Brazil scores 49, a very intermediate score on this dimension.

Long Term Orientation Indulgence. Brazil netherlands hofdstede comparison. Creativity in Brazilian Schools (Fleith, 2011) Brazilian Culture (from Fleith, 2011) Creativity in the Brazilian Culture. Brazilian Culture, Family, and its Ethnic-Cultural Variety. In lieu of an abstract, here is a brief excerpt of the content: Research on cultural differences and their relationship with family structure has been producing many significant findings in the social sciences, particularly in social and organizational psychology. 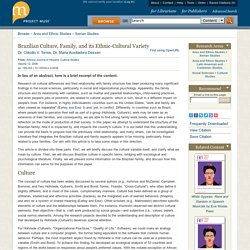 Apparently, the family structure and its relationship with variables, such as marital and parental relationships, child-rearing practices, and even people's jobs or positions, are related to cultural aspects, which in turn, result in a different impact on people's lives. For instance, in highly individualistic countries such as the United States, "work and family are often viewed as separable" (Earley and Erez 3) and, yet, in conflict. This article is divided into three parts. First, we will briefly discuss the cultural variable itself, and clarify what we mean by culture. This dimension refers to the extent to which social groups emphasize personal or group goals. Principles social influence.

Brazilian Organization Culture in a Nutshell. Adapting a business model to a Brazilian reality is a challenge faced by many European companies relocating to Brazil, raising the question: what are the main differences between Brazilian companies and the foreign ones? 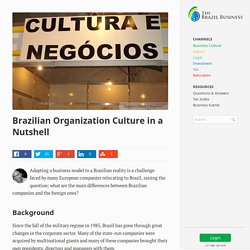 Background Since the fall of the military regime in 1985, Brazil has gone through great changes in the corporate sector. Many of the state-run companies were acquired by multinational giants and many of these companies brought their own presidents, directors and managers with them. Culture and Corporate Law Reform A Case Study of Brazil. 'Having Fun'?: Humour as Resistance in Brazil. Suzana B. 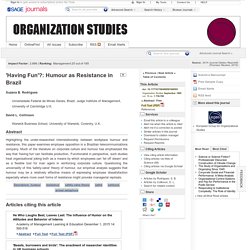 Rodrigues Highlighting the under-researched interrelationship between workplace humour and resistance, this paper examines employee opposition in a Brazilian telecommunications company. Much of the literature on corporate culture and humour has emphasized the way that 'having fun' can facilitate production. Functionalist in perspective, such studies treat organizational joking both as a means by which employees can 'let off steam' and as a flexible tool for man agers in reinforcing corporate culture. Questioning the universality of this 'safety-valve' theory of humour, our empirical analysis suggests that humour may be a relatively effective means of expressing employee dissatisfaction especially where more overt forms of resistance might provoke managerial reprisals.

Dress for Success in Brazil. During the last three decades, Brazil has increased its concern with appearance. 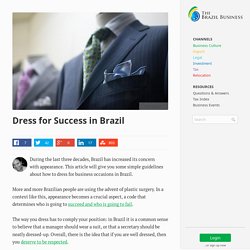 This article will give you some simple guidelines about how to dress for business occasions in Brazil. More and more Brazilian people are using the advent of plastic surgery. In a context like this, appearance becomes a crucial aspect, a code that determines who is going to succeed and who is going to fail. The way you dress has to comply your position: in Brazil it is a common sense to believe that a manager should wear a suit, or that a secretary should be neatly dressed-up. Overall, there is the idea that if you are well dressed, then you deserve to be respected. This concept also applies to business meetings and what you are wearing tells a lot about who you are, your position and even about how serious your intentions are. Everyday Corruption in Brazil. Corruption is often a subject when talking to foreign businessmen that want to do business in Brazil. 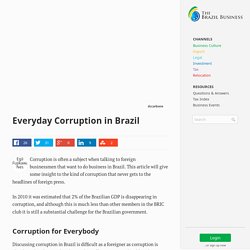 This article will give some insight to the kind of corruption that never gets to the headlines of foreign press. In 2010 it was estimated that 2% of the Brazilian GDP is disappearing in corruption, and although this is much less than other members in the BRIC club it is still a substantial challenge for the Brazilian government. Corruption for Everybody. 7 Ways Brazilians Work Differently than Americans. Simone is Founder and President of a company, OpenPath Solutions, based in Atlanta. 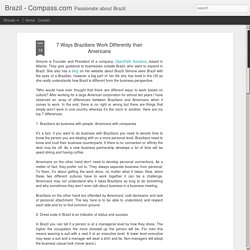 They give guidance to businesses outside Brazil, who want to expand in Brazil. She also has a blog on her website about Brazil! Simone sees Brazil with the eyes of a Brazilian, however a big part of her life she has lived in the US so she really understands how Brazil is different from the business perspective.