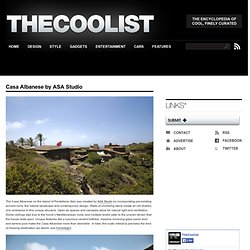 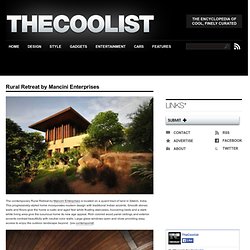 THE FISH HOUSE. One Darn Cool Pool. Swimming At The Casa Devoto (Devoto House) In Argentina. ShareThis Andres Remy Architects designed this private residence for a couple with two children in Devoto, Argentina. 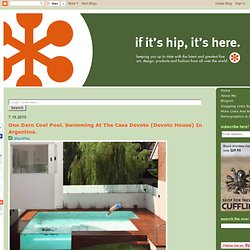 The home, situated on an 18 x 24 meter lot, is a modern, luxurious home with an open floor plan, most of which has angles which allow one to view the unusual above ground pool. While the entire home is nicely designed, it's the pool that I was really drawn to. With it's see-through window, flush wooden deck and split level interior. The pool reminds me of one of my other favorite swimming pools (I have many). See all of Casa Devoto here.

House With a Swimmingpool on The Roof and Panoramic View of The Surroundings. Can you imagine looking at the ocean during the day and up at the stars durning the night while chilling in the pool on the roof of your house? 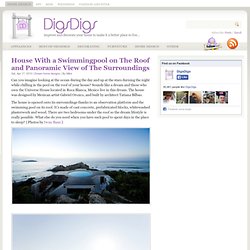 Sounds like a dream and those who own the Universe House located in Roca Blanca, Mexico live in this dream. The house was designed by Mexican artist Gabriel Orozco, and built by architect Tatiana Bilbao. The house is opened onto its surroundings thanks to an observation platform and the swimming pool on its roof. It’s made of cast concrete, prefabricated blocks, whitewashed plasterwork and wood. Who Doesn’t Want To Live In This Dream House? Mirindiba House by Marcio Kogan. Mirindiba House by Marcio Kogan When it comes to residential architecture in 21st century Brazil, few are as gifted as Marcio Kogan. 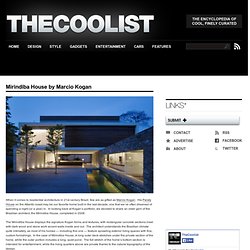 Villa Amanzi by Adrian McCarroll, Waiman Cheung, Jamie Jamieson. Imaginative Architecture in Natural Seclusion This swanky villa has got it goin’ on. 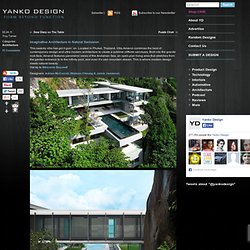 Located in Phuket, Thailand, Villa Amanzi combines the best of contemporary design and ultra modern architecture to create a sublime cliffside sanctuary. Built into the granite rock face, Amanzi features panoramic views of the Andaman Sea, an open-plan living area that stretches from the garden entrance to to the infinity pool, and even it’s own mountain stream. This is where modern design meets natural beauty. Hat tip to Welcome Beyond! Designers: Adrian McCarroll, Waiman Cheung & Jamie Jamieson.

McLean Quinlan Architects - Stow On The Wold. A radical approach was required for this converted barn sited in open countryside. 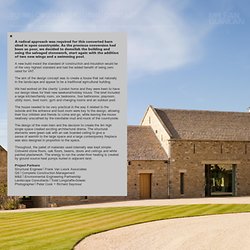 As the previous conversion had been so poor, we decided to demolish the building and using the salvaged stonework, start again with the addition of two new wings and a swimming pool. A new build meant the standard of construction and insulation would be of the very highest standard and had the added benefit of being zero rated for VAT. The aim of the design concept was to create a house that sat naturally in the landscape and appear to be a traditional agricultural building.

We had worked on the clients’ London home and they were keen to have our design ideas for their new weekend/holiday house. The brief included a large kitchen/family room, six bedrooms, four bathrooms, playroom, utility room, boot room, gym and changing rooms and an outdoor pool. Really funny stuff - Modern houses. When Hollywood is at your feet (76 pics)

Hidden In Costa Rica's Rain Forest... (15 photos) It's impossible not to fall in love with this eco-friendly house, hidden on a coastal hillside in Costa Rica. 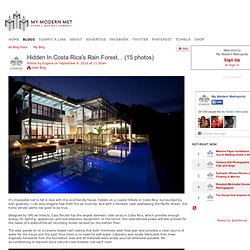 Luxury Home For Sale in Whistler « Luxury Furniture, Property, Travel & Interior Design. Luxury woodland property in Whistler Sothebys Realty Canada have recently listed this luxury property situated in the prestigious location of Whistler for sale at a price of $14,995,000. 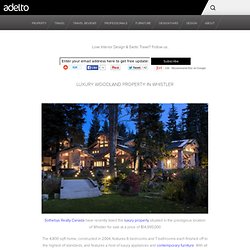 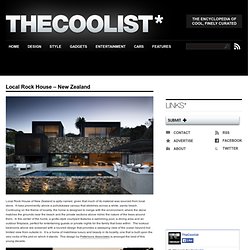 It rises prominently above a pohutukawa canopy that stretches across a white, sandy beach. Fabulous Colani Spanish Villa by Luigi Colani. To describe Villa Colani using only “dry facts” would not do justice to this superlative estate. The spectacular residence located in a quiet and safe posh Nova Santa Ponsa area, Mallorca, Spain was created by famous German based designer Luigi Colani. It offers splendid and breathtaking South-West ocean views from every room. There is about 10,700 sq ft of living space that includes a spherical kitchen for which the appliances were designed by Sheer and flown in from Italy.