Games « you found me. 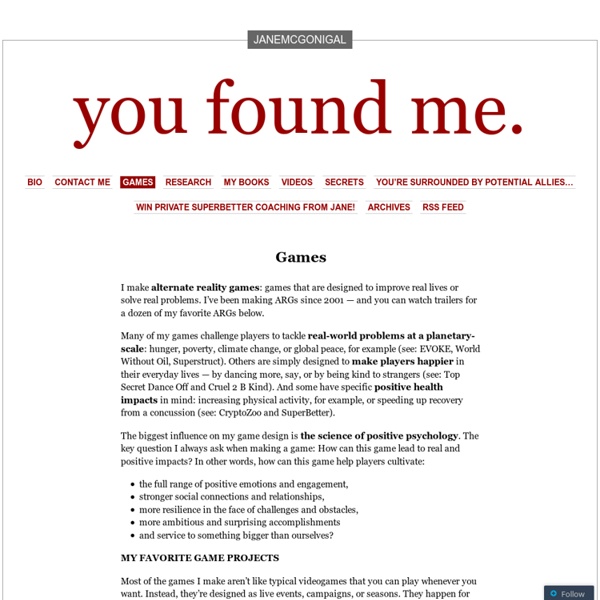 I make alternate reality games: games that are designed to improve real lives or solve real problems. I’ve been making ARGs since 2001 — and you can watch trailers for a dozen of my favorite ARGs below. Many of my games challenge players to tackle real-world problems at a planetary-scale: hunger, poverty, climate change, or global peace, for example (see: EVOKE, World Without Oil, Superstruct). Others are simply designed to make players happier in their everyday lives — by dancing more, say, or by being kind to strangers (see: Top Secret Dance Off and Cruel 2 B Kind). The biggest influence on my game design is the science of positive psychology. the full range of positive emotions and engagement,stronger social connections and relationships,more resilience in the face of challenges and obstacles,more ambitious and surprising accomplishmentsand service to something bigger than ourselves? Most of the games I make aren’t like typical videogames that you can play whenever you want.

GDC: Hecker's Nightmare Scenario - A Future Of Rewarding Players For Dull Tasks It's possible that an over-reliance on metrics-driven design and extrinsic rewards for in-game actions could lead to a future of "designing shitty games that you have to pay people to play," warns independent developer Chris Hecker. Hecker, who is currently working on the espionage-themed multiplayer game SpyParty, presented his hypothetical "nightmare self-fulfilling scenario" as part of a talk inquisitively titled "Achievements Considered Harmful?" during Game Developers Conference in San Francisco. Hecker based his talk on a large volume of often-conflicting psychological studies about the effects of intrinsic and extrinsic rewards, but he was quick to preface his hypothesis by noting that "there are no direct studies" about the topic as it specifically relates to video games, and he called for more research into the effects of reward structures in design. "You want to make an intrinsically interesting game," he said of game designers at large.

Game Theory .net - Resources for Learning and Teaching Strategy for Business and Life Syllabus « Gaming the Classroom Indiana University, Bloomington Department of Telecommunications T366: Multiplayer Game Design Section 13353 Spring 2010 Email: clsheldo@indiana.edu Description Focus is on massively-multiplayer online games and virtual worlds. Students will be introduced to the design elements and production requirements necessary to create and maintain online games. Class time will be divided between fighting monsters (Quizzes, Exams etc.), completing quests (Presentations of Games, Research etc.) and crafting (Personal Game Premises, Game Analysis Papers, Video Game Concept Document etc.). At the beginning of the semester everyone in the class will choose and name their avatars. Grading Procedure You will begin on the first day of class as a Level One avatar. *Your level will be determined by experience points (XP) on a 2000 XP scale. · Solo: Craft your own game proposal. 1. Grading is rigorous. Attendance and Conduct You are expected to attend every class. Required TextDesigning Virtual Worlds.