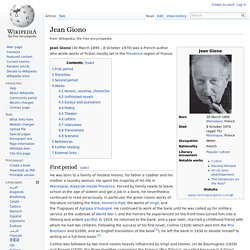 First period[edit] He was born to a family of modest means, his father a cobbler and his mother a laundry woman. Comets & Barricades: Insurrectionary Imagination in Exile. Imagine history as an infernal kaleidoscopic system in which capital and its cops eternally return to shut down all possibilities of freedom. 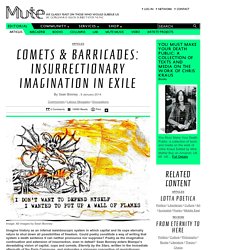 Could poetry constitute a way of writing that system a death sentence it can neither pronounce nor suppress? Poetry as the imaginative continuation and extension of insurrection, even in defeat? Sean Bonney enters Blanqui’s devastating vision of capital, cops and comets, Eternity by the Stars, written in the immediate aftermath of the Paris Commune, and elaborates a visionary conception of revolutionary poetics and the poetry of revolution Let every word indicate the most frightening of distances, it would still take billions of centuries, talking at one word per second, to express a distance which is only an insignificance when it comes to infinity.i – Louis-Auguste Blanqui, Eternity by the Stars.

Pound Won't Change You - CAMPUS. Do people read the Cantos and change their politics or their approach to economics? 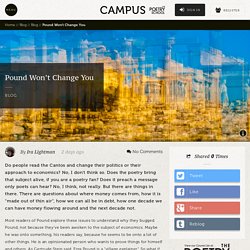 No, I don’t think so. Does the poetry bring that subject alive, if you are a poetry fan? Does it preach a message only poets can hear? No, I think, not really. But there are things in there. A Defence of Poetry by Percy Bysshe Shelley. Introduction Percy Bysshe Shelley was born to a wealthy family in Sussex, England. 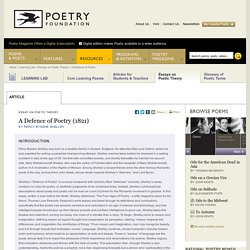 He attended Eton and Oxford, where he was expelled for writing a pamphlet championing atheism.

Andre Breton. Victor Hugo. The long read: How the First World War changed English poetry. We soldiers have our views of life to express, though the boom of death is in our ears. 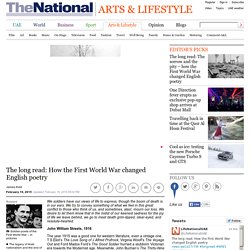 We try to convey something of what we feel in this great conflict to those who think of us, and sometimes, alas! , mourn our loss. We desire to let them know that in the midst of our keenest sadness for the joy of life we leave behind, we go to meet death grim-lipped, clear-eyed, and resolute-hearted. John William Streets, 1916 The year 1915 was a good one for western literature, even a vintage one.

Click here to view the photo gallery. Literary theory. Literary theory in a strict sense is the systematic study of the nature of literature and of the methods for analyzing literature.[1] However, literary scholarship since the 19th century often includes—in addition to, or even instead of literary theory in the strict sense—considerations of intellectual history, moral philosophy, social prophecy, and other interdisciplinary themes which are of relevance to the way humans interpret meaning.[1] In humanities in modern academia, the latter style of scholarship is an outgrowth of critical theory and is often called simply "theory. 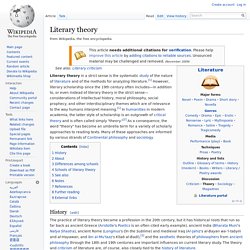 "[2] As a consequence, the word "theory" has become an umbrella term for a variety of scholarly approaches to reading texts. Many of these approaches are informed by various strands of Continental philosophy and sociology. History[edit] About[edit] Differences among schools[edit] On John Crowe Ransom. Anthimeria. In rhetoric, anthimeria, traditionally and more properly called antimeria (from the Greek: ἀντί, antí, "against, opposite" and μέρος, méros, "part"), is any novel change in a word's use, most commonly the use of a noun as if it were a verb.[1][2] Modern Examples[edit] There are a number of examples throughout the English language that demonstrate the evolution of specific words from one lexical category to another. 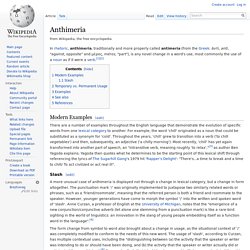 For example, the word 'chill' originated as a noun that could be substituted as a synonym for 'cold'. Throughout the years, 'chill' grew to transition into a verb ('to chill vegetables') and then, subsequently, an adjective ('a chilly morning'). Slash[edit] The form change from symbol to word also brought about a change in usage, as the situational context of '/' was completely modified to conform to the needs of this new word. PoemShape. Literary Devices and Literary Terms. The Pursuit of Form by Robert Pinsky. Paul Klee, "Burg und Sonne" (cropped) EDITORS' NOTE: This essay was originally published in Singing School: Learning How to Write (and Read) Poetry by Studying with the Masters (W.W. 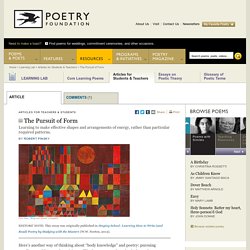 Norton, 2013). Here’s another way of thinking about “body knowledge” and poetry: pursuing excellence, athletes and musicians willingly, even eagerly, submit themselves to tedious, grinding repetition and analysis. They try to cultivate by practice the most effective way of doing each thing, each best movement so reliably summoned that you don’t need to think about it in the fluid, immediate, rapid, intuitive performance of your skills.

The goal, in a word used by those who work in these pursuits: to perfect their form. But beyond that process, or extending it, true form is creative. In keeping with that flexibility, form should be transformative and original. John Crowe Ransom. Photo: Robbie Mcauley John Crowe Ransom was one of the leading poets of his generation. 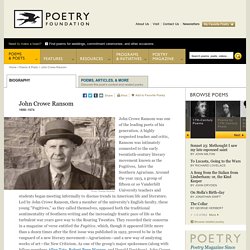 A highly respected teacher and critic, Ransom was intimately connected to the early twentieth-century literary movement known as the Fugitives, later the Southern Agrarians. Around the year 1915, a group of fifteen or so Vanderbilt University teachers and students began meeting informally to discuss trends in American life and literature. Led by John Crowe Ransom, then a member of the university's English faculty, these young "Fugitives," as they called themselves, opposed both the traditional sentimentality of Southern writing and the increasingly frantic pace of life as the turbulent war years gave way to the Roaring Twenties.

As far as Ransom and his fellow Agrarians were concerned, noted John L. Hughes on Form. 71, Ted Hughes. Ted Hughes lives with his wife, Carol, on a farm in Devonshire. 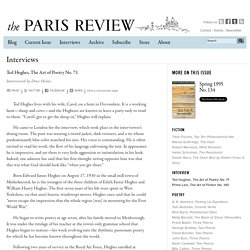 It is a working farm—sheep and cows—and the Hugheses are known to leave a party early to tend to them. “Carol’s got to get the sheep in,” Hughes will explain. He came to London for the interview, which took place in the interviewer’s dining room. Scale of vowels. A scale of vowels is an arrangement of vowels in order of perceived "pitch". A scale used for poetry in American English lists the vowels by the frequency of the second formant (the higher of the two overtones that define a vowel sound). Starting with the highest, In technical terms, this listing goes from front vowels to back vowels. It is by no means precise enough for phonology. For one thing, the sounds with [ʊ] or [ɪ] as the second symbol are diphthongs, during which the formants change.

Her right side is yellow, for Mawng, her own language; most of her left leg is green, for Gunwingku, her mother's language; and there's a small patch of pink on that shoulder for her great-grandmother's Ndjeebbana. Ngalmindjalmag lives on one of the Goulburn Islands, a small area off the north coast of Australia populated mostly by aboriginals such as herself. The islands have dozens of languages, some of them with only one speaker. Language Matters, a feature documentary that airs this month on PBS, shows the community's efforts to preserve their language along with those of the Hawaiians and the Welsh, efforts that often involve unlikely alliances between science and art. You've always been interested in how different languages are themselves media. Sonority hierarchy. Sonority hierarchy[edit] Sonority hierarchies vary somewhat in which sounds are grouped together.

The one below is fairly typical: Sound types are the most sonorous on the left side of the scale, and become progressively less sonorous towards the right (e.g., fricatives are less sonorous than nasals). The labels on the left refer to distinctive features, and categories of sounds can be grouped together according to whether they share a feature. Back Vowels. Six Lectures on Sound and Meaning. Roman Jakobson (1942) Six Lectures on Sound and Meaning. Kenning. They usually consist of two words, and are often hyphenated. For example, Old Norse poets might replace sverð, the regular word for “sword”, with a more abstract compound such as “wound-hoe” (Egill Skallagrímsson: Höfuðlausn 8), or a genitive phrase such as randa íss “ice of shields” (Einarr Skúlason: ‘Øxarflokkr’ 9). Fiona Sampson on Alice Oswald. Theodore Roethke. Influences. Roethke/Eliot - Imitation. "A MAMMAL GALLERY" by Michael McClure.

Alcheringa Archive: A Journal of Ethnopoetics 1970-1980. David Abram on animism. David Abram on poetry. Verse etymology. From Rilke. The Alliance for Wild Ethics. A map. The Ecology of Magic - An Interview with David Abram. David Abram is an unusual combination of anthropologist, philosopher and sleight-of-hand magician. Though he worked as a magician in the United States and Europe for a number of years, he attributes most of what he knows about magic to the time he spent in Indonesia, Nepal and Sri Lanka learning from indigenous medicine people.

This interview was adapted from the public radio series "Insight & Outlook. " Performing magic is not simply about entertaining, he points out in this interview. "The task of the magician is to startle our senses and free us from outmoded ways of thinking. " The magician also plays an important ecological function, he says, by mediating between the human world and the "more-than-human" world that we inhabit. Snyder_politics.pdf. Table of Nodes in Pathways Project. On Ted Hughes. Poet of the spirits of the land. E T H N O P O E T I C S. The breakthroughs of the last 100 years in poetry and elsewhere have been marked by new approaches to language and performance. Ethnopoetics. A need for ethnopoetics: Rothenberg[edit] Jerome Rothenberg coined the term ethnopoetics in the 1960s. According to Catherine S.

Quick, Rothenberg had recognized that “most translations of Native American oral traditions . . . failed to capture the power and beauty of the oral performances on the written page,” especially when “Western poetic styles” were imposed upon these written texts (1999, 96).[1] Rothenberg’s influence has increased public awareness of the rich narrative and poetic traditions of cultures all over the world. Ethnopoetic theory: Tedlock and Hymes[edit] Practitioners' Voices in Classical Reception Studies. Projective Verse by Charles Olson.

Introduction. Essay on experimental beat poet's concerns with environmentalism and eccology. How to Write Poetry: a List of Various Guides, Primers, Essays and Introductions - CAMPUS. Poetry School staff doing some ‘very important’ poetry-based research on Facebook one recent lunchtime noticed an interesting thread populating itself on Allison McVety’s page. Interview with Alice Oswald. Interview with Alice Oswald ALICE OSWALD IS A BRITISH POET WHO LIVES IN DEVON with her family. Newspaper profiles will inevitably mention the fact that after studying classics at Oxford she worked as a gardener. In fairness, her time working as a gardener was hugely important to her poetic development. “I see it feelingly.”