The 50 most interesting articles on Wikipedia « Copybot 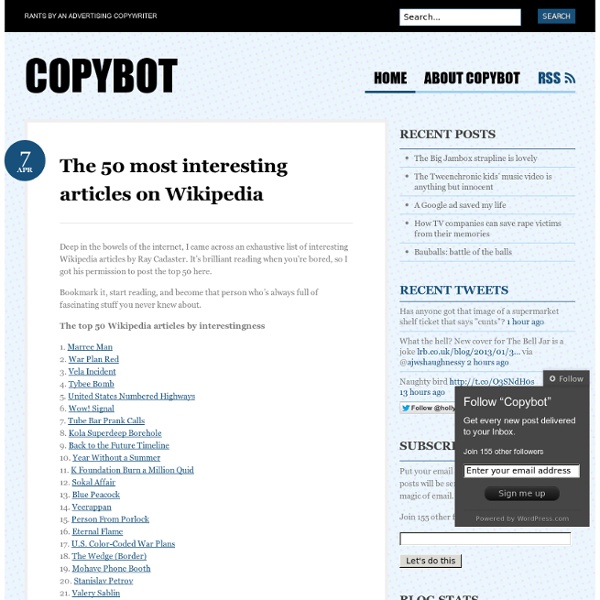 Deep in the bowels of the internet, I came across an exhaustive list of interesting Wikipedia articles by Ray Cadaster. It’s brilliant reading when you’re bored, so I got his permission to post the top 50 here. Bookmark it, start reading, and become that person who’s always full of fascinating stuff you never knew about. The top 50 Wikipedia articles by interestingness 1. Marree Man 2. *Copybot is not responsible for the hours and hours that disappeared while you were exploring this list. Edit: If you enjoyed this list, I’ve since posted 50 more of Wikipedia’s most interesting articles. Like this: Like Loading... Related Picking flicks About six months ago, it dawned on me that whenever someone asked me if I'd seen a particular film, my answer was almost invariably no. In "Copybot articles"

How To Be A Successful Evil Overlord How to be a Successful Evil Overlord by Peter Anspach Being an Evil Overlord seems to be a good career choice. It pays well, there are all sorts of perks and you can set your own hours. However every Evil Overlord I've read about in books or seen in movies invariably gets overthrown and destroyed in the end. I've noticed that no matter whether they are barbarian lords, deranged wizards, mad scientists, or alien invaders, they always seem to make the same basic mistakes every single time. With that in mind, allow me to present...

Game theory Game theory is the study of strategic decision making. Specifically, it is "the study of mathematical models of conflict and cooperation between intelligent rational decision-makers."[1] An alternative term suggested "as a more descriptive name for the discipline" is interactive decision theory.[2] Game theory is mainly used in economics, political science, and psychology, as well as logic, computer science, and biology. The subject first addressed zero-sum games, such that one person's gains exactly equal net losses of the other participant or participants. Top 40 Useful Sites To Learn New Skills The web is a powerful resource that can easily help you learn new skills. You just have to know where to look. Sure, you can use Google, Yahoo, or Bing to search for sites where you can learn new skills , but I figured I’d save you some time. Here are the top 40 sites I have personally used over the last few years when I want to learn something new.

True Facts Facts - interesting, provocative, well-seasoned One out of ten children in Europe are conceived on an IKEA bed. Antarctica is the only continent without reptiles or snakes. Amazing Places To Experience Around The Globe (Part 1) Preachers Rock, Preikestolen, Norway Blue Caves - Zakynthos Island, Greece Skaftafeli - Iceland Plitvice Lakes – Croatia Dwight Schrute Knows Best Oh Dwight, you are the best thing to happen to the US version of The Office. The wry second-in-command at the Scranton office of Dunder Mifflin is famous for his obscure knowledge and comically literal interpretation of… well… everything. And so the Dwight Schrute Knows Best meme or simply, the Dwight Schrute meme was born: Enjoy the Dwight Schrute meme? Another View: The Science and Strategy of College Recruiting Andrew Sullivan for The New York TimesA statue of Nathan Hale on Yale’s Old Campus. Marina Keegan is a senior English major in the writing concentration at Yale University. NEW HAVEN — Last May, one of the largest hedge funds in the world paid me $100 to eat gourmet popcorn and explain why I wasn’t applying for one of its (lucrative!) jobs. As I sat in a hotel suite with six other Yale students – musicians, biologists, dramatists, other-ists – and answered questions about my future plans, I got this uneasy feeling that the man in the beautiful suit was going to take my Hopes and Dreams back to some lab to figure out the best way to crush them.

This Sci-Fi Touchscreen Can Give The iPhone Real Buttons Most of us have adjusted to life with touchscreens. They lack tactile feedback, the rubber nubs that enable thoughtless use of our television remotes, but touchscreens create dynamic virtual buttons and open up vital screen real estate. They’re worth the thumb-numbing tradeoff. But what if we could have both, a dynamic touchscreen with real buttons? Impossible? Not at all.

Machine Scans Twitter For Mentions Of Fruit, Then Turns Them Into Smoothies We tend to think of data in one way: numbers. We can change the fonts, or we can graph them out. Maybe we can even use advanced visualization to make someone really grasp a particular figure. But numbers are always using one sense: sight. Could meaningful data be consumed in other ways?