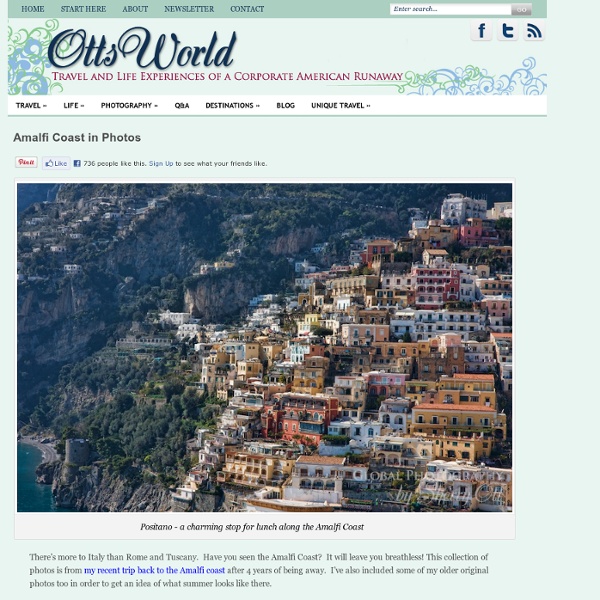 Positano - a charming stop for lunch along the Amalfi Coast There’s more to Italy than Rome and Tuscany. Have you seen the Amalfi Coast? It will leave you breathless! This collection of photos is from my recent trip back to the Amalfi coast after 4 years of being away. I’ve also included some of my older original photos too in order to get an idea of what summer looks like there. Typical pottery sold along the seaside town of the Amalfi coast The cliffs of Sorrento, one of the main towns along the coast The ancient streets of Pompeii - an easy stop along the Circumvesuviana Train The hill town of Positano Cook up some dishes at Mami Camilla's cooking school near Sorrento Beach cabanas in Sorrento - a popular beach in the summer The villagers (plaster cast) of Pompeii caught in the eruption The Sorrento coastline is a boating paradise Old door in Positano Get out of Rome and visit the Amalfi Coast! For more great information on the Amalfi Cost – check out Italylouge.com

Best Hotels of 2012 – TripAdvisor Travelers’ Choice Awards See all winners View winners as slideshow 25 of 25 2 of 25 “Few grand hotels seamlessly blend old-world charm and modern conveniences as well as the Kronenhof. Neuschwanstein.jpg (1600×1200) Neuschwanstein Castle is a 19th-century Romanesque Revival palace on a rugged hill above the village of Hohenschwangau near Füssen in southwest Bavaria, Germany. The palace was commissioned by Ludwig II of Bavaria as a retreat and as an homage to Richard Wagner. Contrary to common belief, Ludwig paid for the palace out of his personal fortune and extensive borrowing, not with Bavarian public funds. The palace was intended as a personal refuge for the reclusive king, but it was opened to the paying public immediately after his death in 1886. Since then over 60 million people have visited Neuschwanstein Castle. More than 1.3 million people visit annually, with up to 6,000 per day in the summer.The palace has appeared prominently in several movies and was the inspiration for Disneyland’s Sleeping Beauty Castle and later, similar structures.

25 Beauty Tips Reusing Household Items - Homemade Beauty Tips on ELLE 1. Old Buttons Repurpose spare buttons by using them to keep pairs of earrings together: Most buttons have at least two holes in them, so simply place an earring in each opening to neatly store when not wearing. Photo: Jupiter Images 2. Spectacular Surrealistic Paintings by Vladimir Kush from Russia Spectacular Surrealistic Paintings by Vladimir Kush from Russia Russian artist Vladimir Kush was born in Moscow and is a surrealist painter and sculptor. He defines his art as metaphorical realism instead surrealism. His paintings are fascinated by fantasy stories.

Melissani Undercover Cave and Lake One of the Ionian islands in Greece, Kefalonia is definitely the greenest and greatest. There’s great quantity of gorgeous nature and breathtaking landscape there. Vacationers and travelers who arrive here are fascinated by the magnificent rugged mountain ranges and also the valleys in between them which are full of number of vineyards. Just one of Kefalonia’s many well known sightseeing and tours points of interest that travelers can enjoy during their vacation is Melissani Lake. This massive underground cave was formed around one thousand years ago when the ceiling of a huge cave system broke down and tumbled in the sea beneath it uncovering the clear blue waters on the wonderful sunlight above.

Desserts That Are Almost Too Cute To Eat & Pretty Please Us Blog: Your guide to fashion, beauty, style & everything else in between. Hi, my name is Himani and I’m a sugar addict. But the only thing that holds me back from devouring a sinful concoction is if it looks super cute. You know… because cute desserts deserve to live longer than the ugly ones (I’m going to some sort of sugar-y hell for that one). Check out some of the cute desserts that you will think twice before you put them in your belly: Football themed Chocolate Covered Strawberries (purchase) or (make your own). The Astounding Design Of Eixample, Barcelona Constructed in the early 20th century, Eixample is a district of the Spanish city of Barcelona known for the urban planning that divided the district into octagonal blocks. Influenced by a range of schools of architecture, Eixample Barcelona was designed in a grid pattern with long streets, wide avenues, and rounded street corners. Despite being in the center of a thriving European metropolis, the district provides improved living conditions for inhabitants including extensive sun light, improved ventilation, and more open green space for public use. And of course, the result from the grid-like structure is astounding from above: