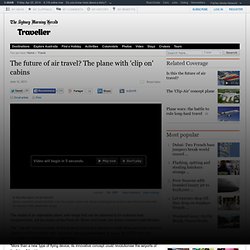 Swiss inventors unveil futuristic Clip Air project, which will allow passengers to board a train that converts into an airplane with attachable wings. 12, 2013 The model of an adjustable plane, with wings that can be attached to for instance train compartments, will be shown at the Paris Air Show next week, the Swiss inventors said Monday. The "Clip-Air" project is fresh off the drawing board and features a single flying wing that could be clipped onto for instance train "capsules" carrying passengers or cargo, the EPFL technical university in Lausanne said in a statement. Www.forumforthefuture.org/sites/default/files/images/Forum/Projects/Tourism2023/Tourism_2023_full_report_web_version.pdf.

Would you get into a plane with no pilot? Tests begin on next-generation of civilian aircraft controlled by REMOTE. Civilian aircraft would use same pilotless technology as military dronesIt could slash costs of air travel and make possible new airborne servicesGovernment-backed £62m project begins testing over Scotland next month By Damien Gayle Published: 09:46 GMT, 27 November 2012 | Updated: 17:10 GMT, 28 November 2012 The passenger aircraft of the future could one day be flown by remote by pilots sitting in a control room hundreds of miles away. 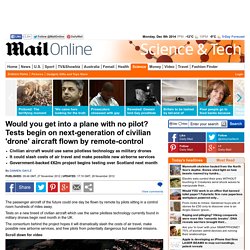 Tests on a new breed of civilian aircraft which use the same pilotless technology currently found in military drones begin next month in the UK. The consortium behind the project hopes it will dramatically slash the costs of air travel, make possible new airborne services, and free pilots from potentially dangerous but essential missions. SurfAir – the Uber of the skies. SurfAir SurfAir is a new airline hoping to deliver some overdue disruption to the not-so-friendly skies.The fast growing year old company is a subscription-based model for private planes, but it’s at a price point that could actually be accessible for frequent fliers. 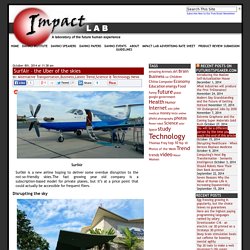 Disrupting the sky It’s no coincidence that SurfAir has a partnership with Uber; it’s already been referred to as a kind of Uber for flying, but in a way it’s more like the subscription-based policies of Netflix. Members pay a one-time $1,000 fee to join, and then $1,750 per month to fly limitless trips to six destinations on the West Coast. Is it worth it? Passenger pods in cabins: Is this the future of air travel? Concept plane cabin design would see air travellers sit stacked on top of one another inside individual pods. 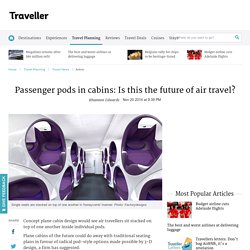 Plane cabins of the future could do away with traditional seating plans in favour of radical pod-style options made possible by 3-D design, a firm has suggested. London-based Factorydesign is behind the Air Lair (pictured above), which sees single seats stacked on top of one another in a "honeycomb-like" manner. It created a prototype for Zodiac Seats, a company that supplies first and business class seating for airlines. The pod layout would benefit single travellers who want to have minimal interaction with others while in the air, Adam White, Factorydesign's director, told Skift.com. 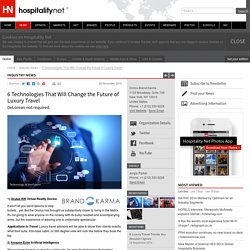 Technology of the Future 1) Oculus Rift Virtual Reality Device It won't let you bend spoons or stop bullets... yet. But the Oculus has brought us substantially closer to living in the Matrix. It's not going to wow anyone on the runway with its bulky headset and accompanying wires, but the experience of wearing one is undeniably spectacular. Applications to Travel: Luxury travel advisors will be able to show their clients exactly what their suite, first-class cabin, or 360 degree view will look like before they book the trip. 2) Amazon Echo Artificial Intelligence We no longer have to journey to a galaxy far, far away for technology that makes travelling more convenient.

Applications to Travel: Imagine an Amazon Echo in every hotel room as the front-line concierge, with personalized knowledge of each guest's needs. 3) Da Vinci 3D Printing Once limited to the realm of magic, mass produced bespoke products are now possible with the advent of 3D printing. Spaceport Australia prepares for lift-off. Plans are afoot to establish a spaceport in Australia. 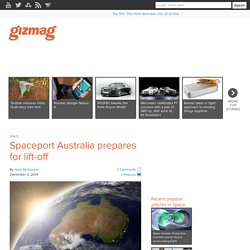 The town of Rockhampton in Queensland is one of three locations currently being considered as a potential site for the base, which would focus primarily on space tourism. Speaking to Gizmag, John Moody of Spaceport Australia said that the facility would cater for both government and private enterprise using air launch vehicles for space burials and other space tourism activities, and eventually establishing an offsite launch terminal for the delivery of nano satellites to orbit. Operators such as XCOR Lynx and S3 Systems are being canvassed as potential participants in the venture. While the location has not been finalized, Moody says that Rockhampton is favored because of its proximity to the state's capital, Brisbane, and the fact that it has an existing airport which is currently used by the military and its a short distance from the ocean. 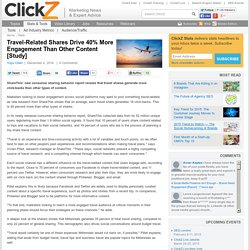 Marketers looking to boost engagement across social platforms may want to post something travel-related, as new research from ShareThis shows that on average, each travel share generates 18 click-backs. This is 40 percent more than other types of shares. In its newly released consumer sharing behavior report, ShareThis collected data from its 52 million unique users registering more than 1.9 billion social signals. The Future of Air Travel, as Seen from MIT. Predictions about tomorrow’s technology often miss the mark, but when a panel of experts like the one assembled recently to celebrate 100 years of aerospace research at MIT gazes into the crystal ball, we can’t help but pay attention. 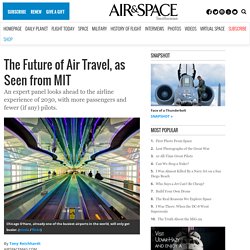 The panelists—all MIT faculty members or graduates who now hold top positions in the aerospace industry—foresaw steady improvement in aeronautics technology. No surprise there. But they also agreed that an expected sharp rise in global air traffic, combined with stricter environmental regulation, pose formidable challenges for future airlines.

MIT aeronautics professor John Hansman said that part of the problem will be improving a system that’s already very efficient, and has achieved a global safety record of just 0.2 accidents in every million departures.