Yebisu, a harry potter fanfic. For the record, Harry is only here for his time-traveling kids. 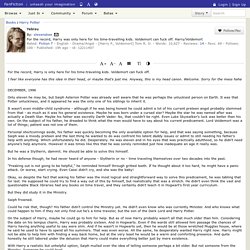 Voldemort can fuck off. Nothing Worth Saying Aloud Chapter 1: Prologue, a naruto fanfic. Disclaimer: I don't own Naruto or any of the characters. 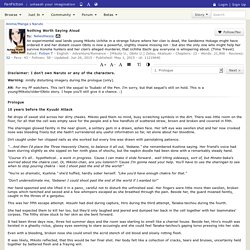 Warning: mildly disturbing imagery during the prologue (only). AN: For my FF watchers. This isn't the sequel to Tsubaki of the Pen. A Brand New Start Chapter 1: The Tide Turned Again, a harry potter fanfic. Chapter 1 The Tide Turned Again AN: a quick thanks to The 5h15 Spaceman for the opening and helping me with the story. 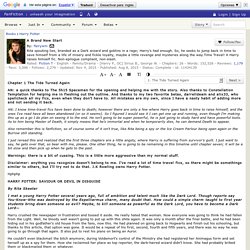 Also thanks to Constellation Temptation for helping me in fleshing out the outline. And thanks to my two favorite betas, darrelldeam and alix33, who spellcheck all my fics, even when they don't have to. The Only Right Choice Chapter 1: I-01: Patience, a mass effect fanfic. Summary: Shepard was a total noob during the first play through. 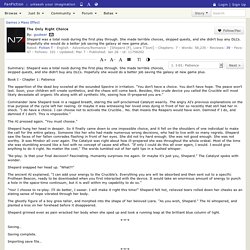 She made terrible choices, skipped quests, and she didn't buy any DLCs. Hopefully she would do a better job saving the galaxy at new game plus. Book I - Chapter 1: Patience The apparition of the dead boy scowled at the wounded Spectre in irritation. To Be a Hero Chapter 1: Setting the Stage, a harry potter fanfic. To Be a Hero Disclaimer: I don't own Harry Potter, and am making no money off of any of this. 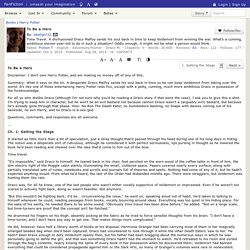 Summary: What it says on the tin. A desperate Draco Malfoy sends his soul back in time so he can keep Voldemort from taking over the world. Whiskey Time Travel Chapter 1, a harry potter fanfic. AN: Don't believe the hype. 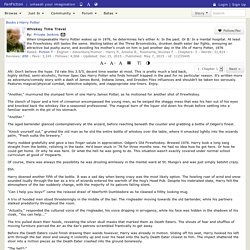 I'd rate this 3.5/5, decent time waster at most. This is pretty much a laid back, highly skilled, semi-alcoholic, former Spec Ops Harry Potter who finds himself trapped in the past for no particular reason. It's written more as adventure/comedy story with a dash of James Bond, Indiana Jones, and Dresden Files influences and shouldn't be taken too seriously. Features magical/physical combat, detective subplots, and inappropriate one-liners. Enjoy. "Another," murmured the slumped form of one Harry James Potter, as he motioned for another shot of firewhiskey. The stench of liquor and a hint of cinnamon encompassed the young man, as he swiped the shaggy mess that was his hair out of his eyes and knocked back the whiskey like a seasoned professional. Take Care Of Yourself Chapter 1: A week and twenty years, a harry potter fanfic. Take Care Of Yourself Chapter one: A week and twenty years [Characters and setting belong to J K Rowling. 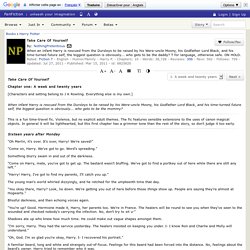 Everything else is my own.] When infant Harry is rescued from the Dursleys to be raised by his Were-uncle Moony, his Godfather Lord Black, and his time-turned future self, the biggest question is obviously... who gets to be the mommy? This is a fun time-travel fic. Sixteen years after Monday. Living an Indoctrinated Dream Chapter 1: Fugue:Waking Dream, a mass effect fanfic. Author's Note This is the first chapter of an idea that has been stewing in my head for a good while. 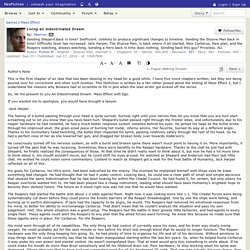 I have five more chapters written, but they are being poured over for corrections and other such niceties. This fanfiction is written by a fan rather pissed about the ending of Mass Effect 3, but I understand the reasons why Bioware had to scramble to fill in plot when the lead writer got kicked off the series. So, let me present to you An Indoctrinated Dream.

Mass Effect with Ego. If you wanted me to apologize, you would have brought a lawyer. -Jack Harper The feeling of a bullet passing through your head is quite surreal. Mass Effect Reloaded Chapter 1, a mass effect fanfic. Updated 26 Nov 2014: So, this story started off as an afterthought. 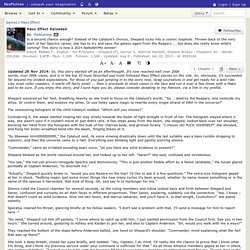 It's now reached well over 200k words, over 500k views, and is in the top 10 most favorited and most followed Mass Effect stories on this site. So, obviously, it's succeeded far beyond my wildest expectations. For those of you just jumping in to the story now, strap yourselves in and get ready for a wild ride. Like most roller coasters, it starts off fairly small ... then it proceeds to shoot canon in the face and run it over a few times with a Mako just to be sure. 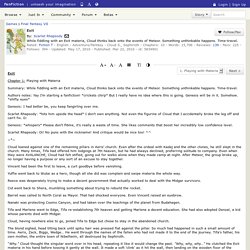 Something unthinkable happens. Time-travel. I didn't sign up for this Chapter 1: Prologue: That bastard, a naruto fanfic. Prologue: That bastard Konoha, early evening The village was settling in for the night, shops closing their doors and bars welcoming the first rush of customers. The academy was empty and quiet, the children having long since gone home. The training grounds were still in use, some of them noisy with thunks of weapons, ninjutsu practise, or Maito Gai. Shinobi could occasionally be seen hopping over rooftops, on messenger duty if not returning or leaving for a mission. Exactly three minutes before ten, the deceptive image of peace and quiet was shattered by a series of loud explosions. Curiously, this did not arouse alarm so much as groans and various complaints in the general line of "not again!

" Time Travel Fun Chapter 1: The Eternal Rivalry, a naruto fanfic. Chapter 1 – Maito Gai & The Eternal Rivalry Maito Gai was not someone who had many issues with his life. Although some would add bullying into the category of 'traumatic experiences', he only saw his less-than-perfect childhood as another aspect of the Springtime of Youth that he had most Youthfully persevered through.

But that didn't mean he had no use for time travel. There was one thing that had always left a black smear on his record, and that was Hatake Kakashi. Although he had eventually become skilled enough at rock-paper-scissors to even out their record, the earlier days had been pitiful. He could change that now. Once More Chapter 1: Back to the Past, a naruto fanfic. DISCLAIMER: I don't own Naruto, or anything publicly recognizable.

Chapter 1: Back to the Past Everything was dark. He had failed. Things were not supposed to become like this. All his training, his friendship with Kurama and all other Tailed Beasts, all the efforts of himself and the whole Shinobi Alliance… They were supposed to win, they were meant to go on, to defeat the mad Uchiha duo and to stop the Juubi from destroying the world! The Wheels Keep On Turning Chapter 1: Call Me Sensei!, a naruto fanfic. Notes: I take liberties with the timeline, but they're not too noticeable. This is not to be taken too seriously. I wouldn't call this fic a 'parody', but I'm also not aiming for a 'super-complex-whoa-that-plot-twist' kind of fic, either. This is just for fun. Also, some people are having trouble with all the time-skips, so I've added the age of the character whose point of view the chapter is in for each chapter, so hopefully that will clear up the confusion.

Please keep in mind that these are my best estimates since the actual timeline is a bit of a mess. Warnings for the whole story: Lots and lots of hair rufflings (You have been warned.) I. "Heh. The amused, smooth baritone easily cuts through their banter, and, despite sparing a moment to wonder how the intruder could get inside their little hut without their noticing, Yahiko, Nagato, and Konan immediately move from their spots on the floor and into a standard formation, kunai held firmly in each of their hands.

Starting Over Chapter 1: Prologue, a naruto fanfic. AN: Hi all, this is my very first fanfiction so please be nice. This story came about as a combination of reading way too much Naruto fanfiction and some ideas I had based around the show and manga. Particularly how focused and balanced as a person Naruto becomes later in life. So enjoy. Prologue In hindsight Naruto realised that his main problem throughout his life was control. Born as an Uzumaki, Naruto naturally had an abnormally high chakra reserve, chakra being the combination of physical and mental energy. If that wasn't enough the nature of the seal placed upon him also contributed to his fundamental difficulty in control.

The defining principle of chakra control means that as chakra is used, not only control is gained but the chakra reserves themselves grow as the mind and body become more harmonised. Oops Chapter 1, a naruto fanfic. I Am NOT Going Through Puberty Again! Chapter 1: Time Travel is a Terrible Idea!, a naruto fanfic. I Am NOT Going Through Puberty Again! Or. Knight of the Force Chapter 1: Prologue, a star wars fanfic. Disclaimer: I do not own Star Wars. It belongs to Disney. I make no money from this story. Free from Force Chapter 1: Death, a star wars fanfic. AN: Hello folks, this is my first star wars fic and I warn you that I've only seen the movies (which are awesome). You're not going to see a lot of mention of non-movie facts but since the fanfic mainly plays before or after the first episode and I'm going to make up the stuff that happens in between, it may collide with whatever comics/books/series exist for that time or the past of secondary characters.

Time MixUp Chapter 1: Prologue: The Four Travelers Embark, a naruto fanfic. Shit. Naruto thought. He'd been captured and incapacitated by Sasuke and his small group of followers and brought to this place so the bat-shit insane Uchiha Madara could extract the Kyuubi from him to complete his stupid plan that involved doing something to the moon which was - according to Madara - some sort of dead ten tailed rock monster that had belonged to some guy called the Sage of the Six Paths. He didn't know what the hell Madara had been on when he had come up with that plan but, he wanted some so he could be completely out of it when the damn furball was extracted.

According to Gaara, the process was extremely painful. Brat, I have a way to get us out of this. said the nine tailed squatter in his belly. L I F E Chapter 1: Say What!, a naruto fanfic. Summary: Uchiha Madara had won. The few surviving members of the Ninja Alliance had been annihilated. In order to save countless of lives and restore balance in the world, a dying Sakura was sent back in time by an utterly unexpected individual. Time Travel. Sakura A bloodied hand twitched. Prevent This!, a naruto fanfic.

"It's a girl! " Sarutobi Biwako proudly exclaimed, holding up a hastily cleaned infant for the new parents to see. "Can we still name her Naruto? " a crying blond asked his beloved wife whom all decisions must be run by or else bad things would happen. Bone of Contention (Old) Chapter 1: Prologue, a naruto fanfic. Bone of Contention. What An Excellent Plan Chapter 1: People Like Me, a naruto fanfic. What An Excellent Plan Obitoオビト In all honesty, Obito didn't quite know why he did what he did. At the tender age of five years old, he found he liked helping people.