Supersonic Submarine Could Travel From Shanghai to San Francisco in 100 Minutes. Submarines are currently the slowcoaches of the travel world, with record speeds of 83kph. 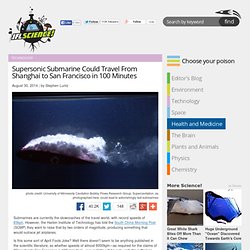 However, the Harbin Institute of Technology has told the South China Morning Post (SCMP) they want to raise that by two orders of magnitude, producing something that would outrace jet airplanes. Is this some sort of April Fools Joke? Well there doesn't seem to be anything published in the scientific literature, so whether speeds of almost 6000kph—as required for the claims of “Shanghai to San Francisco in 100 minutes”—are realistic will have to wait. Nevertheless, the idea Harbin Institute is working on certainly has the potential to improve current speeds substantially. The central idea is called supercavitation, which the Russians are using to fire torpedoes at speeds of hundreds of kilometers an hour, and it is also being explored for surface vessels. The main challenge is to reach speeds at which supercavitation can occur, and then keep it going. 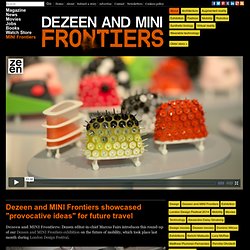 The Dezeen and MINI Frontiers exhibition presented work by six cutting-edge young creatives exploring how design and technology could transform the way we travel. From ubiquitous augmented reality to long-haul space travel, the exhibition featured a series of radical concepts for how we might get around in years to come. "The reaction has been really extraordinary," Fairs says in the movie. "All of these exhibits look really good: they're well designed, they're beautiful. One of the most talked-about pieces on show was a stained-glass driverless car by Dominic Wilcox. "Driverless cars are going to become super safe," Wilcox explains. More Dezeen and Mini Frontiers: AeroMobil flying car creators propose moving traffic to the skies. The creators of a flying car called AeroMobil say that transport networks are "in crisis" and suggest that a potential solution could be shifting road traffic into the skies (+ movie). 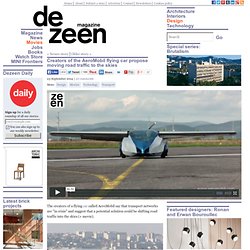 The designers of the AeroMobil, a working "pre-prototype" for a flying car, claim that the vehicle is the "ideal solution" for mid-range journeys and could offer a solution for the congestion problems faced by road users globally. "Most of the personal transport solutions in the world are in crisis," Juraj Vaculik, CEO of the company, which is also called AeroMobil, told Dezeen.

"I think if we can shift some of the road traffic to the air it can make personal transportation more efficient and sustainable. " "A flying car is the ideal solution for middle-distance travel of up to 700 kilometres," industrial designer and chief technical officer of AeroMobil, Stefan Klein told Dezeen. "According to our calculations, there is no better or more efficient solution for door-to-door travel. " Bubbly Carbon Fiber Trike Concept. Bubbly Carbon Fiber Trike Concept The Bemoove concept car is seriously one of those things that you see, stop, and think, what in the hell will they think of next? 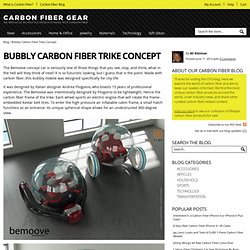 It is so futuristic looking, but I guess that is the point. Made with carbon fiber, this bubbly mobile was designed specifically for city life. It was designed by Italian designer Andrea Filogonio, who boasts 15 years of professional experience. The Bemoove was intentionally designed by Filogonio to be lightweight. For now, the Bemoove is just a concept car and not likely to go into production anytime soon.

[Sources: Yanko Design, Uber Gizmo] The future of travel: what will holidays look like in 2024? What does the future hold for travel? 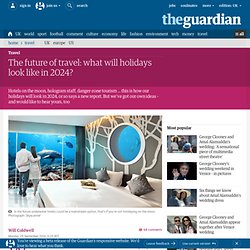 Check-in by robot? Budget space flights? Virtual holidays? Flight comparison site Skyscanner is offering a glimpse of what the 2024 holiday experience could be like with its Future of Travel report. We’ve digested the findings and come up with a few ideas that we think would benefit the world of travel. Hotel room of the future They say: Within 10 years travellers will “have no need to encounter a single human being” from the moment they check in.

We say: Thanks shower, but we’re doing just fine when it comes to washing ourselves. In a nutshell: Computer says: “You’re dirty.” Space travel They say: For the ultimate in “serious traveller bragging rights”, how about a brief time spent floating weightlessly in low Earth orbit? In a nutshell: Get saving. Underwater experiences.