Guide to the Little Karoo, South Africa. Follow the big skies and open roads that lead to South Africa's artsy alternative to the Garden Route - and the closest safari to Cape Town Every big city needs a country retreat, a place of fresh air and pleasures authentic and Wi-Fi-free. 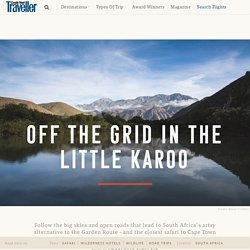 East of Cape Town, the Little Karoo is a 290km strip of semi-desert that trims the edge of the vast wilderness of the Great Karoo. Wedged between the Swartberg mountain range to the north and the Langeberg range to the south, the Klein Karoo is home to dust-bowl towns, sheep farms, river-threaded valleys, dramatic mountain passes and mile upon mile of empty veld.

There is treasure here, if you know where to look. Winchester Mansions - UPDATED 2017 Hotel Reviews & Price Comparison (Cape Town, South Africa) - TripAdvisor. We're finding you the best rooms at the lowest prices from our partner. 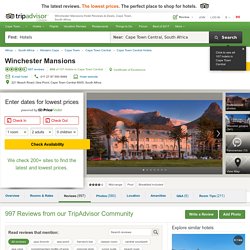 Eastern Europe on a budget: bargains from Poland to Montenegro. Poland’s peaks and forests While Krakow remains Poland’s top destination, with Wrocław increasingly drawing attention as a hip alternative, the country’s vast countryside is a dream setting for a summer holiday. 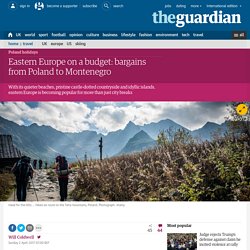 Beer in the capital comes in at just £1.72 a glass and a meal for two costs £30, according to Post Office Travel Money’s latest report, and prices are even lower away from the cities. The vast Masurian Lakes in the north-east can be reached via budget flights to Warsaw, Bydgoszcz or Gdansk for under £100. Giżycko and Mikołajki are the main tourist bases, but the stunning design-led Hotel Galery69 near Olsztyn offers contemporary lakeside luxury from just £40 a night and from there the waters can be explored by bike, kayak or sailing boat.

Those who prefer higher ground should head to the Tatras or Bieszczady mountains in Poland’s south-east, which could easily be combined with a stay in Krakow. Estonian island living Cool Croatia’s calm side It’s cheap when you get there, too. 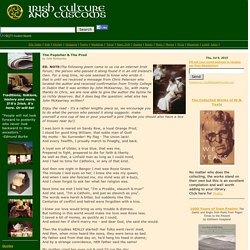 NOTE:The following poem came to us via an internet Irish forum; the person who passed it along found it in an old Ireland's Own. For a long time, no-one seemed to know who wrote it - that is until we received a message from Chris Peterson who located the author and received confirmation from Trinity College in Dublin that it was written by John McKearney. So, with many thanks to Chris, we are now able to give the author the byline he so richly deserves. But it does beg the question: what else has John McKearney written? Enjoy the read - it's a rather lengthy piece so, we encourage you to do what the person who passed it along suggests: make yourself a nice cup of tea or pour yourself a pint (Maybe you should also have a box of tissues near by!) I was born & reared on Sandy Row, a loyal Orange Prod; I stood for good King William, that noble man of God!

And then one night in Bangor I met wee Rosie Green. Hiking the Via Alpina. The Dreiländereck is a popular lookout point in the Alps where the borders of Austria, Italy, and Slovenia were set after the First World War, and from which you can see all three countries. 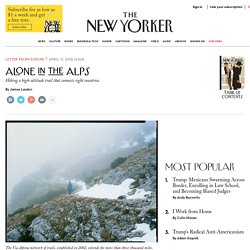 I was there in August, hiking a stretch of the vast trail system known as the Via Alpina. The Austrian sky was a clear pale blue. A few puffy clouds hung above Italy’s Friulian Mountains, to the south. Slovenia, to the southeast, where I was heading, was grayer, with the great wall of the Mangart Massif disappearing into dark mists. It was drizzling when I crossed the Slovenian border, and by the time I reached Triglav National Park—Triglav is Slovenia’s tallest mountain—it was pouring.

Irish Guided Tours Blog. Having completed my first Camino in 2010, as I queued with everyone else outside the Pilgrims Office to receive my Compostela, already with the intention of walking the route again, one of the numerous memories is of being asked, “Where did you start your walk?”. 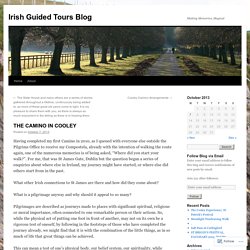 For me, that was St James Gate, Dublin but the question began a series of enquiries about where else in Ireland, my journey might have started, or where else did others start from in the past. What other Irish connections to St James are there and how did they come about? What is a pilgrimage anyway and why should it appeal to so many?

Pilgrimages are described as journeys made to places with significant spiritual, religious or moral importance, often connected to one remarkable person or their actions.