City of Knives and Swords ★ ONLY in JAPAN. Seki Cutlery Festival｜What to See & Do｜Official GIFU Tourism Website. Genbi Shinkansen: The World’s Fastest Moving Museum. All photos courtesy Cedric Riveau When you walk out of a museum you’re usually in the same place where you walked in. 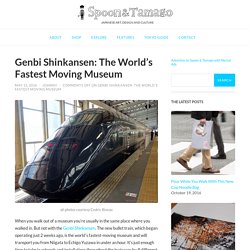 But not with the Genbi Shinkansen. The new bullet train, which began operating just 2 weeks ago, is the world’s fastest-moving museum and will transport you from Niigata to Echigo Yuzawa in under an hour. It’s just enough time to take in artwork and installations throughout the train cars by 8 different artists. the exterior of the train is printed with firework photographs by Mika Ninagawa Tokyo-based photographer Cedric Riveau recently went for a ride, and was kind enough to share his photos with us.

But that’s only the beginning. If you’re heading to the Echigo-Tsumari Art Triennale, this is the perfect way to get in the mood. Even the seating cars are decked out in vibrant prints in one of the lounge cars is “Plane Mirror,” a reflective installation by Yusuke Komuta the kids area is a special interactive playground designed by Paramodel Pin It! Kagoshima Travel Guide. TOKYO FREE GUIDE - Volunteer Tour Guide Service in Tokyo.

Welcome to Sacred Japan. Too late for cherry blossoms in Tokyo? - where to see cherry blossoms. When Japan's weather services issued their first cherry blossom forecasts back in the cold days of January and February, most of them predicted the season in Tokyo to peak in early April. 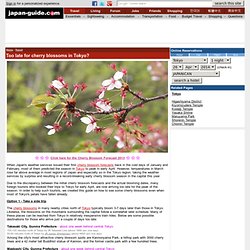 However, temperatures in March rose far above average in most regions of Japan and especially so in the Tokyo region, taking the weather services by surprise and resulting in a record-breaking early cherry blossom season in the capital this year. Due to the discrepancy between the initial cherry blossom forecasts and the actual blooming dates, many foreign tourists who booked their trips to Tokyo for early April, are now arriving too late for the peak of the season.

In order to help such tourists, we created this guide on how to see some cherry blossoms even when most of Tokyo's petals have fallen already. Option 1 - Take a side trip The cherry blossoms in many nearby cities north of Tokyo typically bloom 3-7 days later than those in Tokyo. Pilgrimage on Shikoku Island. Japan Experience. When do the cherry blossoms bloom? When do they bloom? 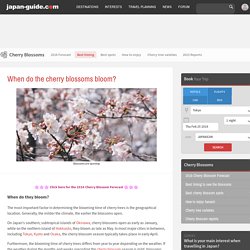 The most important factor in determining the blooming time of cherry trees is the geographical location. Generally, the milder the climate, the earlier the blossoms open. On Japan's southern, subtropical islands of Okinawa, cherry blossoms open as early as January, while on the northern island of Hokkaido, they bloom as late as May. In most major cities in between, including Tokyo, Kyoto and Osaka, the cherry blossom season typically takes place in early April.

Furthermore, the blooming time of cherry trees differs from year to year depending on the weather. Full Bloom How long do they bloom? The cherry blossom season is relatively short. Cherry blossom forecasts Every year, weather services and the media, including japan-guide.com, closely follow the so called "cherry blossom front" as it slowly moves northward. Ryokan Asakusa SHIGETSU. Capsule hotels. Japan Travel and Living Guide. Discount Air Tickets for Japan. While regular airfares by conventional airlines remain relatively high on domestic routes, an increasing competition by discount airlines and a wide array of discount offers have made domestic air travel in Japan very attractive and competitive in recent years. 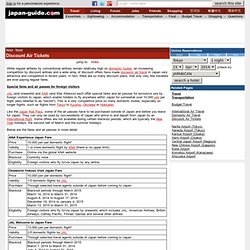 In fact, there are so many discount plans, that only very few travelers are ever paying regular fares. Special fares and air passes for foreign visitors JAL (and oneworld) and ANA (and Star Alliance) each offer special fares and air passes for exclusive use by foreign visitors to Japan, which enable holders to fly anywhere within Japan for somewhat over 10,000 yen per flight (also referred to as "sector").

This is a very competitive price on many domestic routes, especially on longer flights, such as flights from Tokyo to Kyushu, Okinawa or Hokkaido. Like the Japan Rail Pass, some of the air passes have to be purchased outside of Japan and before you leave for Japan. Baths of Kurokawa's enchanted forest. Kyushu was until quite recently somewhat overlooked as a tourist destination, a Cinderella to the more obvious attractions of the main island with its celebrated temples, castles and samurai towns. 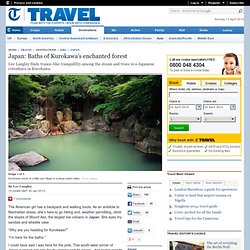 But people are beginning to travel farther afield: enthusiasts come here in search of the Imari and Arita pottery the area is famous for, while the more energetic strike out cross-country hiking, cycling and climbing. True hedonists head for the small villages where rotenburo, open-air, natural hot spring pools bubble from the volcanic earth, drawing visitors from all over Japan and increasingly from abroad. The geology that produces such dramatic beauty of landscape can from time to time show its destructive force, as we saw last year. But Kyushu lies at the southern end of the archipelago, far from those upheavals. Encouraged by the indomitable Japanese ability to rebuild their lives and welcome outsiders, foreigners are coming back. Time for my first hot spring bath. A surprise awaits me.