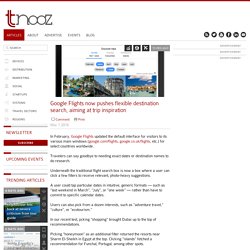 Travelers can say goodbye to needing exact dates or destination names to do research. Underneath the traditional flight search box is now a box where a user can click a few filters to receive relevant, photo-heavy suggestions. A user could tap particular dates in intuitive, generic formats — such as “last weekend in March”, “July”, or “one week” — rather than have to commit to specific calendar dates.

Users can also pick from a dozen interests, such as “adventure travel,” “culture”, or “ecotourism.” In our recent test, pcking “shopping” brought Dubai up to the top of recommendations. Picking “honeymoon” as an additional filter returned the resorts near Sharm El-Sheikh in Egypt at the top.

Google travel-general. Google buys online travel guide Ruba. Community site Ruba obviously has something different about it from the countless other travel guides on the web – demonstrated mainly by news that Google has just bought it. 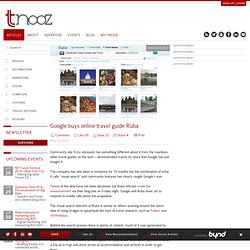 The company has only been in existence for 15 months but the combination of what it calls “visual search” and community features has clearly caught Google’s eye. Terms of the deal have not been disclosed, but Ruba officials made the announcement via their blog late on Friday night. Google and Ruba have yet to respond to media calls about the acquisition. The visual search element of Ruba is similar to others working around the same idea of using images to spearhead the start of travel research, such as Fodors and 101Holidays.

Behind the search process there is plenty of content, much of it user generated by what appears to be a reasonably active community. However this is where the acquisition becomes intriguing, especially when pondering how Google will integrate the site, if at all. The blog post says: Update 2: Another piece in the jigsaw - Google eyes tours and activities. Google is exploring how it might integrate attractions, tours and activities at a deeper level into search and other products, along similar lines to its push into hotels. 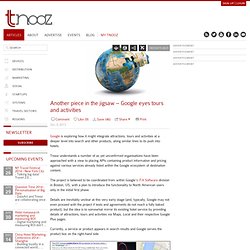 Tnooz understands a number of as yet unconfirmed organisations have been approached with a view to placing APIs containing product information and pricing against various services already listed within the Google ecosystem of destination content. The project is believed to be coordinated from within Google’s ITA Software division in Boston, US, with a plan to introduce the functionality to North American users only in the initial first phase. Details are inevitably unclear at this very early stage (and, typically, Google may not even proceed with the project if tests and agreements do not reach a fully baked product), but the idea is to somewhat mirror its existing hotel service by providing details of attractions, tours and activities via Maps, Local and their respective Google Plus pages.

Google wades into personal trip planning with Tour Builder. In an effort to enable people to share their stories (be it related to leisure travel, places visited while on military service etc), Google has launched a storytelling service by the name Tour Builder. 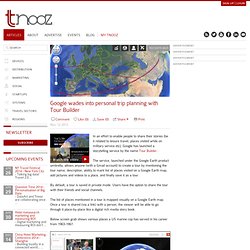 The service, launched under the Google Earth product umbrella, allows anyone (with a Gmail account) to create a tour by mentioning the tour name, description, ability to mark list of places visited on a Google Earth map, add pictures and videos to a place, and finally save it as a tour. By default, a tour is saved in private mode. Users have the option to share the tour with their friends and social channels. The list of places mentioned in a tour is mapped visually on a Google Earth map. Once a tour is shared (via a link) with a person, the viewer will be able to go through it place-by-place like a digital rich media story book.

Google Glass - the Next Big Thing in the travel industry? In 2012, Google announced plans to create what many considered to be the next and logical step for mobile devices – interactive glasses known as, err, Glass. 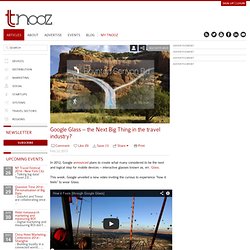 This week, Google unveiled a new video inviting the curious to experience “how it feels” to wear Glass. Now, the fundamental questions are: Will people REALLY wear this gadget? Behold, the center of the Googleverse: It's all coming together for Ye Olde Small Business. Google has been on a steady march towards complete digital domination, acquiring companies that allow Google to burrow itself into pretty much everything and carving out a lucrative and inescapable Googleverse. 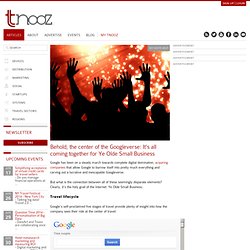 But what is the connection between all of these seemingly disparate elements? Clearly, it’s the holy grail of the Internet: Ye Olde Small Business. User generated photo tours added to Google Maps. Anything Microsoft can do, we can (try and) do better – at least that appears to be an unwritten motto at Google when it comes to some of the things it is trying. 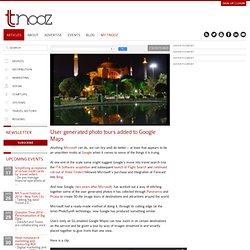 At one end of the scale some might suggest Google’s move into travel search (via the ITA Software acquisition and subsequent launch of Flight Search and continued roll-out of Hotel Finder) followed Microsoft’s purchase and integration of Farecast into Bing. And now Google, two years after Microsoft, has worked out a way of stitching together some of the user generated photos it has collected through Panoramio and Picasa to create 3D-lite image tours of destinations and attractions around the world.

Google quietly introduces social travel service Schemer. There are a number of pieces missing from the Google travel jigsaw. 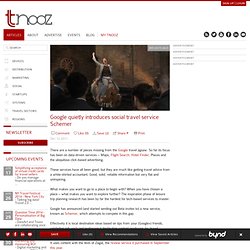 So far its focus has been on data-driven services – Maps, Flight Search, Hotel Finder, Places and the ubiquitous click-based advertising. These services have all been good, but they are much like getting travel advice from a white-shirted accountant. Good, solid, reliable information but very flat and uninspiring. Google-travel reviews.