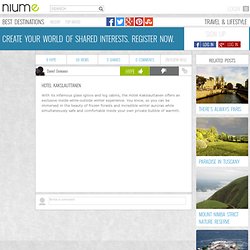 You know, so you can be immersed in the beauty of frozen forests and incredible winter auroras while simultaneously safe and comfortable inside your own private bubble of warmth. 18 Unique Hotels From Around the World. Some travelers think that the place where you lay your head on the road is just that - a place to sleep, or change clothes. 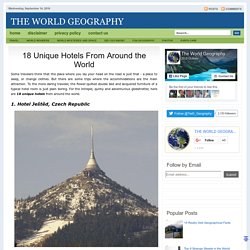 But there are some trips where the accommodations are the main attraction. To the more daring traveler, the flower-quilted double bed and lacquered furniture of a typical hotel room is just plain boring. For the intrepid, quirky and adventurous globetrotter, here are 18 unique hotels from around the world. 1. Hotel Ještěd, Czech Republic Czech architect Karel Hubáček is responsible for the retro-futuristic tower rising over 300 ft (91m) above majestic Ještěd mountain. The tower was designed to naturally extend the silhouette of the mountain it tops, but isn't merely decorative. Built between 1966 and 1973, the Ještěd Tower was awarded the Perret Prize, an honor bestowed by the International Union of Architects. The view is one of the most breathtaking in all of the Czech Republic, looking out over parts of Germany and Poland, and the majority of Bohemia. 2. 5. 6. Tours of a Lifetime. Andymack1966 : @LilacLounge How's this for ... 33 Unbelievable Places To Visit Before You Die. I Can’t Believe These Actually Exist On Earth…

So many other-worldly places exist right on our planet, and we never even knew about it. 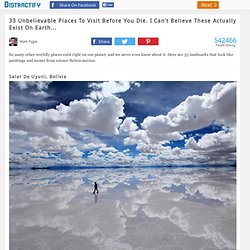 Here are 33 landmarks that look like paintings and scenes from science fiction movies. earthporm.com During the rainy season, the world’s largest salt flat becomes the world's largest mirror. The Salar was born when several prehistoric lakes joined into one. The salt flat is so reflective, it’s used to calibrate satellites. michaelyamashita.com These unqiuely tall and thin mountains are so alien that they were used in James Cameron’s “Avatar.” Niccolobonfadini.comniccolobonfadini.com These sentinels are actually giant trees covered in snow and ice. Apod.nasa.gov natureflip.com This 240-meter-long cave system has been one of Guilin, China’s most popular attractions for over 1200 years.

Amusingplanet.com all-that-is-interesting.com. 10 little gems on the UK coastline. Penmon Point, near Beaumaris, Anglesey Tucked away on the eastern tip of Anglesey, Penmon Point makes an ideal lunch stop as part of a coastal walk (the Isle of Anglesey Coastal Path runs through it). 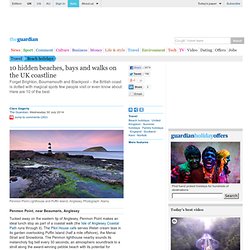 The Pilot House cafe serves Welsh cream teas in its garden overlooking Puffin Island (half a mile offshore), the Menai Strait and Snowdonia. The Penmon lighthouse nearby sounds its melancholy fog bell every 30 seconds, an atmospheric soundtrack to a stroll along the award-winning pebble beach with its potential for porpoise and seal spotting. A short walk down the toll road (free for pedestrians) leads to the 13th-century Penmon Priory and holy well dedicated to Saint Seiriol, and an Elizabethan dovecote, all ancient, arcane and architecturally interesting. • For a longer stay, check into the Old Coastguard House; sleeps six from £895 a week in summer. The Seat of Clan Mackenzie. Do look down! The world's best skywalks – in pictures. 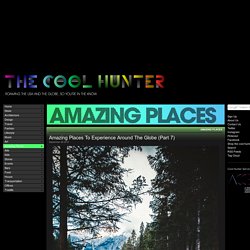