10 Most Magnificent Trees in the World. "A tree is a wonderful living organism which gives shelter, food, warmth and protection to all living things. 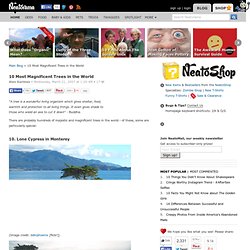 It even gives shade to those who wield an axe to cut it down" - Buddha. There are probably hundreds of majestic and magnificent trees in the world - of these, some are particularly special: 10. Lone Cypress in Monterey (Image credit: bdinphoenix [flickr]) (Image credit: mikemac29 [flickr]) Buffeted by the cold Pacific Ocean wind, the scraggly Lone Cypress [wiki] (Cupressus macrocarpa) in Pebble Beach, Monterey Peninsula, California, isn't a particularly large tree. 9. As a hobby, bean farmer Axel Erlandson [wiki] shaped trees - he pruned, bent, and grafted trees into fantastic shapes and called them "Circus Trees. 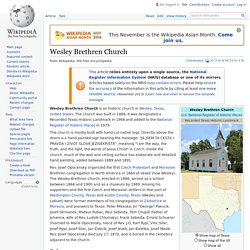 The church was built in 1866. It was designated a Recorded Texas Historic Landmark in 1966 and added to the National Register of Historic Places in 1979. The church is mostly built with hand cut native logs. Directly above the doors is a hand painted sign bearing the message: "JA JSEM TA CESTA I PRAVDA I ZIVOT SLOVA JEZISEKRISTA", meaning "I am the way, the truth, and the light, the words of Jesus Christ" in Czech. Inside the church, much of the wall and ceiling surface has elaborate and detailed hand painting, added between 1889 and 1891. References[edit] External links[edit] Couchsurfing Alternatives. Today’s post picks up and expands on some of the resources mentioned in Monday’s article, “How To Burst The Tourist Bubble“. The theory that almost everyone on Earth is connected to anyone else via a small number of acquaintances seems to hold true for backpackers, too. The rapid uptake and access to the world wide web has helped people become better acquainted with their world—and with one another.

The Truth About Travelers  We have been called many things. 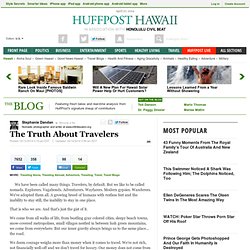 Travelers, by default. But we like to be called nomads. Explorers. Vagabonds. Adventurers. That is who we are. We come from all walks of life, from bustling gray colored cities, sleepy beach towns, snow-covered metropolises, small villages nestled in between lush green mountains, we come from everywhere. We deem courage weighs more than money when it comes to travel. We have learned to live in depth without comforts. The Best Way to Find a Cheap Airplane Ticket, According to Two Guys Who Set Fares. Travelers often bemoan the gambling in airline ticket-shopping: Do I buy now or wait to see if the fare decreases?

One reason for that casino feel is the computerized alchemy of what’s known as revenue management, the airlines’ 24/7 effort to improve their financial performance by meticulously allocating the number of seats at various price levels and overbooking flights. It’s an algorithm-based field of math and computer science that is, literally, akin to rocket science. A typical day’s operation for the average global airline involves roughly 100 million fares to be analyzed and managed, says Bill Brunger, chief executive of PODS Research, a revenue management consultancy and a former vice president of Continental Airlines (UAL). He and Scott Nason, a former vice president of revenue management at American Airlines, discussed the dark arts of airfare pricing on Tuesday at a conference hosted by Airlines for America, the U.S. carriers’ trade group in Washington.

Why you should travel young - Converge. As I write this, I’m flying. 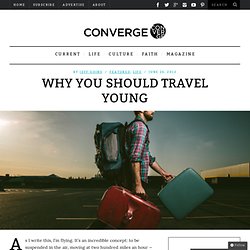 It’s an incredible concept: to be suspended in the air, moving at two hundred miles an hour — while I read a magazine. Amazing, isn’t it? I woke up at three a.m. this morning. Long before the sun rose, thirty people loaded up three conversion vans and drove two hours to the San Juan airport. Our trip was finished. As I sit, waiting for the flight attendant to bring my ginger ale, I’m left wondering why I travel at all. I was leading a missions trip in Puerto Rico. News Archive Search. Daily TV Ratings - canceled TV shows - TV Series Finale.