This Man Searched for the Yeti for 60 Years—and Found It. In 1951, a British explorer named Eric Shipton looking for an alternative route up Mt. 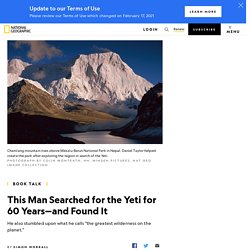 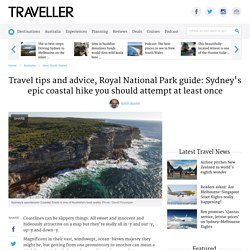 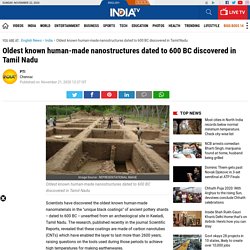 The research, published recently in the journal Scientific Reports, revealed that these coatings are made of carbon nanotubes (CNTs) which have enabled the layer to last more than 2600 years, raising questions on the tools used during those periods to achieve high temperatures for making earthenwares. According to the scientists, including those from Vellore Institute of Technology (VIT) in Tamil Nadu, the coatings are "the oldest nanostructures observed till now. " "Until this discovery, to our knowledge, the most ancient known nanostructures in human-made artifacts are from the eighth or ninth century AD," study co-author Vijayanand Chandrasekaran from VIT told PTI. The hunter within: Indigenous food gathering secrets revealed. October 9, 2020October 9, 20205 minute read It’s an ebb tide. 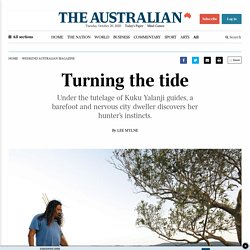 Low clouds are scattered across a grey sky and shroud the mountains that rise from the sea to shape the coastline. My fingers are curled around a bamboo spear and I’m about to find out if I’ve got what it takes to be a hunter. Wet sand squelches through my bare toes and the salty air braces me for the task ahead. On Cooya Beach, just 10 minutes’ drive north of the restaurants and boutiques of Port Douglas in the Cairns and Great Barrier Reef region, I gaze across an expanse of rippled sand and shallow puddles left by the receding Coral Sea. Best places to road trip in Australia. With international travel off the cards for the time being, many of us are embracing the local road trip to scratch the holiday itch. 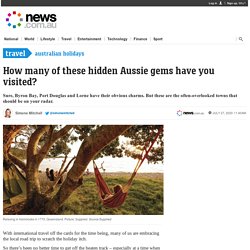 10 best UTV quad bikes on the market. The Honda Pioneer 500, is a compact, light, two-seat side-by-side with a 475cc single-cylinder engine and a semi-auto transmission, operated by nifty little paddle shifters on the steering wheel. 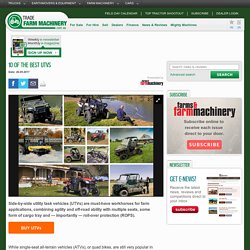 Honda has obviously gone to some trouble to keep this thing as compact as possible without making it too small for the average human being to get in and drive. There isn’t a huge amount of space in the cab, though, and not a lot of storage space either. World Map: The Literal Translation of Country Names. Hahndorf travel guide: Picturesque town steeped in history. 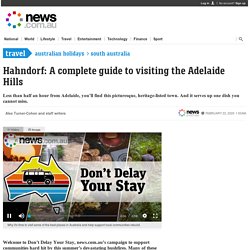 Many of these regions rely on tourism so one of the best ways to help is to visit and spend time in some of the most beautiful parts of our great country. An easy 30-minute drive across the hills from Adelaide and you can be in the town of Hahndorf. The main street is packed with shops, restaurants and cafes so you’ll need some time here. There is literally a butcher, a baker and candle maker in this town. It’s where you will find Udder Delights, selling locally made cows and goats cheese, Brayfield Park Lavender shop and Buzz Honey. Swiss Travel Pass: Switzerland train ride will ruin your daily commute. A small mountainous country in the heart of Europe, Switzerland is usually associated with chocolate, banking, knives and watches. 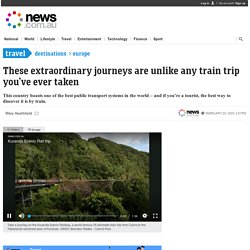 This is a place for the organised, the efficient, and the finer things in life. Yet when I arrive, it’s something entirely different that strikes me. From the fertile valleys of the north across the Alps to the Mediterranean south, the spectacular scenery really is something special. And there’s no better way to explore than by rail. Imagine sitting back with a glass of wine, informative commentary on the headset and uninterrupted views as you glide through villages and valleys over mountain passes and blue lakes. Best street food to eat in Phuket, Thailand. It’s well known that Aussies just can’t get enough of Phuket. 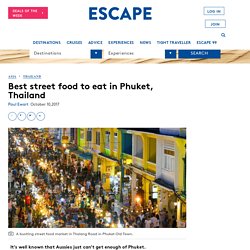 For decades, the largest of Thailand’s islands has been a travellers’ go-to thanks to its tropical climate, blissful beaches and raucous bar scene. But perhaps unknown to most is the island’s status as an international culinary heavy-hitter. Placed within the lauded ranks of UNESCO’s World’s Leading Cities of Gastronomy in 2011, four years later Phuket was upgraded to City of Gastronomy status due to its unique food scene. 4 Islands To Visit In Greece Other Than Mykonos And Santorini - GQ. No Cookies. To use this website, cookies must be enabled in your browser. 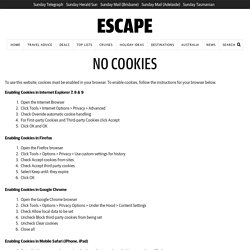 Top 10 trending destinations for 2019 - 9Travel. NASA is looking at how to contain a volcano that may wipe out humanity. What images go through your mind when you think of the end of the world? Asteroids? Perhaps a world war? Climate change? 20 Unusual Dining Locations Around the World - Buzz N Fun. The whole idea behind dining at a fancy restaurant is for you to enjoy a sumptuous meal, where staff waits on you and serves you. Practically, you get to just lay back and hey presto, food appears as though miraculously summoned. And – other than not having to raise a single finger in order to prepare said sumptuous meal – the fantastic thing about this is that there are no dishes to wash later. It’s no wonder that women are so keen about dinner dates. Here are 20 restaurants which really know how big a part the restaurant location and overall ambience play in the dining experience.

Real UFO With Aliens Caught on Camera. Isla Holbox: Mexico's tropical island paradise that's a well-guarded secret. If there's one way to enforce relaxation during a holiday, it's to break your ankle two weeks before departure. Japan holidays: Discover Asia’s most underrated beaches. WITH a trip to the Land of the Rising Sun more renowned for the hustle and bustle of Tokyo, the deep powder of Hokkaido, or the shrines and temples of Kyoto and Nara; you would be forgiven for overlooking Japan as a potential beach holiday destination. Georgia Hopkins Looking for a warm getaway during the Australian winter? No Cookies. Aussie beaches can’t compete with this. The beach at Zlatni rat (Golden Horn or Golden Cape), Bol, Brac island, Dalmatia. This island is now cheaper than ever. Shangri La's Hambantota Resort in Sri Lanka. Explore the magical ancient city uncovered beneath a Turkish city.

Montville, QLD, has the best accommodation in Australia: Trivago. Conflict Islands, PNG: P&O cruises to sail to ‘rare, untouched marvel’ Is Jervis Bay Australia’s most underrated paradise? Noah's Ark Found: Why Keep Us In The Dark? 11 places to see before it’s too late. The Philippines is a paradise home to more than 7000 islands. Drippler - Make Your Smartphone Awesome. China’s best-kept secrets unlocked.