Just how valuable are online reviews? - Tnooz. The influence of online reviews for hotels and other tourism businesses on the purchase decision has been accepted for some time. 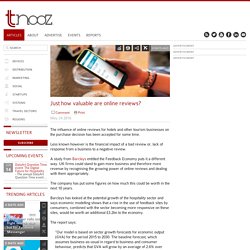 Less known however is the financial impact of a bad review or, lack of response from a business to a negative review. A study from Barclays entitled the Feedback Economy puts it a different way. UK firms could stand to gain more business and therefore more revenue by recognising the growing power of online reviews and dealing with them appropriately. The company has put some figures on how much this could be worth in the next 10 years. Barclays has looked at the potential growth of the hospitality sector and says economic modelling shows that a rise in the use of feedback sites by consumers, combined with the sector becoming more responsive on these sites, would be worth an additional £3.2bn to the economy. The report says: “Our model is based on sector growth forecasts for economic output (GVA) for the period 2015 to 2030.

Key consumer highlights include: Airlines, brace yourselves for a new dimension of inflight entertainment. Who remembers the Virgin Atlantic passenger who wrote a lengthy letter complaining about his inflight meal, which went viral via email? Now, it seems passengers who don’t want publicise any issues to the rest of the plane, can provide feedback via a real-time onboard system. Inflight entertainment specialist Thales has got together with Survey Analytics to enable airlines to collect data from passengers.

It could spell disaster as well as perhaps some peculiar survey results in the months to come although presumably passengers will guided to provide relevant and meaningful feedback via the surveys. According to a statement, a major airline will have the platform by the end of 2013 and will enable passengers to get involved in surveys via their seat-back systems. Survey Analytics says the partnership enables airlines to listen to and act on feedback immediately as well as making it easier to engage with passengers and improve the overall experience.

NB: Survey image via Shutterstock. Time to think beyond dedicated review sites like TripAdvisor. Most marketers think visiting customer review sites is part of the “research phase” of the buying cycle. 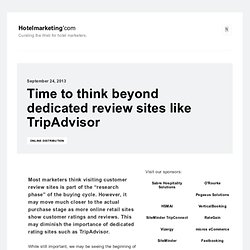 However, it may move much closer to the actual purchase stage as more online retail sites show customer ratings and reviews. This may diminish the importance of dedicated rating sites such as TripAdvisor. While still important, we may be seeing the beginning of a change in the importance of dedicated customer review sites, according to a new report by Maritz Research. Naked truth about online hotel reviews [INFOGRAPHIC] How many user reviews does the average hotel have against its name these days? 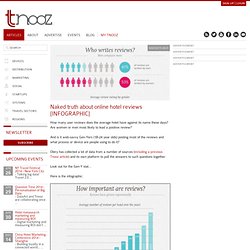 Are women or men most likely to lead a positive review? And is it web-savvy Gen-Yers (18-24 year olds) posting most of the reviews and what process or device are people using to do it? Olery has collected a lot of data from a number of sources (including a previous Tnooz article) and its own platform to pull the answers to such questions together. Look out for the Gen-Y stat… Expedia appoints Feefo for pan-European customer reviews.

Following a trial which saw customer reviews on Expedia increase by more than 4000% in just 14 days, the world's largest online travel company has appointed Feefo to generate reviews for them from their customers’ experiences with their Expedia.co.uk, Expedia.fr, Expedia.de and Expedia.nl sites. 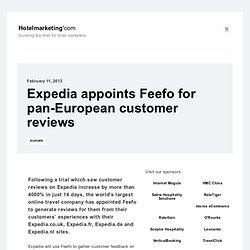 Expedia will use Feefo to gather customer feedback on the service they receive from the various European websites. Airbnb as an easy target? Curious tale of disappearing negative review. If you are Airbnb, Expedia, TripAdvisor and Groupon — big names in travel tech — you are going to have to take your lumps sometimes because your brand is exposed in a major way and consumers and blogger/journalists love to take their shots at the big guys or girls. 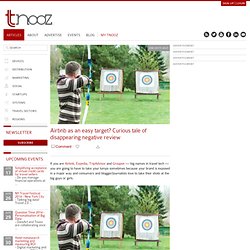 A recent case about the removal of an Airbnb guest’s negative review of a stay at an apartment in Lisbon, Portugal, says much about the social media challenges of being a big-time brand, user-generated content, the peer-to-peer rental market, and the state of the blogosphere and journalism. Angela Rhodes, a travel writer, blogger and photographer, wrote a post in her Perpetual Travels blog a couple of months ago complaining that Airbnb removed a negative review she had written about her month-long stay with her husband at this apartment. “… This meant that most days were very, very noisy.

The host promised this work would be over in a week, but it continued throughout our entire stay,” the review said.

Trust in reviews. Hotel reviews. The power of just ONE user review for travel companies. NB: This is a guest article by Anthony Rawlins, CEO of Digital Visitor, a social media and marketing agency for travel and tourism organisations. 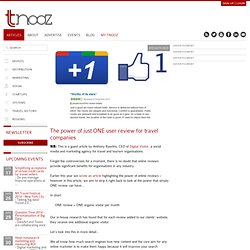 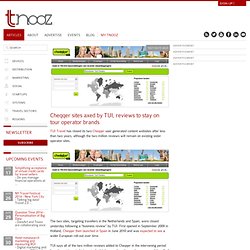 The two sites, targeting travellers in the Netherlands and Spain, were closed yesterday following a “business review” by TUI. First opened in September 2009 in Holland, Cheqqer then launched in Spain in June 2010 and was expected to see a wider European roll-out over time.