Tuning into the needs of the Indigo Children 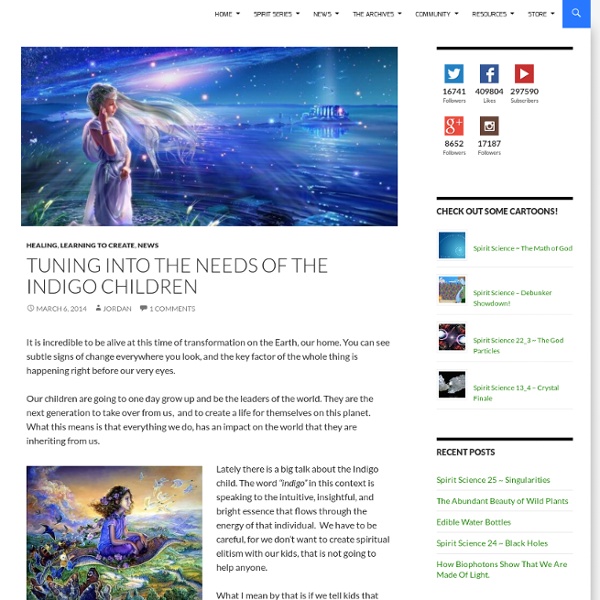 It is incredible to be alive at this time of transformation on the Earth, our home. You can see subtle signs of change everywhere you look, and the key factor of the whole thing is happening right before our very eyes. Our children are going to one day grow up and be the leaders of the world. They are the next generation to take over from us, and to create a life for themselves on this planet. What this means is that everything we do, has an impact on the world that they are inheriting from us. Lately there is a big talk about the Indigo child. What I mean by that is if we tell kids that some people are special and some kids are not, then they are going to grow up with a pre-written program that tells them that they are better than someone else. Everyone is God, and in a way, everyone is an indigo. It’s also related to the natural evolution of our human consciousness, and the quickening of the mental processors and ability to communicate ideas. How to Nurture and Support an Indigo Child

Four Powers of Maya EACH of the four Yugas, as described by the ancient Hindu sages, has a correspondence with one of the four powers of Maya, the darkness of Illusion that hides from man his Divine nature. Each Yuga brings to mankind in general an opportunity to control and understand one of these universal powers. The four Illusions, Abidyas, of Maya, counting from the grossest to the most subtle, are: This four-fold aspect of Maya is mentioned in the bible in the following passage (Rev. 4:6): "And in the midst of the throne and round about the throne, were four beasts full of eyes before and behind." In Kali Yuga, the knowledge and power of man is confined to the world of gross matter (Bhu Loka, first sphere,) and his state or natural caste is Sudra, a menial or dependent of Nature. In Dwapara Yuga, man gains a comprehension of the electrical attributes, the finer forces and more subtle matters of creation. The five kinds of electricities manifest in three ways through the three Gunas—

Virtual Reality Shifts are a Doorway into Fifth-Dimensional Timelines It is possible at any time to visualize and begin aligning with the version of your reality that allows you to exist along fifth-dimensional timelines. As you gradually shift to higher-vibrational realities, struggle falls away from you; your response to the realities you encounter becomes one of acceptance and gratitude because you are able to see the blessings and higher order contained within every situation. From this perspective, there is never a reason to allow yourself to be pulled into negative energies because love-filled alternatives exist adjacent to every moment and can be accessed in the blink of an eye. Each time we choose love over lower alternatives, we activate new timelines and potentials that hold the power to carry us seamlessly into fifth-dimensional life tracks. In fact, it is possible to go a step further and incubate an entire fifth-dimensional life track and begin the process of shifting to this new reality thread. Creating the World of your Highest Visions

SBaGen -- Binaural Beat Brain Wave Experimenter's Lab Intro | Mailing lists | Downloads | FAQ | TODO Intro Welcome to the world of Binaural Beats! The theory behind binaural beats is that if you apply slightly different frequency sine waves to each ear, a beating affect is created in the brain itself, due to the brain's internal wiring. Here is a table from Calleman on how brain-wave frequencies relate to Earth layer boundary resonant frequencies: It is also possible to produce mixtures of brain waves of different frequencies by mixing binaural tones, and in this way, with practice and experimentation, it is reportedly possible to achieve rather unusual states, such as out-of-body stuff, and more. I should add that I have only read about the more advanced and unusual uses (OOBEs and so on). So, SBAGEN is my utility, released as free software (under the GNU General Public Licence) for Linux, Windows, DOS and Mac OS X, that generates binaural tones in real-time according to a 24-hour programmed sequence read from a file. Downloads Community More:

Aurélien Pumayana Floret - Sacred Visual Alchemist Astral 101: Breakdown of Everything & Using the Third Eye Hello my Astralnauts! It’s been a very long time. Many times have a tried to write an apology for my absence, but I’ve realized that I’ve had to come to this point in my life so that I could continue to do the best I can to provide you with knowledge. I do hope you can forgive me. This is my final article of the Astral 101 series, I’ll hopefully be starting another article series after this, if Jordan decides that is okay. If not I may start a YouTube series (or both who knows). Today, we are going to revisit everything that we’ve gone through and make sure there is a clear understanding of all the concepts presented. Dimensions A dimension refers to a specific frequency of vibration in reality. Astral 101 has mainly focused on the fourth dimension, or the astral plane, which is hard to describe while on the third dimension, as it is beyond our 3D comprehension. Meditation grounding (connecting with the earth and stabilizing the self), Higherselves limitation. Inner Sanctuary Lucid Dreaming

The Mysterious Connection Between Sirius and Human History Since ancient times and across multiple civilizations, Sirius, the dog star, has been surrounded with a mysterious lore. Esoteric teachings of all ages have invariably attributed to Sirius a special status and the star’s importance in occult symbolism is an attestation of that fact. What makes Sirius so special? Is it simply due to the fact that it is the brightest star in the sky? Or is it also because humanity has an ancient, mysterious connection with it? This article looks at the importance of Sirius throughout History and secret societies and will describe the symbolism surrounding it. Sirius is located in the constellation Canis Major – also known as the Big Dog – and is therefore known as the “dog star”. Artifacts of ancient civilizations have revealed that Sirius was of a great importance in astronomy, mythology and occultism. In Ancient Civilizations In Ancient Egypt, Sirius was regarded as the most important star in the sky. Star alignment with the Great Pyramid of Giza.

Home Remedies undefined This website was created so you can freely use what others have learned about home remedies that work. The choice is always yours as to whether you will use them or not. I believe God gave us leaves, trees, herbs, and spices that will cure all diseases. I do not get any compensation for any click-on links or products mentioned. They are placed here only for your convenience. When the body has too high an acidic pH level, diseases can form more easily. Drink 4 cups of green tea each day to keep your body alkaline in its pH levels. At night, about an hour before going to bed, mix 2 tsp. honey in a cup of hot water, and stir in 2 tsp. apple cider vinegar. Eat watermelon, lemon, limes, asparagus, or cucumbers often. Drink coconut water four times each day to make the body more alkaline in its pH levels. Mix Bentonite Clay powder with some water to make a paste, and dab it on the acne. Use Apple Cider Vinegar as a facial toner. Add pure cold-pressed sesame oil to your daily diet.

Spiritual & Healing Practices Home Go to Astrology The Cell Salts - Astrological Tonics by Gretchen Lawlor Editor's Note from Pat Lantz: This article by Gretchen Lawlor has for several years been consistently one of the most read articles on ATH. So, if you've somehow missed I've brought it back to the top for your enjoyment. Homeopathy and astrology have colluded to provide an extraordinary series of astrological tonics, one particularly suited to each of the 12 signs, Aries through Pisces. KALI PHOS. NAT SULPH. KALI MUR. CALC FLUOR . Cancer rules the stomach, breasts, body fluids and mucus membranes. MAG PHOS (Magnesium phosphate) is the cell salt for Leo. In naturopathic medicine, the cell salt Mag phos has a long-standing tradition of use in situations involving cramp, convulsions, spasms or paralysis. KALI SULPH. As we age, our decreasing ability to effectively use what we eat shows up in dryness of the skin and hair. NAT PHOS. CALC SULPH. SILICA is the cell salt for those born under the sign of Sagittarius.

NeuroSky Mindwave Mobile - SEN-12805 Description: This is the Mindwave Mobile from NeuroSky, an EEG headset that safely measures and transfers the power spectrum (alpha waves, beta waves, etc) data via Bluetooth to wirelessly communicate with your computer, iOS, or Android device. This headset can be simply slipped on to be able to see your brainwaves change in real time. With the Mindwave Mobile you can monitor your levels of attention and relaxation and even learn about how your brain responds to your favorite music. The Mindwave Mobile is surprisingly simple consisting only of a headset, an ear-clip, and a sensor arm. What’s really great about the Mindwave is the more than 100 brain training games, educational apps, and development tools available through the NeuroSky, iOS, and Android stores. Features: Uses TGAM1 Bluetooth v2.1 Class 2 Module (10 Meter Range)Automatic Wireless PairingSingle AAA Battery Powered (Battery Not Included)8-hour Battery Run TimeStatic Headset IDiOS and Android SupportStarter Kit Edition