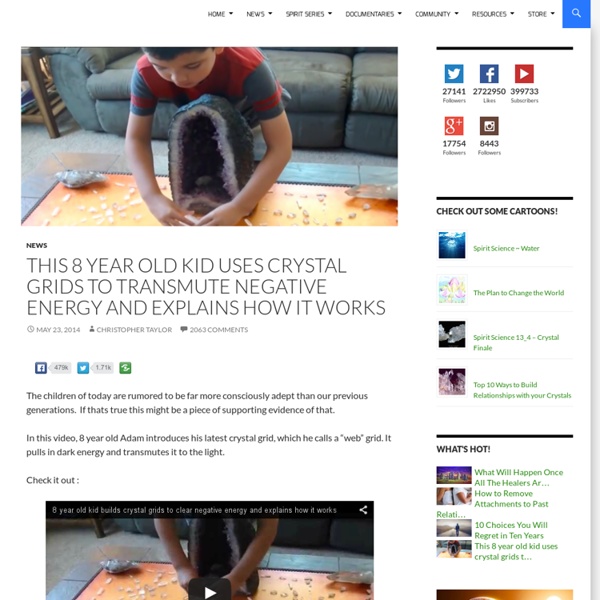 The children of today are rumored to be far more consciously adept than our previous generations. If thats true this might be a piece of supporting evidence of that. In this video, 8 year old Adam introduces his latest crystal grid, which he calls a “web” grid. Check it out : It took Adam about 10 minutes to build this grid which is full of various crystals – Amethyst, Apophyllite, Celestial Smoky Quartz, Clear Quartz points, Vogels, and several Lemurian Seed Crystals. Adam didn’t pull the pattern of the grid out of a book or research it on the internet. Related:  para psyc

The Effects Of Negative Emotions On Our Health Joe Martino, Collective Evolution, Guest | Humans experience an array of emotions, anything from happiness, to sadness to extreme joy and depression. Each one of these emotions creates a different feeling within the body. After all, our body releases different chemicals when we experience various things that make us happy and each chemical works to create a different environment within the body. For example if your brain releases serotonin, dopamine or oxytocin, you will feel good and happy. Convexly, if your body releases cortisol while you are stressed, you will have an entirely different feeling associated more with the body kicking into survival mode. What about when we are thinking negative thoughts all the time? Positive vs. Is there duality in our world? Cut The Perceptions As Much As Possible After thinking about it for a moment you might realize that there are in fact no positive or negative experiences other than what we define as such. Mind Body Connection You Have The Power

Scientists Discover People Who Are Awake Can Influence Dreams Of Sleeping People Using Telepathy Dream telepathy suggests that human beings have the ability to communicate telepathically with another person while they are dreaming. This isn’t a new concept, scientific interest in telepathy dates back to the fathers of the psychoanalytic movement. Freud, for example, looked at the implications of telepathy on psychoanalytic thought. It seems that all great minds encourage the study of various types of non-physical phenomena. “The day science begins to study non-physical phenomena, it will make more progress in one decade than in all the previous centuries of its existence.” – Nikola Tesla According to Stanley Krippner, Ph.D. and professor of psychology at Saybrook University in California: A wealth of anecdotal and clinical material exist which supports the possibility of telepathic effects occurring in dreams (Krippner, 1974). Experiments and Results The experiments they conducted lasted a span of more than 10 years, and “yielded statistically significant results.” 1. 2. 3. 4. 5.

ORMUS FAQ by Barry Carter Questions Question: How can I get some of the monoatomic White Powder Gold? Answer: It has not been conclusively demonstrated whether the strange materials David Hudson identified are monatomic or not. Since we do not wish to prejudice the scientific process we have decided not to call them monatomic unless this issue is resolved. paranorm.htm#diatomic Apparently, David Hudson used the term "White Powder Gold" as a generic term for all of the precious metal elements in their m-state form. never made very much of the white powder of gold because his ore source had relatively little m-gold in it. David Hudson's colleague who did the 41 day fast was using a powder composed of several m-state elements with less than 1% of the powder being white gold. It is possible to purchase m-state gold in a relatively pure form as a wet precipitate. The easiest way to get m-state gold is to use the Wet Method on salt as the resulting precipitate is claimed to be 70% m-gold and 30% magnesium.

7 Ways to Better Listen to Your Intuition Elizabeth Renter, naturalsociety.com | Have you ever been in a situation where your “gut feeling” told you one thing, but your rational mind said another? If you went with your brain rather than your intuition, there’s a good chance you ended up regretting your decision. Your intuition is the subconscious leader that many people fail to give proper respect to. But learning to listen to this internal compass could help you make better decisions and live a more fulfilling life. “I define intuition as the subtle knowing without ever having any idea why you know it,” explains Sophy Burnham, bestselling author of The Art of Intuition, to The Huffington Post. It’s unconscious reasoning, the guidance that compels you to turn left when all signs may be pointing right. Intuition is commonly associated with New Age mysticism or a metaphysical way of thinking, but it doesn’t have to be so. The good news is that your intuition is still there, you merely have to learn to hear it again. 1. 2. 3. 4.

This Is Why You Need To Massage Your Feet Every Night Before Bed Massage therapy is one of the greatest tools in the medical handbook. Putting pressure on the body can relieve tension in numerous ways. One of those ways is through what’s called reflexology. Massaging your feet in different places is linked to better health in different parts of the organs. Massaging your feet also helps improve blood circulation, relieves numerous disease, helps maintain proper balance, has proven beneficial for restless leg syndrome, improves your sleep, reduces the effect of edema during pregnancy, and is great for your skin. Massaging the big toe is good for your lungs and brain. Credits: Higherperspectives

Archeology & Applied Remote Viewing :: Stephan A Schwartz The Caravel Project: The Location, Description, and Reconstruction of Marine Sites Through Remote Viewing – Download the full article PDF The Columbus Caravels Project is a multi-phase research program designed to locate and excavate from St. Ann’s Bay, Jamaica the remains of Columbus’ last two ships, Capitana and Santiago de Palos. After an enforced exile of a year and five days, Columbus and his marooned crew were finally rescued on 29 June 1504. They departed for Hispaniola and Spain, leaving behind two of the oldest recorded shipwrecks in the Western Hemisphere, and the earliest European site in Jamaica. The Caravel Project was organized in 1982 by the Institute for Nautical Archaeology (INA) in conjunction with the Institute of Jamaica.

38 Awesome Crystals for Spiritual Growth Crystals have always been rather appealing to me. There is something special about what they are, what they represent. They are more concentrated than regular rocks, they have more crystalline geometric patterns in their atomic structure than the cells in the human body do (sure, it may not be as fluid and moving, but that’s yin and yang for you) On my journey, I came across an old dusty book about crystals with a little piece of paper slipped inside. It was old and tattery, and hardly readable. This is an X-Ray of the Atomic Structure of a Beryl Crystal Crystals operate much like a magnet, but think about it in relationship to energy beyond the 3rd dimension. You see waves, pushing and pulling on the energy all around it. All of the vibrations of these crystals are important, and sometimes the crystal you think you need the least, is the one you need the most To learn more about Crystals, check out this short movie we put together all about them Article Source

Do You Fear Death? This Video From Alan Watts Will Help You Overcome It The fear of death is nothing new. While many philosophies and religions try to prepare us for it, to teach us how to embrace and see beyond it, fathoming life as we know it coming to an end can be a difficult mental undertaking. There are so many questions and feelings involved, from how it will happen to where we will go, that it’s enough to make you want to turn off your mind and forget about it altogether. But this video from Alan Watts, a British-born American philosopher, writer, and speaker who is best known for implementing an Eastern mindset into the Western world, will change the way you view death. “Who said you’re supposed to survive?” He also brings up the point that, even if our death could be delayed, we wouldn’t go on doing this, because we would come to realize that after a given amount of time, we didn’t even actually want that. His thoughts on children are also interesting. He concludes the video with an astute point that takes the power out of the death.