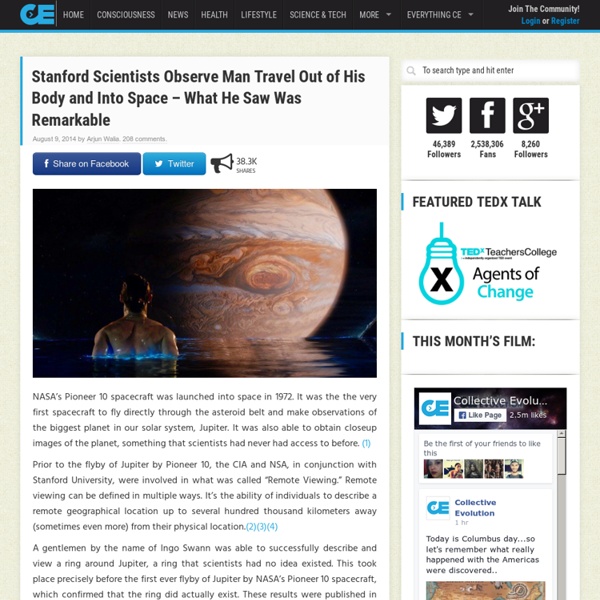 NASA’s Pioneer 10 spacecraft was launched into space in 1972. It was the the very first spacecraft to fly directly through the asteroid belt and make observations of the biggest planet in our solar system, Jupiter. It was also able to obtain closeup images of the planet, something that scientists had never had access to before. (1) Prior to the flyby of Jupiter by Pioneer 10, the CIA and NSA, in conjunction with Stanford University, were involved in what was called “Remote Viewing.” Remote viewing can be defined in multiple ways. It’s the ability of individuals to describe a remote geographical location up to several hundred thousand kilometers away (sometimes even more) from their physical location.(2)(3)(4) A gentlemen by the name of Ingo Swann was able to successfully describe and view a ring around Jupiter, a ring that scientists had no idea existed. It’s remarkable to think about these extended human capacities, and what we are capable of. The Above Information Was Documented. (1)

10 Life Hacks to Help You Cut Plastic Out of the Picture By Kate Good / onegreenplanet.org Plastic is so ubiquitous that it can be found in or associated with nearly every tangible item in existence. Just think about how many different things you used today that either were plasticor came packaged in plastic, you’re guaranteed to come up with at least five.

100 Diagrams That Changed the World by Maria Popova A visual history of human sensemaking, from cave paintings to the world wide web. Since the dawn of recorded history, we’ve been using visual depictions to map the Earth, order the heavens, make sense of time, dissect the human body, organize the natural world, perform music, and even concretize abstract concepts like consciousness and love. 100 Diagrams That Changed the World (public library) by investigative journalist and documentarian Scott Christianson chronicles the history of our evolving understanding of the world through humanity’s most groundbreaking sketches, illustrations, and drawings, ranging from cave paintings to The Rosetta Stone to Moses Harris’s color wheel to Tim Berners-Lee’s flowchart for a “mesh” information management system, the original blueprint for the world wide web.

What you need to know about artificial intelligence, and the imminent robot future Do androids dream of electric sheep? That's unclear, but I know for sure that every kid dreams of intelligent, thinking robots -- certainly every kid who goes on to work at CNET, in any case. Today, my sci-fi-fuelled childhood fantasies of a bot with a "brain the size of a planet" are closer than ever to being realised. Artificial intelligence, or AI, the practice of making a machine behave in a smart way, is already changing our world and is, by my reckoning, the most fascinating field of technology right now. But, as one professor I spoke to for this story put it, the "audacity of the attempt to build an intelligent machine" comes with a responsibility to know what we're meddling with.

Stephen Hawking says Higgs boson has potential to destroy entire universe Scientists believe they now have enough evidence to confirm the existence of the so-called 'God Particle'. Josh Dugan and Tyrone Roberts both found themselves in the sin bin after a huge all-in brawl broke out during the Knights' final round clash with the Dragons at Hunter Stadium. All the news you need to know. Harvard Unveils MRI Study Proving Meditation Literally Rebuilds The Brain’s Gray Matter In 8 Weeks Test subjects taking part in an 8-week program of mindfulness meditation showed results that astonished even the most experienced neuroscientists at Harvard University. The study was led by a Harvard-affiliated team of researchers based at Massachusetts General Hospital, and the team’s MRI scans documented for the very first time in medical history how meditation produced massive changes inside the brain’s gray matter. “Although the practice of meditation is associated with a sense of peacefulness and physical relaxation, practitioners have long claimed that meditation also provides cognitive and psychological benefits that persist throughout the day,” says study senior author Sara Lazar of the MGH Psychiatric Neuroimaging Research Program and a Harvard Medical School instructor in psychology. “This study demonstrates that changes in brain structure may underlie some of these reported improvements and that people are not just feeling better because they are spending time relaxing.”

Plants Have Memories: The Spiritual Case Against Agricultural Manipulation The Lakota of North America have many stories about seeds and how to know when each plant is in its sacredness. One seed flowers during a spiritual window called the Timpsila Ttkahca Wi, or when the Moon of Timpsila (turnip) is ripe. If you were to prematurely dig for the plant, it will not grow into a full nutrient. If you're too late in collecting the flower top, it breaks aboveground, and fierce winds blow the top away, leaving no trace where the underground root is located. make your own infographics Infographics (or Information Graphics) are graphic visual representations of data or information, presented in a way to make it easier to consume information. Infographics gained popularity in the mid-2000′s with the advent of sites like Digg and Reddit, and have quickly become one of the most popular methods to display researched data. There are three main types of infographics – where data is presented in a timeline, where statistical data is presented in graphs or with icons, or where data is presented on a map.

Robots master skills with ‘deep learning’ technique Robot learns to use hammer. What could go wrong? (credit: UC Berkeley) UC Berkeley researchers have developed new algorithms that enable robots to learn motor tasks by trial and error, using a process that more closely approximates the way humans learn. They demonstrated their technique, a type of reinforcement learning, by having a robot complete various tasks — putting a clothes hanger on a rack, assembling a toy plane, screwing a cap on a water bottle, and more — without pre-programmed details about its surroundings.

Future Collision Andromeda Planet-sized computers dominate the Local Group of galaxies; humanity's descendants are a Type 3 civilisation on the Kardashev scale Purely biological (non-cyborg) humans are exceedingly rare now. The very few which do remain comprise only a tiny fraction of the total sentient minds in existence. Though free to come and go as they please, they have practically zero influence in any governmental systems on Earth or elsewhere, being regarded as wholly subordinate to AIs and other entities. Top Ten Tips For Lucid Dreaming By Steven Bancarz| Lucid dreaming is one of the most extraordinary experiences you could have as a human being. Being awake within a dream, you are able to consciously interact with it just as you interact in the real world. Everything is saturated with colour and vibrantly alive, and it feels far more real than waking life does. There are many practical benefits to lucid dreaming. For me personally, it reminded be of how much life is like a dream and helped me appreciate the impermanence.

7 ways for Modern Society to Reconnect with Nature I got a question recently which I spent a while pondering, and now am striving to try and put into words this idea that i’m having about the way that modern society and nature interact with each other. The question went something like – “If the Flower of Life is everything, then is stuff like traffic jams and office cubicles a representation of the Flower of Life too?” So far, the short answer that I have for that is “Yes and No”. There are parts of that which is true. At a very large fractal of our energetic field, as well as a very tiny fractal, all of the geometries at some point are connected with the Flower of Life pattern that we all know so well. What occurs to me however, is that around a certain point of that fractal, from the atoms to the molecules to the cells in your skin all the way to the clothes that you’re wearing, those geometric fundamentals break down in favor of man-made structures that are more removed from that original geometry.