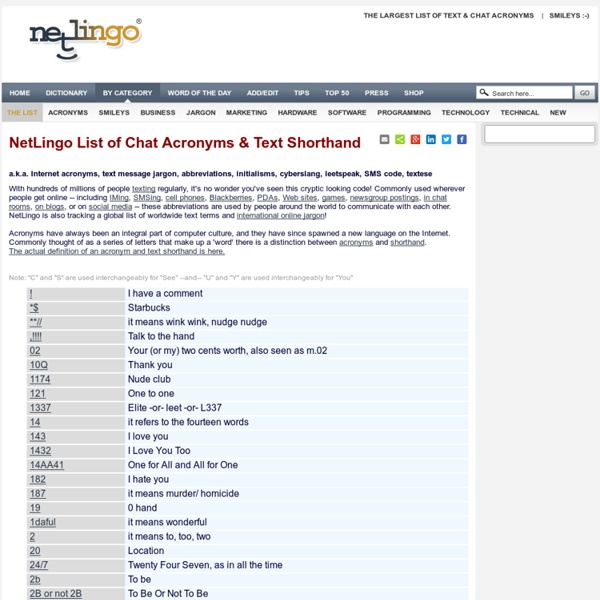 Text Messaging/Chat Abbreviations Updated April 28, 2016 / Posted March 01, 2004 By Vangie Beal This chat guide lists more than 1,450 text message and online chat abbreviations to help you translate today's texting lingo. With the popularity and rise in online text-based communications, such as Facebook, Twitter, instant messaging, email, Internet and online gaming services, chat rooms, discussion boards and mobile phone text messaging (SMS), came the emergence of a new texting language, tailored to the immediacy and compactness of these new communication media. While it does seem incredible that there are thousands of text abbreviations, keep in mind that different chat abbreviations are used by different groups of people. For example, online gamers are likely to use chat abbreviations not used by a financial blogger.

Finding the natural number of topics for Latent Dirichlet Allocation - Christopher Grainger Update (July 13, 2014): I’ve been informed that I should be looking at hierarchical topic models (see Blei’s papers here and here). Thanks to Reddit users /u/GratefulTony and /u/EdwardRaff for bringing this to my attention. However, Redditor /u/NOTWorthless says HDPs do not provide a ‘posterior on the correct number of topics in any meaningful sense’. I’ll do more research and do a follow-up post. You can follow the conversation on Reddit here. Introduction

Supper Supper is a name for the evening meal in some dialects of English. While often used interchangeably with "dinner" today, supper was traditionally a separate meal. "Dinner" traditionally had been used to refer to the main and most formal meal of the day, which, from the Middle Ages until the 18th century, was most often the midday meal. When the evening meal became the main meal, it was referred to as "dinner", and the lighter midday meal was called "luncheon".[citation needed] Etymology[edit]

This Robotic Arm Can Do Many Things, But Is Unable To Think For Itself — a combinatorics problem by Calvin Lin At a warehouse, robotic arms are responsible for retrieving boxes when an order is received from a customer. In one area of the warehouse, there is a stack of 6 boxes. Each box is a cube, and all the boxes have different sizes. Text Chat Emotions Main » Quick Reference » Posted May 21, 2009 Use a Smiley Face to Show Emotion in Text Messages and Online Chat A smiley face (also called a smiley or emoticon) is used in text-based communications to convey an emotion, much in the same way we use body language. Text smiley faces are used in the same way that a person's voice or facial expression changes when having a face-to-face conversation with someone. For example, if you were joking with someone and sent a text message saying GAL (meaning "get a life") the person receiving your message would think you are making a rude comment. If you send the same message with a happy text smiley face : ) following the text abbreviation, the person would understand you were smiling when you sent the message (meaning you were joking with them).

Arun et al measure with NPR data · GitHub Skip to content Learn more Please note that GitHub no longer supports old versions of Firefox. We recommend upgrading to the latest Safari, Google Chrome, or Firefox. Surname First/given, middle, and last/family/surname diagram with J. S. Bach as example. J. S. Bach shared his given name with six immediate family members and many extended family members. Adam Grant: How to Get the Attention of Busy People Two years ago, I made a commitment to do something that made me profoundly uncomfortable. I had just finished writing my first book, and I promised my publisher that I would reach out to bestselling authors and senior leaders, asking them to read my book and consider endorsing it. I knew their quotes would go a long way toward attracting readers. But as someone who generally prefers to be on the giving side of exchanges, rather than the asking and receiving end, I knew it was time to pick up some new tips.