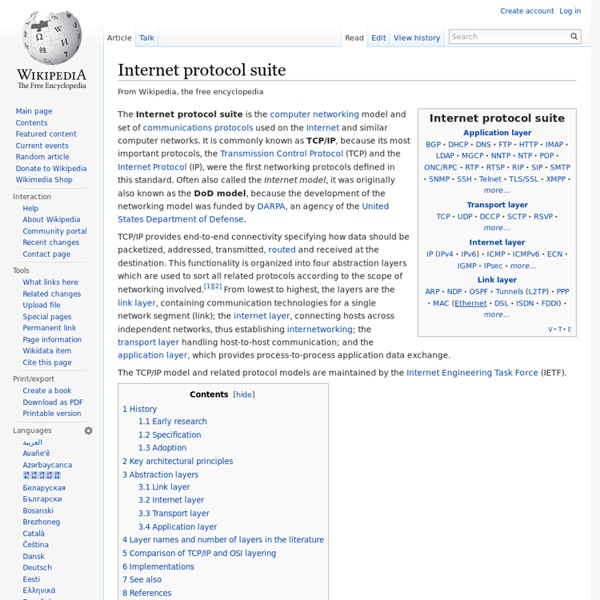 The Internet protocol suite is the computer networking model and set of communications protocols used on the Internet and similar computer networks. It is commonly known as TCP/IP, because its most important protocols, the Transmission Control Protocol (TCP) and the Internet Protocol (IP), were the first networking protocols defined in this standard. Often also called the Internet model, it was originally also known as the DoD model, because the development of the networking model was funded by DARPA, an agency of the United States Department of Defense. TCP/IP provides end-to-end connectivity specifying how data should be packetized, addressed, transmitted, routed and received at the destination. The TCP/IP model and related protocol models are maintained by the Internet Engineering Task Force (IETF). History[edit] Early research[edit] Diagram of the first internetworked connection Specification[edit] Adoption[edit] Key architectural principles[edit] Abstraction layers[edit] Link layer[edit]

Strong User Authentication on the Web David Chou Microsoft Corporation August 2008 Summary: Focusing on methods that are used to implement strong user authentication for online-consumer identities, this article aims to distill a comprehensive view of strong user authentication by examining its concepts, implementation approaches, and challenges/additional concerns at the architectural level. Contents IntroductionStrong User AuthenticationArchitectural PerspectivesState-of-the-ArtFinal ThoughtsConclusionResources Introduction Identity theft remains one of the more prevalent issues on the Internet today. One of the more exploited methods today is the gaining of account access by stealing reusable credentials for Web sites that have not yet implemented "strong" user authentication. The ease with which online identities can be stolen and used effectively has prompted many organizations and governing bodies to raise alarms. Strong User Authentication Solution Approaches Figure 1a. Figure 1b. Figure 1c. Figure 1d. Identity Proofing

How to Spy on Your "Buddy's" Network Traffic: An Intro to Wireshark and the OSI Model Wouldn't it be nice to just sit at your buddy's house, plug into his network, and see exactly what he's doing? What if it was as easy as that? What makes packet sniffers like Wireshark such potent tools is that a majority of local area networks (LANs) are based on the shared Ethernet notion. In a shared Ethernet, you can think of all of the computers in a LAN as being plugged into the same wire, and all of the traffic that travels through it can be captured. Everything. For example, assume that your network card picks up a packet from someone else's network. Now, this is an oversimplified version of what really goes on, but I'm trying to illustrate a point. Before we get into grabbing frames and causing mayhem for lulz, we need to explain what a packet is and the concept of a frame. The Open Source Interconnection (OSI) Model The model is divided into seven layers, as shown below. When your computer is receiving data, the contrary process will occur. Layer 1: Physical Layer 2: Datalink $ .

RFC 4271 - A Border Gateway Protocol 4 (BGP-4) [Docs] [txt|pdf] [draft-ietf-idr-bgp4] [Diff1] [Diff2] [Errata] Updated by: 6286, 6608, 6793 DRAFT STANDARD Errata Exist Network Working Group Y. Rekhter, Ed. Request for Comments: 4271 T. Li, Ed. Obsoletes: 1771 S. RFC 4271 BGP-4 January 2006 Table of Contents 1. RFC 4271 BGP-4 January 2006 8.2.1.5. RFC 4271 BGP-4 January 2006 1. The Border Gateway Protocol (BGP) is an inter-Autonomous System routing protocol. 1.1. This section provides definitions for terms that have a specific meaning to the BGP protocol and that are used throughout the text. POST Secure copy The term SCP can refer to one of two related things, the SCP protocol or the SCP program. SCP protocol[edit] How it works[edit] Normally, a client initiates an SSH connection to the remote host, and requests an SCP process to be started on the remote server. The remote SCP process can operate in one of two modes: source mode, which reads files (usually from disk) and sends them back to the client, or sink mode, which accepts the files sent by the client and writes them (usually to disk) on the remote host. For most SCP clients, source mode is generally triggered with the -f flag (from), while sink mode is triggered with -t (to).[2] These flags are used internally and are not documented outside the SCP source code. Remote to remote mode[edit] In remote-to-remote secure copy, the SCP client opens an SSH connection to the source host and requests that it, in turn, open an SCP connection to the destination. Issues using talkative shell profiles[edit] SCP program[edit] Copying file to host:

OpenID OpenID is an open standard and decentralized authentication protocol. Promoted by the non-profit OpenID Foundation, it allows users to be authenticated by co-operating sites (known as Relying Parties or RP) using a third party service, eliminating the need for webmasters to provide their own ad hoc login systems, and allowing users to login to multiple unrelated websites without having to have a separate identity and password for each.[1] Users create accounts by selecting an OpenID identity provider, and then use those accounts to sign onto any website which accepts OpenID authentication. The OpenID protocol does not rely on a central authority to authenticate a user's identity. Moreover, neither services nor the OpenID standard may mandate a specific means by which to authenticate users, allowing for approaches ranging from the common (such as passwords) to the novel (such as smart cards or biometrics). Adoption[edit] Technical overview[edit] Logging in[edit] Identifiers[edit] People[edit]

Hacker Fundamentals: A Tale of Two Standards Hacker Fundamentals: A Tale of Two Standards If you read my article on the OSI model, you got a good overview on communications from that model's perspective, but how does that relate to TCP/IP? We're going to take it a step further, getting into the idea behind the two address concept. How does an IP address and a MAC address work together? OSI, TCP and What's Going on Here? A good way to understand what a protocol is, would be to view it like a language. OSI was never meant to be just a model. Examples of addresses include: Hexadecimal - 12:34:56:78:9A:BC IPv4 (current standard) - 74.125.225.98 IPv6 (new format) - fe80::223:4eff:fec0:5b48 A Tale of Two Models OSI is still used today to describe network communication and for standards to unite, while the TCP model is used to show relation between the various protocols it contains. The first thing you might notice is that TCP/IP is not just one protocol, but an entire suite of protocols. Still with me? The TCP/IP Suite TCP vs. In Closing

GET Transport Layer Security Transport Layer Security (TLS) and its predecessor, Secure Sockets Layer (SSL), are cryptographic protocols designed to provide communications security over a computer network.[1] They use X.509 certificates and hence asymmetric cryptography to authenticate the counterparty with whom they are communicating,[2] and to exchange a symmetric key. This session key is then used to encrypt data flowing between the parties. This allows for data/message confidentiality, and message authentication codes for message integrity and as a by-product, message authentication.[clarification needed] Several versions of the protocols are in widespread use in applications such as web browsing, electronic mail, Internet faxing, instant messaging, and voice-over-IP (VoIP). In the Internet Protocol Suite, TLS and SSL encrypt the data of network connections in the application layer. Description[edit] If any one of the above steps fails, the TLS handshake fails, and the connection is not created. Dr. Cipher[edit]

G.E.Boyd&#039;s Everything by E-mail Web Page What is the TCP Split-Handshake Attack and Does It Affect Me? | WatchGuard Security Center If you’ve followed security news over the past few days, you’ve probably seen a lot of hoopla about a TCP split-handshake vulnerability that can affect firewalls and other networking and security devices. Many of the Media’s articles characterize this complicated TCP connection attack as, “a hacker exploit that lets an attacker trick a firewall and get into an internal network as a trusted IP connection” or as a “hole” in firewalls. I’m not sure that these descriptions properly characterize this vulnerability, and I suspect many administrators may not really understand how this attack works (let alone what it does and doesn’t allow an attacker to accomplish). I hope to try and rectify that in this post. Before I jump into a description of this attack, WatchGuard XTM owners probably want to know if they are vulnerable to this attack. What is the TCP Split-Handshake Attack? To understand the TCP split-handshake attack you need to understand how network devices build TCP connections. OK.