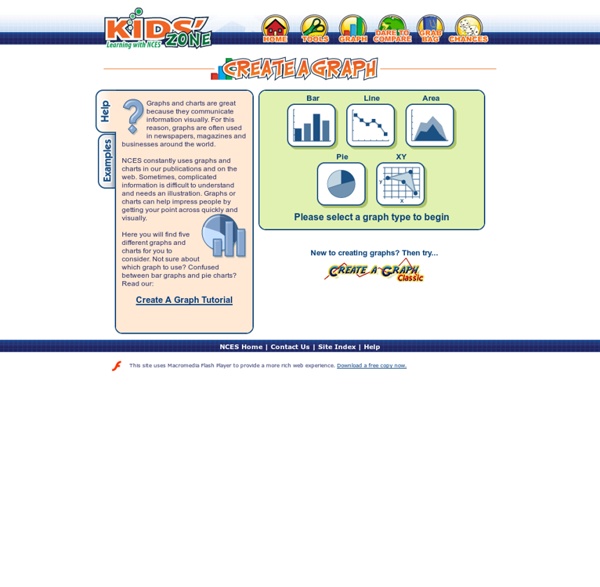 Graphs and charts are great because they communicate information visually. For this reason, graphs are often used in newspapers, magazines and businesses around the world. NCES constantly uses graphs and charts in our publications and on the web. Sometimes, complicated information is difficult to understand and needs an illustration. Graphs or charts can help impress people by getting your point across quickly and visually. Here you will find five different graphs and charts for you to consider.

8 math talks to blow your mind Mathematics gets down to work in these talks, breathing life and logic into everyday problems. Prepare for math puzzlers both solved and unsolvable, and even some still waiting for solutions. Ron Eglash: The fractals at the heart of African designs When Ron Eglash first saw an aerial photo of an African village, he couldn’t rest until he knew — were the fractals in the layout of the village a coincidence, or were the forces of mathematics and culture colliding in unexpected ways? Here, he tells of his travels around the continent in search of an answer. Algebra II - Math for Morons Like Us As of July 1, 2013 ThinkQuest has been discontinued. We would like to thank everyone for being a part of the ThinkQuest global community: Students - For your limitless creativity and innovation, which inspires us all.

45+ Free Online Tools To Create Charts, Diagrams And Flowcharts Charts and graphs are the best ways to represent information and relationship between two interlinked entities. Not only do charts and graphs inform visitors about the trend or relationship you want to show them but also add a visual connection with the visitors. Several online tools are available that help you create comprehensively designed flowcharts and graphs that worth a thousands words. Check them out and let us know what you feel about these tools. Barchart Create barchart online tool piechart graph without applet bar graph creation make a bar graph image for your report- create make save for free chart freechart data input chart

Degrees (Angles) We can measure Angles in Degrees. There are 360 degrees in one Full Rotation (one complete circle around). (Angles can also be measured in Radians) (Note: "Degrees" can also mean Temperature, but here we are talking about Angles) The Degree Symbol: ° graph: xy = –12 x Image InputX Upload an image from your computer:

Wonders of Math - The Game of Life What is the Game of Life? by Paul Callahan Rules of the Game of Life Life is played on a grid of square cells--like a chess board but extending infinitely in every direction. A cell can be live or dead. A live cell is shown by putting a marker on its square. Appstats für Python - Google App Engine The Python SDK includes the Appstats library used for profiling the RPC (Remote Procedure Call) performance of your application. An App Engine RPC is a roundtrip network call between your application and an App Engine Service API. For example, all of these API calls are RPC calls: Datastore calls such as db.get(), db.put(), or db.query().Memcache calls such as memcache.get(), or memcache.get_multi().URL Fetch calls such as urlfetch.fetch().Mail calls such as mail.send(). Optimizing or debugging a scalable application can be a challenge because numerous issues can cause poor performance or unexpected costs.

Gallery · mbostock/d3 Wiki Wiki ▸ Gallery Welcome to the D3 gallery! More examples are available for forking on Observable; see D3’s profile and the visualization collection. Please share your work on Observable, or tweet us a link! Free math games for kids at Fun4theBrain! Page NEW 1 2 3 View All Lucy is ready to dress the actor and actress from the lates movie, Zomie Prom! Thanks for all the help from her assisstants, Z. Agicthein and S.

Fun Kids Online Math Games "Sheppard offers everything from early math to pre-algebra. The lessons include interactive activities to practice concepts. Students can shoot fruit, pop balloons, and even play math man (the math version of pac man!). Fractions, place value, money, and basic operations are some of the areas that are covered. Check it out at " --Shannon Jakeman , sjakeman.blogspot.com Graphs of Functions and Algebra - Interactive Tutorials Free tutorials using java applets to explore, interactively, important topics in precalculus such as quadratic, rational, exponential, logarithmic, trigonometric, polynomial, absolute value functions and their graphs. Equations of lines, circles, ellipses, hyperbolas and parabolas are also explored interactively. Graph shifting, scaling and reflection are also included. The definition and properties of inverse functions are thoroughly investigated.