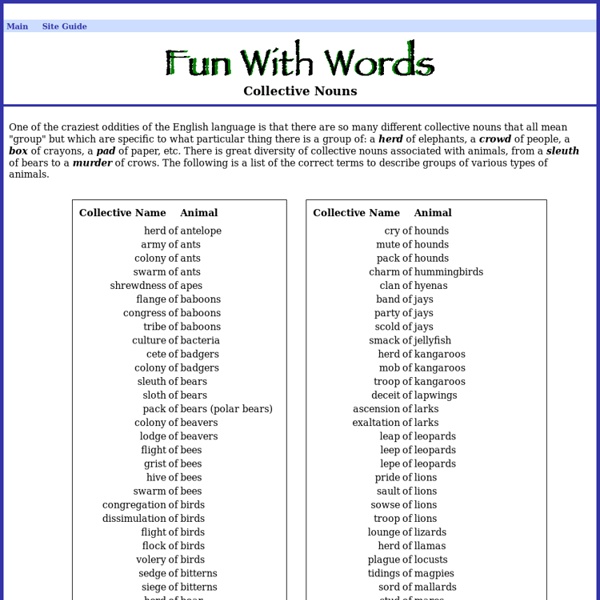 Commonly confused words Take a look at these two sentences – one of them contains a mistake: I poured over book after book. We pored over the catalogues. Are you uncertain which one is right? There are a lot of words in English that look or sound alike but have very different meanings, such as pore and pour or flaunt and flout. Here’s a quick-reference list of pairs of words that regularly cause people problems. Back to Usage. You may also be interested in: 'Loose' or 'lose'? 'Pour' or 'pore'? 'Bare' or 'bear'?

Quick Grammar Review Introduction "The complexities of English are such that the authorities themselves often stumble. The material on this site is intended to serve as a brief review of English grammar. For more extensive help, see the Links page. One final comment: Most of us remember having written work returned in which various errors had been circled or corrected or otherwise highlighted. Avoid this by focusing on punctuation during the editing stage of your writing.

Word Usage Tips - tips on correct word usage - Choice of words Be careful with the choices of words. Most words are loaded with political, social, historical, aesthetic, or moral values. A good writer tries not to offend anyone by trying to avoid such words, and using value-neutral words as far as possible. Back to Top - Which or that? Usually which and that can both be used in a sentence structure. Which is used with non-essential clauses. That is used with essential clauses. - Use of adjectives Do not use a lot of adjectives. - Starting a sentence with ‘it’ Do not start a sentence with ‘it’ unless the word or concept it refers to, is very clear. - Who and whom Who and Whom often cause confusion. Who is used when it is the subject of a sentence, or when it is a subject-case pronoun. Whom is used as the object of preposition, or when it is an object-case pronoun. - Big words, impressive words? Sometimes writers think big words look impressive. - ‘Corrupted’ words Watch for commonly used ‘corrupted’ words. - Affect and effect - Using due to

essay format A Basic Essay Format A good way to approach an essay is to envision it as a Five Part project. An essay is made up of the Introduction, Three main points (the body), and the Conclusion. So it looks like this: I. Of course depending on the length and breadth of your paper you may have more than three main points. The Intro… An Introduction should answer three questions 1. The Body… The Body consists of everything between your intro and conclusion and it is where you discuss your three main points. · Introduce your point · Explain your point · Give supporting evidence (this is where quotes go!) The Conclusion… Basically, the conclusion restates the introduction. POINT ONE+POINT TWO+POINT THREE=THESIS OR POINT ONE leads to POINT TWO which leads to POINT THREE therefore THESIS is true! So, when planning your essay consider this format: I. Organization in a paper is important not only because it makes the paper easier to write, it also guides the reader through the paper. By: Marie Lilly Home

Brainstorming What this handout is about This handout discusses techniques that will help you start writing a paper and continue writing through the challenges of the revising process. Brainstorming can help you choose a topic, develop an approach to a topic, or deepen your understanding of the topic’s potential. Introduction If you consciously take advantage of your natural thinking processes by gathering your brain’s energies into a “storm,” you can transform these energies into written words or diagrams that will lead to lively, vibrant writing. Below you will find a brief discussion of what brainstorming is, why you might brainstorm, and suggestions for how you might brainstorm. Whether you are starting with too much information or not enough, brainstorming can help you to put a new writing task in motion or revive a project that hasn’t reached completion. When you’ve got too much: There are times when you have too much chaos in your brain and need to bring in some conscious order. Freewriting Cubing

The Passive Voice Passive and Active Voices Verbs are also said to be either active (The executive committee approved the new policy) or passive (The new policy was approved by the executive committee) in voice. In the active voice, the subject and verb relationship is straightforward: the subject is a be-er or a do-er and the verb moves the sentence along. In the passive voice, the subject of the sentence is neither a do-er or a be-er, but is acted upon by some other agent or by something unnamed (The new policy was approved). Computerized grammar checkers can pick out a passive voice construction from miles away and ask you to revise it to a more active construction. We find an overabundance of the passive voice in sentences created by self-protective business interests, magniloquent educators, and bombastic military writers (who must get weary of this accusation), who use the passive voice to avoid responsibility for actions taken. Passive Verb Formation Verbals in Passive Structures

Clear, Concise Sentences: Use the active voice At the heart of every good sentence is a strong, precise verb; the converse is true as well--at the core of most confusing, awkward, or wordy sentences lies a weak verb. Try to use the active voice whenever possible. Active vs. passive voice In a sentence written in the active voice, the subject of sentence performs the action. Active: The candidate believes that Congress must place a ceiling on the budget. Passive: It is believed by the candidate that a ceiling must be placed on the budget by Congress. Active: Researchers earlier showed that high stress can cause heart attacks. Passive: It was earlier demonstrated that heart attacks can be caused by high stress. Active: The dog bit the man. Passive: The man was bitten by the dog. Converting sentences to active voice Here are some tips and strategies for converting sentences from the passive to the active voice. Look for a "by" phrase (e.g., "by the dog" in the last example above). When to use passive voice To be tactful by not naming the actor

Voice:  Active and Passive Active voice In most English sentences with an action verb, the subject performs the action denoted by the verb. These examples show that the subject is doing the verb's action. Because the subject does or "acts upon" the verb in such sentences, the sentences are said to be in the active voice. Passive voice One can change the normal word order of many active sentences (those with a direct object) so that the subject is no longer active, but is, instead, being acted upon by the verb - or passive. Note in these examples how the subject-verb relationship has changed. Because the subject is being "acted upon" (or is passive), such sentences are said to be in the passive voice. NOTE: Colorful parrots live in the rainforests cannot be changed to passive voice because the sentence does not have a direct object. To change a sentence from active to passive voice, do the following: 1. 2. 3. It is generally preferable to use the ACTIVE voice. 1. 2. 3. Examples

Tips & Tools: Quick reference tips Readers prefer active voice sentences, and we should try to use the active voice in most of our business writing to communicate our message most effectively. Active voice clearly identifies the action and who is performing that action. Unfortunately, much of government writing is in the passive voice, giving documents a wordy, bureaucratic tone. Over time, writing in the passive voice simply becomes a habit, one we should all work to change. What is active/passive voice? To know whether you are writing in the active or passive voice, identify the subject of the sentence and decide whether the subject is doing the action or being acted upon. Passive Voice: the subject is the receiver of the action. When we write in the passive voice, we add some form of the helping verb "to be" (am, is, are, was, were, being, or been) to an otherwise strong verb that really did not need help. Passive: Additional information (subject) can be obtained (action) by employees from our website. Passive: Mr. Or:

Grammar Handbook « Writers Workshop: Writer Resources « The Center for Writing Studies, Illinois The voice of a verb tells whether the subject of the sentence performs or receives the action. In English there are two voices: active and passive. Active Voice In active voice, the subject performs the action expressed by the verb: The student wrote a song. Passive Voice In passive voice, the subject receives the action expressed by the verb: A song was written by the student. Forming Tenses of Passive Verbs The passive voice always consists of two parts: a form of the verb "to be" + past participle: Uses of Passive Voice Use the passive voice to: Call attention to receiver of the action rather than the performer: The professor was hit by three snowballs. Active and Passive Voice in Writing The choice between using the active or passive voice in writing is a matter of style, not correctness. weak, passive: The skater was slammed into the wall by Maria. strong, active: Maria slammed the skater into the wall. Hints for Identifying the Passive Voice

Sciences What this handout is about Nearly every element of style that is accepted and encouraged in general academic writing is also considered good practice in scientific writing. The major difference between science writing and writing in other academic fields is the relative importance placed on certain stylistic elements. What is scientific writing? There are several different kinds of writing that fall under the umbrella of scientific writing, such as: Peer-reviewed journal articles (presenting primary research)Grant proposals (you can’t do science without funding)Literature review articles (summarizing and synthesizing research that has already been carried out)Popular science articles (communicating scientific discoveries to a non-scientific audience) As a student in the sciences, you are likely to spend some time writing lab reports, which often follow the format of peer-reviewed articles and literature reviews. How can I make my writing more precise? Word and phrasing choice Level of detail