The 5 Things I'd Tell My 21 Year Old Entrepreneurial S... 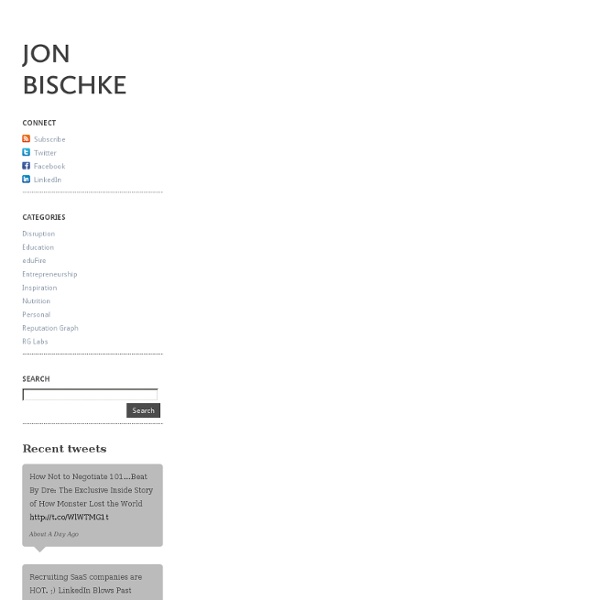 12 years ago I set out on my first foray into the world of entrepreneurship. The company was called MCSETutor.com (we later changed the name to the equally obtuse 2000Tutor.com) and while it wasn’t a huge success by dot com era standards we did sell it for a tidy profit. But looking back I’m shocked at how little I knew about entrepreneurship. As I’m sure any entrepreneur would love to do, I’d give anything to step back in time 12 years and have a chat with my 21 year old self. And while I can’t do that I do love to share lessons with as many young entrepreneurs as I can. I’ve spoken a bunch at colleges and other organizations for young entrepreneurs. #1 – Take as much risk as you can as early in life as you can. I’m not talking stupid risks. #2 – Nail the fundamentals. Take some of that time and use it to build skills that will make you more effective and productive the rest of your life. #3 – Surround yourself with people who expect you to succeed in a big way. I’m lucky. Fantastic.

10 Common Mistakes That Startup and Small Companies Make Young companies have small margins for error. Mistakes made early on can sink a company before its gets off the ground. Below is a list of 10 common mistakes made by young, small companies. In the list below, I use the generic term “product” to refer to either a product or a service. Over the next few posts, I will expound on these ideas; for now, here is the list : “Drinking Your Own Kool-Aid” – Overestimating the Enthusiasm for Your Product/Service – thinking your product is more special than your customers perceive. In the entrepreneurial spirit of “under-promise and over-deliver,” here are two more mistakes young companies make: Never Finishing the Product – the “never time to do it right, but there is always time to do it over” syndrome. Disclaimer – as the veteran of six startup companies (two that were successfully sold), these are mistakes I have seen time and again.

What do we want? Our Background We are a team of people with backgrounds in areas of IT, design and business administration with the same vision regarding the future of portable computers. We started to work on this concept in 2009 and finalized it after a few months of intensive work. Our Intentions Our very first steps were not directly related to a production of Rolltop. Objectives Our primary objective is to realize our vision and concept Rolltop and to bring it to the people in the next step. Partner Currently we are in the middle of the partner identification process and development of a final technical Rolltop design, including pre-selection of electronic sub-parts and hardware platform design. If are you interested, please contact us.

One dish is served free -- with gratitude -- at Cafe Gratitude | Daily Dish... There’s one dish at Café Gratitude, the new vegan restaurant on North Larchmont Boulevard in Los Angeles, that stands out from the others. It’s called the I Am Grateful bowl. Piled high with shredded kale, quinoa, black beans and garlic-tahini sauce, it's filling, flavorful, healthful and free. That's right. $0. The cafe says it’s the "community supported grain bowl" and lists the dish's suggested value ($7) but doesn't require payment. One customer, Daudi McLean, a vegan chef himself, made his way to the cafe when it first opened. Recently, McLean’s family found themselves without the money they once had. “My son and I used to feed the homeless,” McLean said. It is an idea that the San Francisco-based restaurant chain's co-founder, Matthew Engelhart, and his son, Ryland, one of the general managers in L.A., thought of one Christmas morning about 3 1/2 years ago after seeing how people were being affected by the changing economy. Before every shift, servers are asked two questions.

Do State Business Taxes Really Matter? These days talk about taxes of any kind, unless cuts are being proposed, is the third rail of American politics. Many business people and of course doctrinaire conservatives insist that lower tax rates create more incentives for investment, business formation and economic growth. Tax cuts, they continue, are thus a key mechanism for spurring economic growth. Though we haven’t seen much of the Laffer Curve since the heyday of Reaganism, a new generation of supply-siders is arguing for more tax cuts despite our already-staggering deficits. A new study gives us a new tool with which to measure the effects of state taxes on economic development. The map above by Zara Matheson of the Martin Prosperity Institute maps the index across the 50 states. But to what extent are the tax burdens that states impose on new investment associated with the differences in their economic performances?

Future computers to its next level! Future technology Rene Lee has come up with an exciting device called Bento. It is a single modular device that integrates a tablet, notebook, smartphone, hard drive and battery. The device can be used independently or as a processing network. The basic laptop structure touts a 15″ OLED screen which serves as its structural base. The tablet can display a keyboard and the screen of the notebook can do visualization. Mini Computer!

COST News Release: Competitiveness of State and Local Business Taxes on New Investment The Council On State Taxation (COST) is pleased to announce the release of a new study ranking states by tax burden on new investment. The study, “Competitiveness of State and Local Business Taxes on New Investment,” is the latest contribution by Ernst & Young in conjunction with COST to the growing field of research in the state and local business tax arena. The study assesses the competitiveness of current state and local business taxes on mobile capital investment on a state-by-state basis.The rankings consider state and local statutory tax provisions and the financial characteristics of the new investments. The analysis focuses on capital investments in industries that have location choices such as factories or headquarters, rather than those like retailers or hotels that are tied to a specific geography. The estimated tax burdens on selected investments are combined to provide an overall measure of the business tax competitiveness of each state. Click here to view the full study.

Alarming Ring by Meng Fandi Alarming Ring Ring is a vibrating alarm designed for people who hate the loud blaring sounds of a typical alarm. The charging cradle is where you set what time you want each ring to go off. The ring fits over the tip of your finger and when that opportune time arrives, it vibrates. Putting the ring back on the dock shuts off the alarm. The benefits are two-fold. Designer: Meng Fandi Illinois' business climate outshines its neighbors' | In Other News Lost amid headlines about rising corporate taxes, companies threatening to leave the state and rival governors wooing others is an important fact: Illinois is a better place to do business than surrounding states. A Crain's analysis of the factors most important to a healthy business climate shows that Illinois outranks Wisconsin, Indiana, Missouri and Iowa. Dozens of interviews with CEOs, entrepreneurs and experts in corporate site selection confirm that Illinois has more of what businesses need to thrive. The state has a larger pool of talented workers, bigger markets, more money for investment and better transportation. Together, these advantages outweigh the rising taxes and state budget deficits that have put Illinois in an unwelcome spotlight. "It's not just taxes or a patch of land: It's all about the people and the human capital," says Gregory Brown, CEO of Schaumburg-based Motorola Solutions Inc., which employs about 5,000 in the state. Tax burden in Illinois lower than neighbors

Microscopic Solar Cells Could See More Sunlight Researchers at Sandia National Laboratories have shrunk silicon solar cells down to the micro scale, opening new possibilities for improved efficiency. Multi-crystalline silicon, currently the gold standard for solar-cell efficiency, is expensive and produces cells that are heavy and brittle. Sandia’s microscopic silicon solar cells use 100 times less material while operating with the same efficiency. In addition to lower materials costs, the smaller scale of these cells means they could be incorporated into compact optical systems for cheaper light-tracking and concentration. Researchers might even suspend them in inks that could be printed onto plastic to make efficient, flexible silicon-solar modules. “In microsystems, you’re looking for things that become cheaper, perform better, and gain new functionalities,” says Gregory Nielson, head scientist on the project. So far, the Sandia researchers have assembled and tested a single micro solar cell as proof of principle.

Advancing Advanced Manufacturing Region by Region - Up Front Blog At last a more serious discussion of manufacturing has begun. In just the last month, strong voices have by turns questioned whether manufacturing merits special attention, contended that it does, and then begun to say which sort of manufacturing matters most. Just last week the Metropolitan Policy Program joined with the CONNECT Innovation Institute to produce a major event that contended that regardless of its diminished employment manufacturing remains a powerful engine of innovation, a driver of exports that are taming our trade deficit, and a source of good-paying jobs. Now, the National Science and Technology Council has taken a stab at laying out what the federal government might do to advance the more “advanced” higher-tech segments of the manufacturing sector. Again, all of these goals are important, but it is gratifying to see that the new strategy heavily stresses the critical role of regional industry clusters in propelling advanced industries.