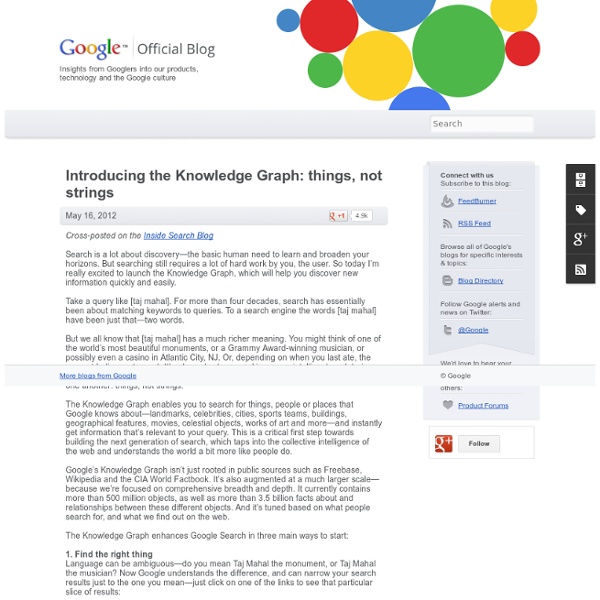 Cross-posted on the Inside Search Blog Search is a lot about discovery—the basic human need to learn and broaden your horizons. But searching still requires a lot of hard work by you, the user. So today I’m really excited to launch the Knowledge Graph, which will help you discover new information quickly and easily. Take a query like [taj mahal]. For more than four decades, search has essentially been about matching keywords to queries. To a search engine the words [taj mahal] have been just that—two words. But we all know that [taj mahal] has a much richer meaning. The Knowledge Graph enables you to search for things, people or places that Google knows about—landmarks, celebrities, cities, sports teams, buildings, geographical features, movies, celestial objects, works of art and more—and instantly get information that’s relevant to your query. Google’s Knowledge Graph isn’t just rooted in public sources such as Freebase, Wikipedia and the CIA World Factbook. 1. 2. 3.

Multilingual and multinational site annotations in Sitemaps Webmaster level: All In December 2011 we announced annotations for sites that target users in many languages and, optionally, countries. These annotations define a cluster of equivalent pages that target users around the world, and were implemented using rel-alternate-hreflang link elements in the HTML of each page in the cluster. Based on webmaster feedback and other considerations, today we’re adding support for specifying the rel-alternate-hreflang annotations in Sitemaps. Using Sitemaps instead of HTML link elements offers many advantages including smaller page size and easier deployment for some websites. To see how this works, let's take a simple example: We wish to specify that for the URL targeting English language users, the equivalent URL targeting German language speakers Up till now, the only way to add such annotation is to use a link element, either as an HTTP header or as HTML elements on both URLs like this:

Data Dumps - Freebase API Data Dumps are a downloadable version of the data in Freebase. They constitute a snapshot of the data stored in Freebase and the Schema that structures it, and are provided under the same CC-BY license. The Freebase/Wikidata mappings are provided under the CC0 license. Freebase Triples Improved Tools for Driving Search, Journalism, and Content Strategy Keywords are out! Kaput! Passé! Midway: A Sobering Message from the Plastic Gyre The arresting photography of Chris Jordan is the type which, once seen, one can no longer be the same. His work deals with mass culture: specifically the enormity and power of humanities collective behaviors. In his ongoing project, Midway, he deals with the shocking consequences modern society has even on remote and distant shores.

Most SEOs Negatively Impacted By Google's Penguin Update About a month ago, we polled our readers asking how they were impacted by the Google Penguin update. We have well over a 1,000 responses and I wanted to share them with you. Keep in mind, those who were negatively impacted are probably more likely to take the poll. Freebase Freebase is a large collaborative knowledge base consisting of metadata composed mainly by its community members. It is an online collection of structured data harvested from many sources, including individual 'wiki' contributions.[2] Freebase aims to create a global resource which allows people (and machines) to access common information more effectively. It was developed by the American software company Metaweb and has been running publicly since March 2007. Metaweb was acquired by Google in a private sale announced July 16, 2010.[3] Google's Knowledge Graph is powered in part by Freebase.[4]

Iconic Artists at Work: Watch Rare Videos of Picasso, Matisse, Kandinsky, Renoir, Monet and More Claude Monet, 1915: We've all seen their works in fixed form, enshrined in museums and printed in books. But there's something special about watching a great artist at work. Over the years, we've posted film clips of some of the greatest artists of the 20th century caught in the act of creation. First Report Of Google Penguin Recovery The Google Penguin update first touched down on April 24th and many webmasters that were hit by this update were frantically making changes to their web site in anticipation for a Penguin refresh. That refresh happened late Friday evening and we have one report that appears to be a legit Penguin recovery. An SEOmoz story named How WPMU.org Recovered From The Penguin Update has a pretty good case of a likely Penguin recovery. How can we know it is a pretty good case of a recovery? The Google Analytics graphs show a huge dip in traffic on April 24th and then a huge spike on May 26th, returning the site to pre-Penguin traffic levels. We have reached out to Google to see if this site did indeed recover from the Penguin update but from the looks of it, it has.

Basic Concepts - Freebase API If you are new to Freebase, this section covers the basic terminology and concepts required to understand how Freebase works. Graphs Topics Freebase has over 39 million topics about real-world entities like people, places and things. Number 3 / Public Articles / ORMS-Today / IOL Home - INFORMS.org By Douglas A. Samuelson New computer software and analytical methods offer promising ways to combine two kinds of data traditionally separated: quantitative and qualitative information. What data mining became in the 1990s, text mining/text analytics may well become in the current decade – a powerful way to find patterns not previously suspected. Statistical analysis and understanding natural language can go together.

New type of silicone exhibits both viscous and elastic properties Looking for a more effective solution to the all-too-common wobbly table dilemma than a folded up bit of cardboard or piece of rubber under the leg, University of Virginia physicist Lou Bloomfield created a new type of silicone rubber called Vistik – it's malleable enough to take on any shape when pressed, but is still resilient enough to offer support, as it gradually starts to return to its original shape as the pressure is released. The material could have many applications ... beyond just steadying up wobbly tables. Vistik is a viscoelastic material, meaning that it exhibits both viscous and elastic properties. As a result, when compared to something such as conventional silicone rubber, there’s a considerable time lag in its response to continuous pressure.

Internet Nonprofit Applies for New Domains: Meet .ngo and .ong [EXCLUSIVE] The Public Interest Registry (PIR), the non-profit that manages and operates the .org domain, has formally submitted its applications to the Internet Corporation for Assigned Names and Numbers (ICANN) for the .ngo and .ong domain extensions. The application process is part of ICANN’s initiative to expand domain extensions across the Internet as early as 2013. The .org top-level domain (TLD) is the world’s third largest — behind .com and .net — with more than 9.9 million web addresses registered worldwide.