The Rise of Fascism, once again

Mikael Kallavuo: Mihin kohtiin demokratia–fasismi -akselilla Jussi Halla-ahon näkökulmat sijoittuvat? – Migrant Tales. “Qanon” is Propaganda, and we know who’s responsible. So how did we get from “saving the world”, to a full-blown destructive death cult? 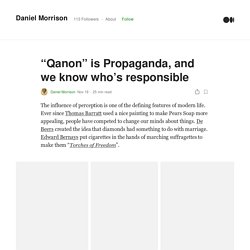 How do people reconcile a spiritual belief in a “New Age” with an administration like Trump’s? The Conspiracy Virus is a powerfully manipulative tool which does a lot of the work of course, but it’s a Lie. Someone had to tell it. So who was it, how could they, and why would they? In the simplest terms, the answer is Fascism. We’re inclined in the West to think that we beat Fascism in the 40s. This is Barbra Marx Hubbard, an American author who believed that “humanity was on the threshold of a quantum leap if newly emergent scientific, social, and spiritual capacities were integrated to address global crises” Kolumni: Nationalistit koolla ennenkin. What Happens When You Believe in Ayn Rand and Modern Economic Theory - Evonomics. Donald Trump inauguration live: Parade and protests for new US president, who returns Winston Churchill bust to Oval Office.

All of Donald Trump's Business Ties in One Overwhelming Visualization. Before Donald Trump was the president, he was a businessman. 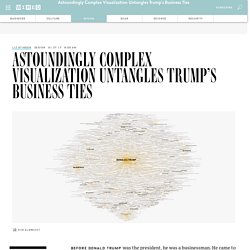 He came to office leading a vast business enterprise that includes real estate, casinos, and a lucrative branding operation. “The network is huge,” says designer Kim Albrecht, whose riveting data visualization Trump Connections attempts to untangle it all. Albrecht used data from BuzzFeed’s TrumpWorld investigation into the president’s 1,500-odd business connections to create two visualizations. The first places Trump at the center of an enormous web. The other, which resembles a family tree, deconstructs that network person by person, business by business. An interactive version of the data viz lets you click on a name or business to view an expanded list of connections.

Robert Mercer, the most important political money man you've never heard of. In 1993, Mercer and IBM colleague Peter Brown got a recruitment letter from Renaissance. 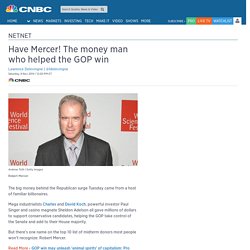 They initially threw the letters out, according to rare October 2013 public comments by Brown at Johns Hopkins University, but ultimately decided to leave the IBM job at which they were "very happy. " Mercer was struggling with paying college tuition bills for his three daughters, according to Brown, and Renaissance was offering 50 percent more pay. Simons—a former government defense code breaker, chairman of the mathematics department at Stony Brook University and a prize-winning mathematician—needed coding help and Mercer and Brown provided it. Renaissance, which employs about 75 science Ph.D. recipients, looks for unusual market patterns and then writes computer codes to trade on them. Exclusive: Steve Bannon, Trump’s New C.E.O., Hints at His Master Plan. Even for a campaign creating regular media tremors, the hiring of Stephen K. 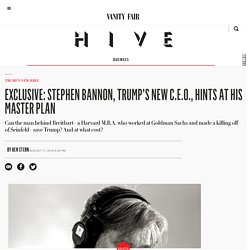 Bannon as the new campaign C.E.O. for Donald Trump has to count as a real shock. Trump is a first-time candidate who has talked about professionalizing his campaign, and yet he has hired a media bomb-thrower with no experience on the trail. But on another level, it is no surprise, since for years there has been a political symbiosis between Trump, Bannon, and Breitbart Media, the news organization that Bannon has led for the last four years.

In truth, Bannon and Breitbart Media were Trump before Trump, creating the political philosophy and the political army in waiting that has been the engine for the candidate’s astonishing rise in American politics. To understand the relationship between Trump and Bannon, you need to start with Andrew Breitbart himself. Breitbart unexpectedly died of heart failure, in 2012, at the age of 43, but the movement that set his media company in motion did not end with his death. Steve Bannon: This Man Is the Most Dangerous Political Operative in America. Steve Bannon runs the new vast right-wing conspiracy—and he wants to take down both Hillary Clinton and Jeb Bush. 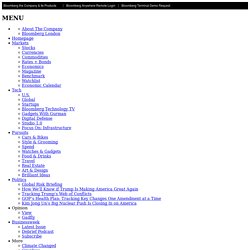 Hate in the Age of Trump: A Photo Essay. We are forced to confront many things in the images that photographer Johnny Milano spent five years capturing. 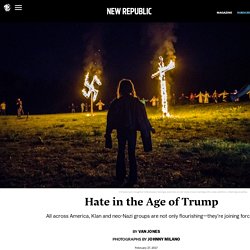 The ceremonial burning of a cross and a swastika in an open field. The silhouette of a child, a young and defenseless observer of hate, situated between the flaming structures. The Nazi symbol on shirt and skin. Some of the images look modern; others seem straight out of an earlier era. They represent a people striving to keep with tradition, while simultaneously looking to rebrand their beliefs and appeal to new followers. Taken together, Milano’s images make it impossible to deny that white supremacy is alive and well in this country. These groups—Klansmen, neo-Nazis, white nationalists—did more than talk and meet and march. It would be all too easy to turn away from this reality, or consign it to the distant past.