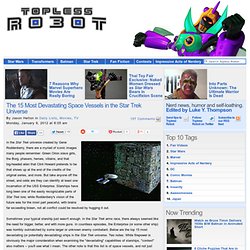 But take anyone off the street, and odds are they can identify at least one incarnation of the USS Enterprise. Starships have long been one of the easily recognizable parts of Star Trek lore; while Roddenbery's vision of the future was for the most part peaceful, with brains far exceeding brawn, not all conflict could be resolved by hugging it out. Sometimes your typical starship just wasn't enough. Franz Joseph and Star Trek’s Blueprint Culture. As part of a larger project I’m preparing on “blueprint culture” — fan subcultures devoted to drawing, drafting, charting, mapping, and playing the worlds of science-fiction media — here is a brief history, excerpted from my book manuscript on special effects and transmedia, of Franz Joseph and the Starfleet Technical Manual he created in 1975. 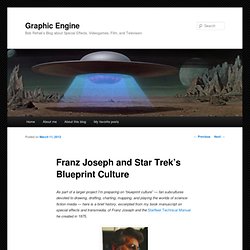 One man in particular would dominate Star Trek’s design-oriented fandom in the 1970s. Though not a fan himself, Franz Joseph Schnaubelt was the first to awaken a broad base of fans to the pleasures of charting and extending Star Trek’s diegetic backdrop. Starship Schematics Database. FSD: Starship Class Database. Round 2 Models - AMT models, MPC models and Polar Lights models, including Star Trek kits. Probing the Ships of Star Trek: The Motion Picture Probing the Ships ofStar Trek: the Motion Picture Concept designer Andrew Probert discusses his career and work on the Enterprise Refit and Vulcan Shuttle By Jamie Hood Andrew Probert is one of the most revered designers in Star Trek's history. 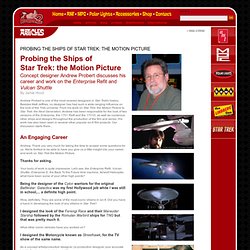 Besides Matt Jeffries, no designer has had such a wide ranging influence on the look of the Trek universe. An Engaging Career Andrew, Thank you very much for taking the time to answer some questions for us. Thanks for asking. Your body of work is quite impressive. Being the designer of the Cylon warriors for the original Battlestar: Galactica was my first Hollywood job while I was still in school,... a definite high point. Wow, definitely. I designed the look of the Ferengi Race and their Marauder Starship followed by the Romulan Warbird ships for TNG but that was pretty much it. What other iconic vehicles have you worked on? I have not officially been a production designer... yet. I'd have to agree. Www.trekplace.com. Franz Joseph Timeline by Karen Dick with annotations by Greg Tyler Entries here are condensed from FJ's "Writing Activities Log" (14 April 1973 - 14 April 1988) and FJ's "Design Work, Script, and Correspondence - Planet Earth" notebook (1974). 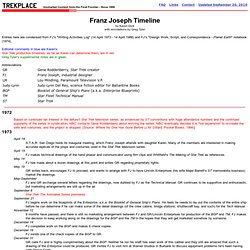 Star Trek production timelines, as far as Karen can determine them, are in red. Abbreviations Based on continued fan interest in the defunct Star Trek television series, as evidenced by ST conventions with huge attendance numbers and the continued popularity of the series in syndication, NBC contacts Gene Roddenberry about reviving the series. April 14 S.T.A.R. April 15. The Star Trek Gallery - Ships. Star Trek: Ships of the Line. You may be looking for the books Ship of the Line or Ships of the Line. 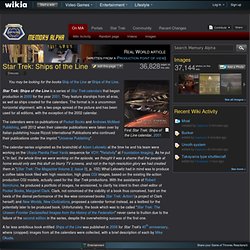 Star Trek: Ships of the Line is a series of Star Trek calendars that began production in 2000 for the year 2001. They feature starships from all eras, as well as ships created for the calendars. The format is in a uncommon horizontal alignment, with a two-page spread of the picture and has been used for all editions, with the exception of the 2002 calendar. The calendars were co-publications of Pocket Books and Andrews McMeel Publishing, until 2012 when their calendar publications were taken over by Italian publishing house Rizzoli International Publications who continued their publications under the imprint "Universe Publishing".

Sci-Fi Starship Size Comparison » Star Trek Minutiae. I have been a fan of science fiction for more than fifteen years, since my parents introduced me to Star Wars some time in 1991. 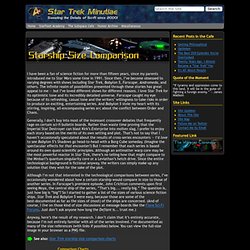 Since then, I’ve become obsessed to varying degrees with shows including Star Trek, Babylon 5, Farscape, Andromeda, and others. The infinite realm of possibilities presented through these stories has great appeal to me — but I’ve loved different shows for different reasons. I love Star Trek for its optimistic tone and its incredibly detailed universe. Farscape caught my eye because of its refreshing, casual tone and the writers’ willingness to take risks in order to produce an exciting, entertaining series. 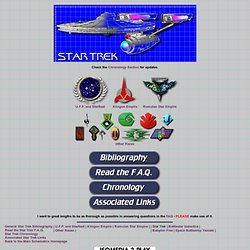 I went to great lengths to be as thorough as possible in answering questions in the FAQ - PLEASE make use of it. Category:Star Trek ships. Star Trek The Next Generation: Technical Manual (9780671704278): Rick Sternbach, Michael Okuda. Starship Modeler: Ships of the Federation. Specification deck A starship Enterprise NX-01. Www.trekplace.com. Forgotten Starships: "Canon" References to Star Trek Spacecraft Designed by Franz Joseph by Greg Tyler February 15, 2003 Updated December 30, 2005 Introduction At a time when nearly every visual detail that's barely distinguishable in a Star Trek episode or feature film is declared "canon," that is a "real" element of the fictional Star Trek universe, it is somewhat surprising that many fans do not take into consideration the existence of a number of starship classes that appear, or certainly seem to appear, in the first three Star Trek feature films. 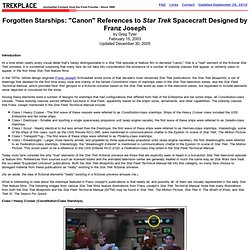 Among these elements were a number of designs for starships that had configurations that differed from that of the Enterprise and her sister ships, all Constitution-class vessels. Class I Heavy Cruiser - The first wave of these vessels were referred to as Constitution-class starships. (As an aside, the idea of fictional elements "really" existing in a fictional universe amuses me.) Class I Heavy Cruiser (Constitution-Class Starships) Conclusion. 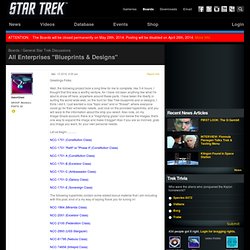 I thought that this was a worthy venture, for I have not seen anything like what I'm abut to show off here, anywhere around these parts. I have taken the liberty in surfing the world wide web, on the hunt for Star Trek blueprints and or designs, I think I did it. I just wanted a nice "topic area" and or "thread", where everyone could go for their schematic needs. Just click on the provided hyperlinks, and you will warp to the information about the ship you select.