Streamlined Mimi ROV. Once we completed building our sailboat, we had planed to build an ROV with side scan sonar that could be towed behind. 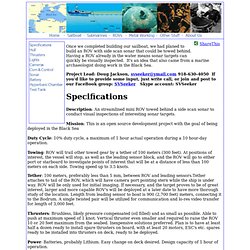 Having a ROV already in the water means sonar targets can quickly be visually inspected. It's an idea that also came from a marine archaeologist doing work in the Black Sea. Project Lead: Doug Jackson, svseeker@ymail.com 918-630-4050 If you'd like to provide some input, just write call, or join and post to our FaceBook group: SVSeeker Skype account: SVSeeker Description: An streamlined mini ROV towed behind a side scan sonar to conduct visual inspections of interesting sonar targets. Mission: This is an open source development project with the goal of being deployed in the Black Sea Duty Cycle: 10% duty cycle, a maximum of 1 hour actual operation during a 10 hour-day operation. Towing: ROV will trail other towed gear by a tether of 100 meters (300 feet). Thrusters: Brushless, likely pressure compensated (oil filled) and as small as possible. MATE - Marine Advanced Technology Education.

About MATE The mission of the Marine Advanced Technology Education (MATE) Center is to provide the marine technical workforce with appropriately educated workers and to use marine technology to create interest in and improve STEM education. 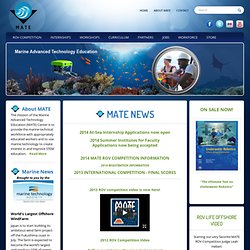 Read More Marine News Brought to you by the World's Largest Offshore WindFarm Japan is to start building its ambitious wind farm project off the Fukushima coast in July. Robots Help Discover Hidden Faults Hidden beneath ocean waves and masked by sand and mud on the seafloor, underwater faults are notoriously difficult to see and even more difficult to study. ROV. ROVs or Remotely Operated Vehicles are quickly making many submarines obsolete. 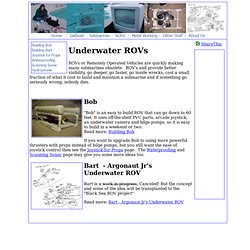 ROV's and provide better visibility, go deeper, go faster, go inside wrecks, cost a small fraction of what it cost to build and maintain a submarine and if something go seriously wrong; nobody dies. Bob "Bob" is an easy to build ROV that can go down to 60 feet. It uses off-the-shelf PVC parts, arcade joystick, an underwater camera and bilge pumps, so it is easy to build in a weekend or two.

Read more: Building Bob If you want to upgrade Bob to using more powerful thrusters with props instead of bilge pumps, but you still want the ease of joystick control then see the Joystick for Props page. Bart - Argonaut Jr's Underwater ROV Bart is a work in progress, Canceled! Read more: Bart - Argonaut Jr's Underwater ROV. Homebuilt Rovs. How I Got Started I've always been interested in anything mechanical or robotic but I got started building Rov's as a result of fishing. 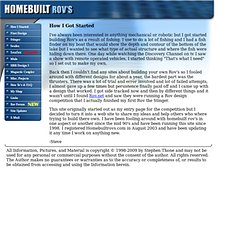 I use to do a lot of fishing and I had a fish finder on my boat that would show the depth and contour of the bottom of the lake but I wanted to see what type of actual structure and where the fish were hiding down there. One day while watching the Discovery Channel on tv I saw a show with remote operated vehicles, I started thinking "That's what I need" so I set out to make my own. Back then I couldn't find any sites about building your own Rov's so I fooled around with different designs for about a year, the hardest part was the thrusters.

There was a lot of trial and error involved and lot of failed attempts, I almost gave up a few times but persistence finally paid off and I came up with a design that worked. -Steve. OPENROV.