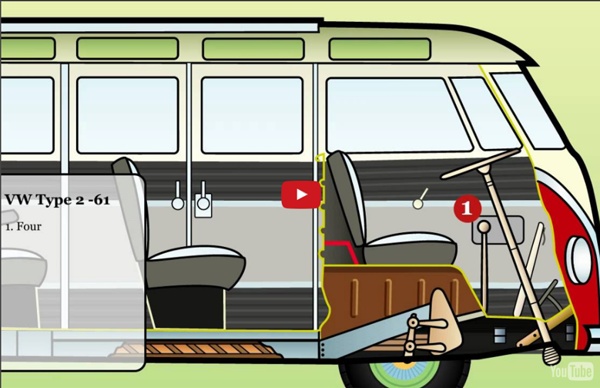 Using Cows to Define Politics Ever needed to know the difference between communism and socialism? What about the difference between American corporations and French corporations? Try taking an explanation from Howard Lindzon about what each political perspective would do with two cows, and then visualize it with a hilarious infographic created by Kyla Tom Design on Visually.

Responsive Web Design Interactive Infographic This infographic is the first place to check when you need well researched information on responsive web design. With basic glossary, 15 blog articles, 5 quotes, 11 free PDF books, Google recommendations, as well as 65 tutorials, 20 plugins, 19 tools, and ready-made responsive website templates, this page is meant to classify a whopping amount of RWD content and give you exhaustive answers & tips to help improve your website designs. Use this, it will make you a better responsive web designer. Extreme Close-Ups of the Human Eye Don’t know about you guys, but we just love looking at things really close up! Some of you probably remember Looking at the World through a Microscope (Part I) and 20 Incredible Eye Macros, however this time let’s take a look at extreme close-ups of the human eye. An Armenian physics teacher Suren Manvelyan used his friends, colleagues and pupils as models to make these amazing ocular portraits.

The First Org Chart Ever Made Is a Masterpiece of Data Design Look at most of organizational charts today and you’ll see the standard top-down pyramid flowing linearly from the big dog down to lower-level managers and minions. But the first modern-day organizational chart wasn’t made to remind lower-level employees who they really work for. No, one of the first company-wide organizational charts was actually a 19th century invention of necessity. Back in the mid-1800s, the Erie Railroad was a thriving but disorganized company responsible for transporting goods throughout the Northeast.

15 Ways to Get Past an Awkward Moment Aug 13, 2012 We’ve all been in awkward situations, our lives are full of them. Nobody’s perfect, but how you handle it can turn an awkward moment into a partial win. Below you will see 15 awkward situations and what these people did to try and turn it around. It might not always work but the best you can do is try, and nobody can take that away from you! Moodwall / Studio Klink and Urban Alliance Media architecture collective Urban Alliance has recently finished the Moodwall: a 24 meter long interactive light installation in Amsterdam. The Moodwall is situated in a pedestrian tunnel and interacts with people passing by, improving the atmosphere in the tunnel and making people happy and feel less unsafe. The interactive urban wallpaper is built out of about 2500 leds behind a ribbed semi-transparent wall. The curves in the wall make it less suitable for grafitti and improve the visibility of the content for the side.