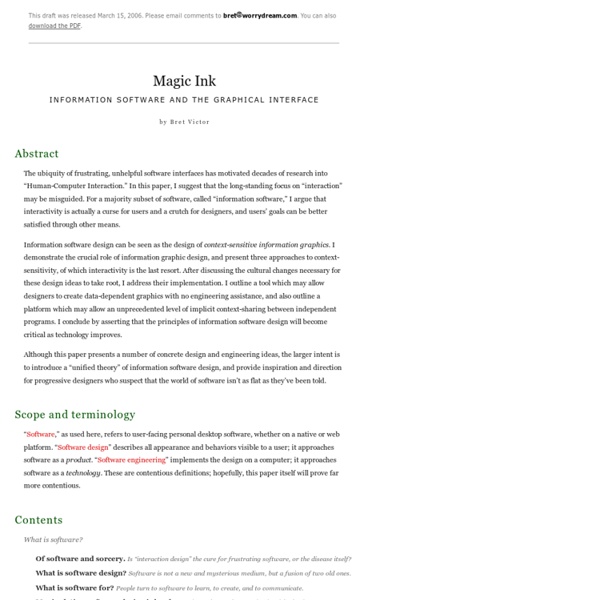 This draft was released March 15, 2006. Please email comments to bret worrydream.com. You can also download the PDF. Information Software and the Graphical Interface by Bret Victor Abstract #The ubiquity of frustrating, unhelpful software interfaces has motivated decades of research into “Human-Computer Interaction.” #Information software design can be seen as the design of context-sensitive information graphics. #Although this paper presents a number of concrete design and engineering ideas, the larger intent is to introduce a “unified theory” of information software design, and provide inspiration and direction for progressive designers who suspect that the world of software isn’t as flat as they’ve been told. Scope and terminology #“Software,” as used here, refers to user-facing personal desktop software, whether on a native or web platform. Of software and sorcery #A computational process is indeed much like a sorcerer’s idea of a spirit. #This is a software crisis, and it isn’t news. Related:  Designs

Cyberspace - Networking, Games, and Virtual Environments Some people no doubt consider Second Life the ideal platform for cyberspace. It's an artificial world which provides a great deal of control to the user. You can specify your appearance and control your interaction with the world. Even more, it's a social environment where people can meet and exchange views (and information) in relative anonymity. I have to disagree. Second Life falls short of my personal definition of cyberspace. A better answer to creating cyberspace is a purpose-built interface to the world's data. I'm a fringe-dweller. The internet has an amazing amount of data on it, both immediately available as html, and as data in other protocols such as P2P file sharing, instant message, VOIP, and SQL. Given the amount of data available for mining, is there a better way to view all of it than a web browser and a stable full of one-off applications? The Challenge Design an interface to allow ready access to the world's data. Key questions:

Light bulbs Infographics Mar27 Earth Hour Awareness visualized by: Neo Mammalian Studios Did you switched off on March 23? It was the Earth Hour global call for 2013. You missed that? Aug14 Buying Green Product... visualized by: eLocal.com Comparing green products with their outdated counterparts. Jul04 Rare Earth Metals industry visualized by: Buckyballs They sound valuable due to scarcity but that’s not truth.

Explorable Explanations Bret Victor / March 10, 2011 What does it mean to be an active reader? An active reader asks questions, considers alternatives, questions assumptions, and even questions the trustworthiness of the author. Do our reading environments encourage active reading? Explorable Explanations is my umbrella project for ideas that enable and encourage truly active reading. This essay presents examples of few initial ideas: A reactive document allows the reader to play with the author's assumptions and analyses, and see the consquences. An explorable example makes the abstract concrete, and allows the reader to develop an intuition for how a system works. Contextual information allows the reader to learn related material just-in-time, and cross-check the author's claims. As always, if any of this inspires you to play around with these concepts, I'd love to see what you come up with. 1. Ten Brighter Ideas was my early prototype of a reactive document. Here is a more simplistic example of the same concept.

Currying Motivation[edit] Currying is similar to the process of calculating a function of multiple variables for some given values on paper. For example, given the function f(x,y) = y / x: To evaluate f(2,3), first replace x with 2. Since the result is a function of y, this function g(y) can be defined as g(y) = f(2,y) = y/2. Next, replace the y argument with 3, producing g(3) = f(2,3) = 3/2. On paper, using classical notation, this is usually done all in one step. If we let f be a function then the function h where is a curried version of . is the curried equivalent of the example above. Definition[edit] Given a function f of type , currying it makes a function . takes an argument of type and returns a function of type . The → operator is often considered right-associative, so the curried function type is often written as . is equivalent to Mathematical view[edit] In a set-theoretic paradigm, currying is the natural correspondence between the set of functions from to , and the set to the set of functions from . . .

Hyperakt Jun 28, 2012 | Data Viz , Web The web today is a growing universe of interlinked web pages and web apps, teeming with videos, photos, and interactive content. What the average user doesn't see is the interplay of web technologies and browsers that makes all this possible. Over time web technologies have evolved to give web developers the ability to create new generations of useful and immersive web experiences. Today's web is a result of the ongoing efforts of an open web community that helps define these web technologies, like HTML5, CSS3 and WebGL and ensure that they're supported in all web browsers. The color bands in this visualization represent the interaction between web technologies and browsers, which power the web apps that we use daily. Hyperakt's role in the project included research and design of the visualization, in collaboration with members of the Google Chrome team. Services Provided Data Viz Infographics Web Web Design Related News Best Site of the Day from FWA Credits Read Bio

Up and Down the Ladder of Abstraction In real life, you would never use a ladder that only let you go up. Likewise, when creating abstractions, stepping down is as important as stepping up. Here, we take the abstraction from the previous section, and overlay a concrete representation on top of it. That is, we draw the trajectory that represents all time, but we also draw the car at some particular time. How do we select which particular time to show? We could use the slider, which has reappeared. This is a general and powerful technique. Try cranking up the turning rate to 8° or so, and then inspecting the car's behavior as it makes its first two turns. In this case, it's fairly easy to look at the trajectory and imagine the car moving along.

DataFerrett_dot_census_dot_gov the future of money A tide of technology — cryptocurrencies, P2P economies, payment APIs — is reshaping the world before our very eyes. We rarely memorize, wait in line, rewind, unfold, print or phone anymore. There has never been a better time to map the phenomenon of human innovation, and there is no better place to start with than with money. Yes, money is a technology. From beads to gold, it has changed shape, and from changing hands to routing data, its transfer has accelerated, expanded & multiplied. The internet has unlocked vast networks, new behaviors and inventive systems that are redefining the concept of value. Envisioning has created a free PDF briefing explaining our unique perspective of technological disintermediation applied to money. Scan our free briefing to understand how technology is a fundamental force shaping industries, economies and humanity.