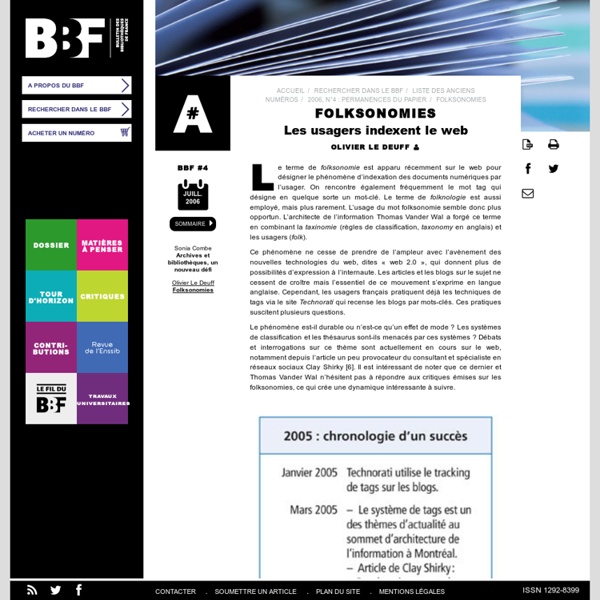 Face Research ⇒ Demos ⇒ Transform an Image Drag the images to the blank faces and click on the button to see the “image to transform” transformed by some percentage of the difference between the “transform dimension” images. Examples: Settings Image Display Height: 200px Shape Transformation: % Colour Transformation: % Shape: to % Colour: to % Frames: Speed: Source Images Individuals Age Averages Ethnicity Averages Tag Literacy Introduction: Part of the allure of classifying things by assigning tags to them is that the user can give free reign to sloppiness. There is no authority —human or computational— passing judgment on the appropriateness or validity of tags, because tags have to make sense first and foremost to the individual who assigns and uses them. And yet, the whole point of distributed classification systems (DCSs) such as del.icio.us and flickr is that the aggregation of inherently private goods (tags and what they describe) has public value: When people use the same tag to point to different resources they are organizing knowledge in a manner, commonly referred to as a folksonomy, that makes sense to them and to others like them. We can say, then, that DCSs function at the intersection of individual choices and the shared linguistic/semantic norms of a social group (the folks in folksonomy). In this paper, I explore two aspects of this intersection.

The Cost of Reading in Prison: In West Virginia it's 5 cents a minute It is hard to fathom how they got here but the West Virginia Division of Corrections and Rehabilitation is charging inmates to read! As part of their contract with a private company inmates are provided “free” tablets in which they can access Project Gutenberg, an emporium of free, public domain texts. Sounds great right?

Top 10 Best HTML5 Websites of 2014 Here are our editor's picks for the Top 10 Best HTML5 Websites of 2016 based on visual artistry, integrated sound, ease of use, and uniqueness. 1 | The Wilderness Downtown The Wilderness Downtown is an interactive music video for Arcade Fire's song ''We Used to Wait''. Visitors are asked to input the address of the home they grew up in and then the site uses Google Earth and HTML5 to create a personalized music video that takes the user on a journey back home. 2 | Heart of The Artic Heart of The Arctic takes users on an Arctic expedition/scavenger hunt through four distinct environments designed to show users the steps that would be needed to restore climate balance to the arctic region. This site perfectly showcases how Html5 can be used to create fun and educational websites. 3 | Three Dreams of Black 3 Dreams of Black uses HTML5 to promote Danger Mouse and Daniele Luppi's album Rome.

Ranganathan Killed the Library Theorist I have been thinking a lot about the philosophical underpinnings of librarianship lately and recently reread Andre Cossette’s essay: Humanism and Libraries: An Essay on the Philosophy of Librarianship, (1976) which was recently translated from French by Rory Litwin, and is available from Litwin’s Library Juice Press. This essay illustrates the lack of philosophical and theoretical thinking in librarianship that has been troubling me as of late, and lays out a “philosophy of librarianship” grounded in the humanist/realist schools of thought that I feel could bring about a renaissance to our profession and pull us out of the malaise that we are currently mired in professionally. I’ll write more about this in a later post, but I want to focus for a moment on why we are currently in this state in the profession. There is no doubt that S. R. Ranganathan is one of the greats in the field of library science and in the profession of librarianship.

Top 10 Best Flash Websites of 2014 Here are our editor's picks for the Top 10 Best Flash Websites of 2017 based on visual artistry, integrated sound, ease of use, and uniqueness. 1 | Pharrell Williams - Happy Pharrell Williams has employed Flash and his creative style to create the world's first 24 hour music video. More importantly he uses the full complement of Flash media integration to create a web experience that fully conveys the song's theme in a way that a traditional video could not. 2 | Clouds Over Cuba This interactive multimedia documentary uses the immersive nature of Flash to allow the audience to relive the Cuban Missile Crisis 50 years later and discover what might have been. Produced by the JFK Library this chilling website entertains and teaches. The mobile synching and dossier are a great touch.

Application of Ranganathan&#039;s Laws to the Web: the Five Laws of the Web Alireza Noruzi Department of Information Science, University of Paul Cezanne, Marseille, France Received November 5, 2004; Accepted December 3, 2004 Abstract This paper analyzes the Web and raises a significant question: "Does the Web save the time of the users?" This question is analyzed in the context of Five Laws of the Web. Hashtags Hashtags Introduction Hashtags are a community-driven convention for adding additional context and metadata to your tweets. They're like tags on Flickr, only added inline to your post. You create a hashtag simply by prefixing a word with a hash symbol: #hashtag. Hashtags were developed as a means to create "groupings" on Twitter, without having to change the basic service.