The Ultimate Guide to Time-Lapse Photography 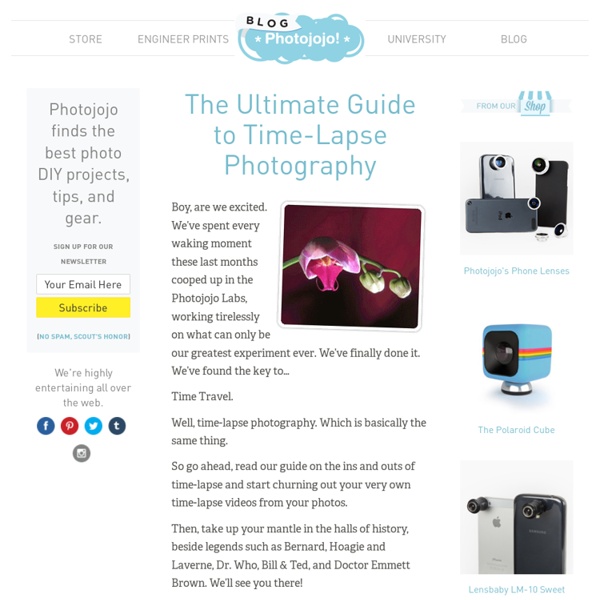 Boy, are we excited. We’ve spent every waking moment these last months cooped up in the Photojojo Labs, working tirelessly on what can only be our greatest experiment ever. We’ve finally done it. Time Travel. Well, time-lapse photography. So go ahead, read our guide on the ins and outs of time-lapse and start churning out your very own time-lapse videos from your photos. Then, take up your mantle in the halls of history, beside legends such as Bernard, Hoagie and Laverne, Dr. p.s. Time Lapse 101: An Overview Alright, so it’s not time-travel. Time-lapse lets you see the natural progression of time, while not having to wait through the actual length of it… so you could watch the sunset (at least, yesterday’s sunset) as you always wanted to, without staying up late to do so â€“ and you could fit it all within a nice, brief commercial break in-between episodes of “Dr. Here’s an example of a time-lapse we put together just for you: Music by Loena Naess, who is awesome. Which is better? Awesome.

Tutorial: How to create a HDR time lapse In the last few years, HDR (High Dynamic Range) photography evolved to a serious photography technique. Here an example which is slightly over the top, which I made in 2006 from the telescope I write my phd thesis about. HDR gone bad: and another one from Agua Azul in Chiapas, Mexico. Once one gets over the initial phase of playing with the settings and going to the crazy settings resulting into the images above, one can achieve great results. Technically, HDR images are taken using the bracketing mode, which is included in all DLSRs and even some compact cameras. For HDR time lapse movie, I first follow the general rules of time lapse photography: Focus to manualManual white balance (I use SRaw1 on the Canon 50D to be able later to change the white balance when developping the raw images. 7.5 MegaPixel is more than enough for time lapses)Manual exposure time and aperture.Furthermore, I use either a neutral density filter or a polariser. Set the frame rate with Video.. That's it!

Magic Lantern Firmware Wiki Magic Lantern Firmware Magic Lantern is a software enhancement that offers increased functionality to the excellent Canon DSLR cameras. We have created an open framework, licensed under GPL, for developing extensions to the official firmware. Magic Lantern is not a "hack", or a modified firmware, it is an independent program that runs alongside Canon's own software. Frequently Asked Questions What is it? Magic Lantern is an enhancement atop of Canon's firmware that frees your Canon DSLR, allowing you to use many useful features. Is it only for video? No. Initially, Magic Lantern was developed by independent filmmakers and tailored for video production on 5D Mark II. Where do I get it? See the Download page. Will it break my camera? As of September 2009 the software has been downloaded over two thousand times and there have been no reports of damage to the cameras. What can I do to help? Where do I report bugs? For general tech-support, join the forum. Why not just buy a video camera?

"deshake" a time lapse sequence taken in windy conditions In Barcelona I shot some time lapses in very windy weather and I only had the gorilla pod as a tripod with me. The result makes you seasick when watching.Here is a still from that sequence: Luckily, there is photoshop with its great "auto align" function. This will nicely deshake the movie. To use it, proceed the following way:First load all the images as a stack into layers (File... Scripts... Then use Selection... The auto alignment dialog is opened with Edit... With the selection of Auto: and clicking on "ok", the alignement procedure starts. When it has finished, you can save the single layers again into seperate images with File... Then choose a folder and an image format. Here is the result of the raw and the deshake barcelona movie: www.magictimelapse.ch

Release notes What are nightly builds? - Nightly builds are binaries compiled daily from the latest source code, by an automatic program - BuildBot. Who should use nightly builds? - Anyone who likes to live on the bleeding edge, wants to help ML development, and doesn't care about some features being broken. Why should I use a nightly build? - To try the latest features (e.g. you have requested a feature and it was implemented). - To check if a bug was fixed. - To help us with testing (please report any bugs you find). What are the disadvantages of nightly builds? - You are running untested code. - No documentation - the only help for new features is a small line of text, and ML source code. - No guarantees - if it breaks, you get to keep both pieces. What's new? - See the ChangeLog. - Browse the changeset log on Bitbucket. - Look for feature requests marked as "DONE". - The list of changes is huge - if you want a nice summary, you need to wait for the next stable release. Will it work on my camera?

Pans and Zooms with Adobe Premiere (Elements) People (like me) whose photo equipement is already heavy enough, do not want to carry a Meade mount or something similar in remote places. Still, pans look great in time lapse sequences.To some amount, these pans and even zooms can be done in post production, what I will explain here with Adobe Premiere Elements.To save some memory on the memory card, I usually shoot in sRaw1, with 7.5MegaPixels (3272x2178). The final movie should be HD (1080p, that means 1920 x 1080 pixels), what leaves lots of space for pans and zooms, as illustrated below: The window denotes the HD window, which can be moved to create the panning effect. Then open the "Movement" menu and click on the "show keyframes" symbol: Then click on the little watch ("show/hide animations"). Then move the red line in the effects timeline to the right end.

Time Lapse Tutorial – Human Planet | Photos by Timothy Allen Tips and techniques One lump or two? Update: If you have questions about time lapse please contact me via my new Facebook page or join a photography workshop HERE. Time lapse photography can be a lovely way to spend a quiet afternoon somewhere. Whilst others might go fishing, I prefer settling down with a flask of tea and my tripod, giving myself the time to really appreciate the environment I find myself in. Time lapse is an important part of my work on Human Planet. Before we start, it would be good to see an example of a time lapse film. (You must forgive me for adding the music – it seemed apt) OK, so it’s badly exposed and poorly composed, but it is nevertheless a time lapse film. Equipment Firstly, you need a camera. Using an ND 3.0 filter, in Spain I was able to shoot a 1 minute exposure in bright sunlight at f22 Starting out OK, now onto the practical side of things. Interval Put simply, the shorter the interval between each frame, the more slowly the action will move in your film. 1.

Remove dust spots with Adobe After Effects It's been a while since I wrote a tutorial how to remove dust spots with Photoshop, see here: . Now if you have After Effects (I use AE CS4), you can skip this photoshop step and do it directly in After Effects.Shooting on Sahara's dunes in Morocco's desert, I caught a large amount of sand grains in my camera (without actually changing the lense at any time, the sand just came in...), so I had to find an efficient way to remove the resulting dust spots...Being an Adobe product, After Effects comes with a few filters that are also included in Photoshop, luckily also with the Dust & Scratches filter. As in Photoshop, you do not want to apply the filter to the whole frame, but only where the dust spots are. To do so, in AE one uses Masks:First import your images into a new composition. You have now two layers. using this tool, mark all dust spots in your image: