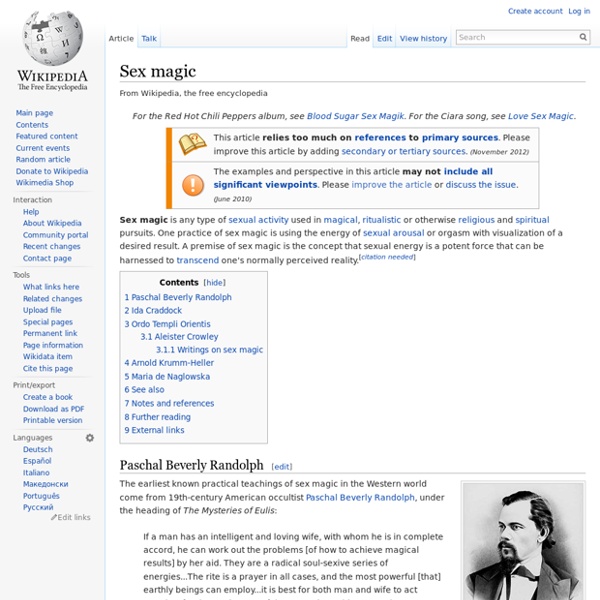 Paschal Beverly Randolph[edit] The earliest known practical teachings of sex magic in the Western world come from 19th-century American occultist Paschal Beverly Randolph, under the heading of The Mysteries of Eulis: If a man has an intelligent and loving wife, with whom he is in complete accord, he can work out the problems [of how to achieve magical results] by her aid. They are a radical soul-sexive series of energies...The rite is a prayer in all cases, and the most powerful [that] earthly beings can employ...it is best for both man and wife to act together for the attainment of the mysterious objects sought. Success in any case requires the adjuvancy of a superior woman. THIS IS THE LAW! The entire mystery can be given in very few words, and they are: An upper room; absolute personal, mental, and moral cleanliness both of the man and wife. Randolph himself was greatly influenced by the work of English Rosicrucian and scholar of phallicism, Hargrave Jennings. Ida Craddock[edit]

Extraterrestrial life The official U.S. government position on extraterrestrial life and the three major efforts to search for it. Clockwise from top left: The development and testing of hypotheses on extraterrestrial life is known as "exobiology" or "astrobiology", although astrobiology also considers Earth-based life in its astronomical context. A bad witch's blog: P Clairvoyant reading is one of the most difficult psychic talents to master, although a traditional witch would certainly have been expected to possess the gift of second sight. Using a crystal ball, scrying bowl or simply closing her eyes and tuning in to the unseen realm of the spirits, the wise woman of old would have been able to help people find what they were looking for, including lost objects, missing cats or even errant husbands. Nowadays, people are more likely to visit a psychic medium than a witch when they want a clairvoyant reading, but I think it is still a skill anyone training in the craft should try to master. Clairvoyance is the power to see events, people, places or objects that could not be perceived by normal senses. Technically, it is different from clairaudience, which is hearing sounds by psychic means, clairsentience, which is gaining insights from touching people or objects, and mind reading, which is the ability to pick up others’ thoughts.

Mythologies Coyote and Opossum appear in the stories of a number of tribes. The mythologies of the indigenous peoples of North America comprise many bodies of traditional narratives associated with religion from a mythographical perspective. Indigenous North American belief systems include many sacred narratives. Such spiritual stories are deeply based in Nature and are rich with the symbolism of seasons, weather, plants, animals, earth, water, sky and fire. Out Of This World: The Mysterious Mental Side Effects Of Traveling Into Space At first they thought it was asthma. The fighter squadron's 37-year-old commander suddenly started refusing to fly at high altitudes because of mysterious breathing problems. He also struggled to control feelings of wrath toward his coworkers, and that made him hyperventilate. It was only later that the commander would tell a Navy psychologist what really triggered him: That while flying at the edge of the troposphere, “a frightening feeling of detachment” set in. There, in the halo of thin silence surrounding the earth in 1956, he didn’t trust his own mind not to self-destruct. The atmosphere gets threadbare above 45,000 feet.

The Return of the Elder Race & Opening the Gateway of the Fifth Kingdom Nefertiti, reportedly ‘a princess from a foreign country’ became married to Akhenaton. By VICTORIA LEPAGE René Guénon’s assertion, culled from ancient esoteric sources, that in the remote past humanity’s first civilisation arose in the ice-free Arctic zone is not without geological support. According to the well-known researcher J.S. Gordon, “there is no scientific doubt that the polar ice caps have melted and reformed many, many times over and that this has always affected human society (plus animal and plant species), often catastrophically.”1 He points out that the great Ice Age that lasted about two million years, ending about twelve thousand years ago, was made up of thirty or so minor Ice Ages, with warm intervals of polar deglaciation in between them, each creating periods of thousands of years of temperate conditions at the poles.

Learn to Fight Capitalism at the School of Disobedience Jani Leinonen, “School of Disobedience” (2015) (courtesy the artist) A forthcoming exhibition in Helsinki will offer visitors an education grounded in disobedience and protest, equipping them with tools and ideas to challenge society’s injustices and fight for change. The School of Disobedience, which opens on September 4 at Finland’s contemporary art museum, Kiasma, is part art show, part educational institution: visitors to the museum are treated as students, receiving lessons from the more than 100 works on view or through a series of workshops with curricula that encourage civil disobedience through different media. Conceived by Finnish artist Jani Leinonen, whose own work is very critical of capitalist systems, the school intends to instill in the public — particularly young people — an urgent desire for social justice.

Apple, Microsoft, IBM slammed for CISA support © Time Inc. All rights reserved. Fortune.com is a part of the Time.com network of sites. 10 Signs You Have Found Your Soulmate “Your soul mate makes you feel entirely intact, like no piece is missing from the puzzle. A life partner, on the other hand, can be a great supporter and long-time companion, but is limited in his or her capacity to enrich your spirit.” ~ Dr. Carmen Harra Soul Mates. Banksy’s New Apocalyptic Theme Park Is Designed to Disappoint A glitchy Ariel is one of the Banksy works that will greet crowds to Dismaland. (all images courtesy Christopher Jobson of Colossal) Today, it was officially announced that British artist Banksy has constructed a dystopian riff on Disneyland in a derelict seaside resort in Weston-super-Mare, England. Called Dismaland, the ambitious five-week project is sure to attract visitors eager for the artist’s brand of viral culture jamming and populist humor, but there’s a twist. Most of the art on display at Dismaland is not by Banksy — though he has contributed 10 new works — but by 58 artists invited to participate, including blue-chip names Damien Hirst, Jenny Holzer, and David Shrigley, and popular artists associated with street art like Espo, Escif, Bäst, and El Teneen.