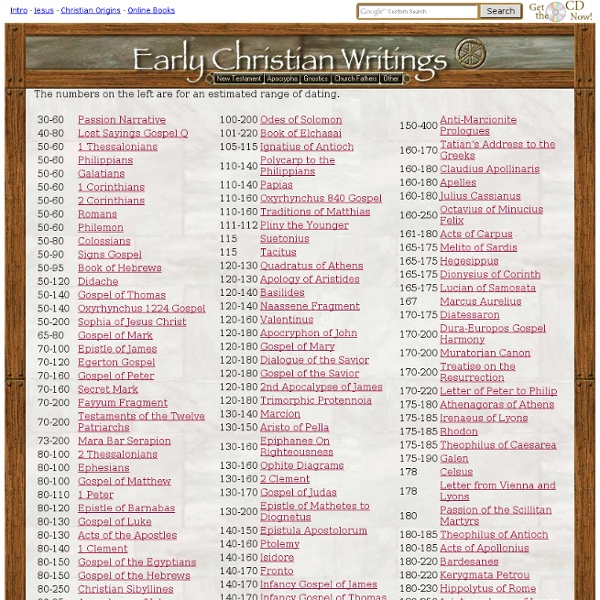 Special Features Please bookmark the site for future reference. Let your friends know about the site too. New Testament — Apocrypha — Gnostics — Church Fathers — Other Early Christian Writings is the most complete collection of Christian texts before the Council of Nicaea in 325 AD. The site provides translations and commentary for these sources, including the New Testament, Apocrypha, Gnostics, Church Fathers, and some non-Christian references.

NET Bible 1 tn The Hebrew text has the article prefixed to the noun. Here the article indicates the generic use of the word אָדָם (’adam): “humankind.” 2 tn This disjunctive clause (conjunction + subject + verb) is circumstantial to the initial temporal clause. It could be rendered, “with daughters being born to them.” For another example of such a disjunctive clause following the construction וַיְהִיכִּי (vayÿhiki, “and it came to pass when”), see 2 Sam 7:1. What does the Bible say about an out of body experience / astral projection? Question: "What does the Bible say about an out of body experience / astral projection?" Answer: Information about the "out-of-body” experience is both vast and subjective. According to Wikipedia, one out of ten people claims to have had an out-of-body experience (OBE), and there are many different types of the experiences claimed. They range from involuntary out-of-body experiences or near-death experiences that happen after or during a trauma or accident, to what is called “astral projection" in which a person voluntarily tries to leave his/her body behind and ascend to a spiritual plane where he/she believes he/she will find truth and clarity.

Historical Jesus Theories The purpose of this web page is to explain and explore some of the theories offered up by contemporary scholars on the historical Jesus and the origins of the Christian religion. Issues include the nature of the historical Jesus, the nature of the early Christian documents, and the origins of the Christian faith in a risen Jesus Christ. An attempt has been made to include historical Jesus theories across the spectrum from Marcus Borg to N.T. Wright and to describe these historical Jesus theories in an accurate and concise way. Grimoar - Occult Texts Welcome to our library Welcome in our occult texts library. It contains 2052 unrevised texts in pdf, doc and other formats. Librarians are responsible neither for text redaction nor for their contents. It is possible that some of the texts are still under copyright. If you are not sure you act in accordance with your local law, please do not download anything.

Ten Mysterious Undeciphered Codes and Inscriptions From Neolithic tablets containing the oldest known system of writing, to a series of letters scrawled on the back of a dead man’s book, some of the most legendary undeciphered codes and texts remain a challenge for even the world’s best cryptographers, code breakers, and linguists. Yet unravelling these mysterious puzzles remains as important as ever, since many of these enigmatic inscriptions could hold the keys to understanding civilizations that have long since faded into the pages of history. Here we feature ten of the most fascinating undeciphered codes and inscriptions throughout history. The enigma of the Shugborough Inscription

Complete Jewish Bible The Complete Jewish Bible is the only English version of the Bible fully Jewish in style and presentation that includes both the Tanakh ("Old Testament") and the B'rit Hadashah (New Covenant, "New Testament"). Even its title, the Complete Jewish Bible, challenges both Jews and Christians to see that the whole Bible is Jewish, the B'rit Hadashah as well as the Tanakh. Jews are challenged by the implication that without it the Tanakh is an incomplete Bible. Gospel of Luke The Gospel According to Luke (Greek: Τὸ κατὰ Λουκᾶν εὐαγγέλιον, to kata Loukan euangelion), commonly shortened to the Gospel of Luke or simply Luke, is the third and longest of the four Gospels. This synoptic gospel is an account of the life and ministry of Jesus of Nazareth. It details his story from the events of his birth to his Ascension.

Rare Metaphysical Books - The VOICE OF ISIS pages 1-13 'The Path' and pages 14-19 'Meaning of the Symbol' Voice of Isis - by the Order of Christian Mystics - 1926 Voice of ISIS: CHAPTER XXXIV. The Meaning of the Symbol The Murder of Mary Magdalene and the Hidden Encryption in Art The Murder of Mary Magdalene and the Hidden Encryption in Art by Dan Green The mysterious biblical figure of Mary Magdalene received a high profile boost to the uninitiated courtesy of Dan Brown’s blockbuster ‘The Da Vinci Code’, elevating her status even higher than when in 1969 the Catholic Church decided to pronounce her a Saint – quite an improvement from their previous character assassination that had assured her image for the previous centuries as being that of a harlot. In Brown’s book and movie Mary was the partner of the biblical Jesus and bore him a child, Sarah, thus the dawning of a royal bloodline.

Hebraic Christian Free Resources! If you're just beginning your search for the Hebraic foundations of your Christian faith or if you're a long-time student, HCGC has many free resources for you. Click "Free!" on the bar above to access the following: Gospel of Mark The Gospel According to Mark (Greek: τὸ κατὰ Μᾶρκον εὐαγγέλιον, to kata Markon euangelion), the second book of the New Testament, is one of the four canonical gospels and the three synoptic gospels. It was traditionally thought to be an epitome (summary) of Matthew, which accounts for its place as the second gospel in the Bible, but most contemporary scholars now regard it as the earliest of the gospels. Most modern scholars reject the tradition which ascribes it to Mark the Evangelist, the companion of Peter, and regard it as the work of an unknown author working with various sources including collections of miracle stories, controversy stories, parables, and a passion narrative. Composition and setting[edit]

A Nazarene Looks at the Book of Mormon Part 1 - Nazarene Space By James Scott Trimm The Book of Mormon makes a major mistake from a Nazarene standpoint. The Book of Mormon does not represent the teachings of the Bible, but instead presents the teachings Protestant Christians have BELIEVED are in the Bible. A complete version of The Gospel of Mary Magdalene - National Gnosticism & Heretical Spirituality Mary Magdalene has perennially intrigued western culture, yet her interest has peaked in the last generation because of the parallel interest in the Gnostic Gospels. No longer just a redeemed sinner or sensuous projection for artists, Gnosticism revealed a Mary Magdalene who was a spiritual visionary, a religious leader, and perhaps the main disciple of the risen Christ. In the Nag Hammadi library’s Dialogue with of Savior, she is proclaimed as “the woman who understood The All.” The most popular narration of Mary Magdalene today is the Gospel of Mary (even though its discovery is well over a century old). In this scripture, Mary shares in a mystic vision with Jesus concerning the infinite domains. She moreover comforts and leads the other apostles, although not without conflict.