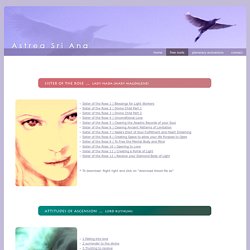 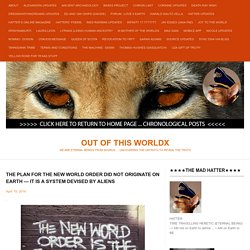 This system is now being pushed for implementation on Earth by the Anunnaki Remnants who remain on Earth. The Anunnaki Remnants are the ones that were left behind on Earth by the Anunnaki Elite when they escaped this world. The New World Order is based upon the premise that there is to be a supreme commander who oversees the affairs of the world. During transition into a global government smaller and weaker nations are being forced or lured into accepting self-appointed stronger nations to act as their police force. Later, the police force will expand and become an international police force under a single master. The New World Order is a One World Order with a hidden agenda to rule by fear, control, exploitation and bullying.

Hitler, Churchill and Stalin. The Sumerian Tablets Contain Our Entire Biblical Stories, with These Amazing Differences and Some Other Facts You Really Need to Hear. (Before It's News) An Exclusive You Have To See: The Last Frontier of Free Press Is Here! 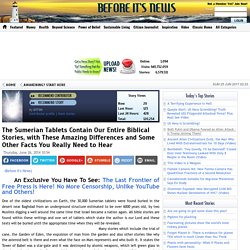 No More Censorship, Unlike YouTube and Others! One of the oldest civilizations on Earth, the 30,000 Sumerian tablets were found buried in the desert near Baghdad from an underground structure estimated to be over 6000 years old, by two Muslims digging a well around the same time that Israel became a nation again. All bible stories are found within these writings and one set of tablets which state the author is our Lord and these texts will be buried until the appropriate time when they will be revealed. Updated: An Analysis of the Recently Leaked Sumerian Tablets Concerning Our Origins - Paranormal News. Around June 12 of 2006, the 260th Quartermaster Battalion providing Petroleum Support Surveillance around Talil Air Force Base southeast of Baghdad uncovered a copper box containing a set of lapis lazuli tablets with Sumerian cuneiform embedded from within its layers. 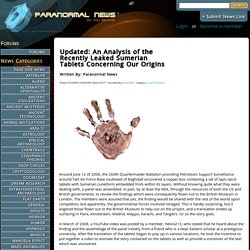 Without knowing quite what they were dealing with, a panel was assembled, in part, by at least the NSA, through the resources of both the US and British governments, to review the findings which were consequently flown out to the British Museum in London. The members were assured that yes, the finding would be shared with the rest of the world upon completion, but apparently, the governmental forces involved reneged. This is hardly surprising, but it angered those flown out to the British Museum to help out on the project, and a translation ended up surfacing in Paris, Amsterdam, Madrid, Aleppo, Karachi, and Tangiers. The Sumerian Tablets Contain Our Entire Biblical Stories, with These Amazing Differences and Some Other Facts You Really Need to Hear. Updated: An Analysis of the Recently Leaked Sumerian Tablets Concerning Our Origins - Paranormal News. 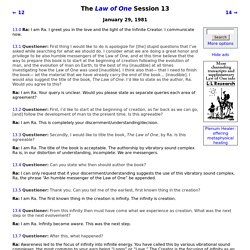 I greet you in the love and the light of the Infinite Creator. I communicate now. 13.1 Questioner: First thing I would like to do is apologize for [the] stupid questions that I’ve asked while searching for what we should do. I consider what we are doing a great honor and privilege to be also humble messengers of the Law of One, and at this time believe that the way to prepare this book is to start at the beginning of creation following the evolution of man, and the evolution of man on Earth, to the best of my [inaudible] at all times investigating how the Law of One was used [inaudible].

Ra: I am Ra. 13.2 Questioner: First, I’d like to start at the beginning of creation, as far back as we can go, [and] follow the development of man to the present time. Ra: I am Ra. 13.3 Questioner: Secondly, I would like to title the book, The Law of One, by Ra. Ra: I am Ra. 13.4 Questioner: Can you state who then should author the book? 13.5 Questioner: Thank you. BLEND OF LOVING ENERGIES Home Page. National marijuana news, culture and information. Planetary Activation Organization.