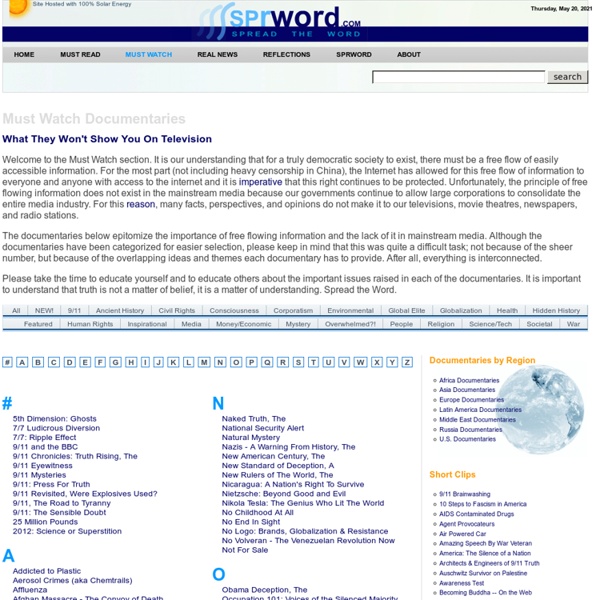 Welcome to the Must Watch section. It is our understanding that for a truly democratic society to exist, there must be a free flow of easily accessible information. For the most part (not including heavy censorship in China), the Internet has allowed for this free flow of information to everyone and anyone with access to the internet and it is imperative that this right continues to be protected. Unfortunately, the principle of free flowing information does not exist in the mainstream media because our governments continue to allow large corporations to consolidate the entire media industry. For this reason, many facts, perspectives, and opinions do not make it to our televisions, movie theatres, newspapers, and radio stations. The documentaries below epitomize the importance of free flowing information and the lack of it in mainstream media. Please take the time to educate yourself and to educate others about the important issues raised in each of the documentaries.

Are you an Empath? The chances are if you’ve happened across this blog after typing the words: ‘traits of an Empath’ into any search engine, you will very likely be an Empath. As soon as you heard and read of the traits of an ‘Empath’, you knew that it was describing you and, with the discovery of a title for your condition, this probably came with a huge sigh of relief… Finally, you can piece it all together, you have an understanding as to why you’ve felt the way you do with certain people and in certain places, why you know things you shouldn’t and seem to experience more emotional and physical pain than others. Empaths are an inquisitive bunch and just love to learn or get confirmation on our ‘suspicions’, ‘hunches’, or feelings. So, hopefully the info below will give you a few more ‘aha’ moments in your quest for self discovery. 30 Empath Traits by Just Be: 1.

Frontview's - StumbleUpon 9/11 Truth movement are idea’s that disagree with the widely accepted account that the September 11 attacks were perpetrated solely by al-Qaeda, without any detailed advanced knowledge on the part of any government agency. Proponents of these theories claim there are inconsistencies in the official conclusions, or evidence which was overlooked. In a 2008 global poll of 16,063 people in 17 countries, majorities in only nine countries believe al Qaeda was behind the attacks. 46% of those surveyed believed al-Qaeda was responsible for the attacks, 15% believed the U.S. government was responsible, 7% believed Israel was and another 7% believed some other perpetrator, other than al Qaeda, was responsible. The poll found that respondents in the Middle East were especially likely to name a perpetrator other than al-Qaeda. In Memory The Speech

Top 10 Shocking Documentaries Movies and TV As a visual medium, documentaries frequently succeed in portraying the unimaginable far better then any book alone could do. Beaming everything from the consequences of child abuse to the horrors of nuclear warfare into the homes of millions, the following infamous documentaries shock the viewer and challenge perceptions. Please note: Almost all the videos featured contain graphic and disturbing content, relevant to the topic at hand. Warning: some of these documentaries contain disturbing footage. 10 Mind-Blowing Theories That Will Change Your Perception of the World Reality is not as obvious and simple as we like to think. Some of the things that we accept as true at face value are notoriously wrong. Scientists and philosophers have made every effort to change our common perceptions of it. The 10 examples below will show you what I mean. 1.

14 Wild Ideas Many Worlds , Medicine Useless , A.I. via Common Sense , Cryonics , Uploads , I'm in Sim , Fast Growth , Growth Stops , Colonize Galaxy , No Aliens , Aliens Came & Left , Private Law , Futarchy , No One Honest . by Robin Hanson , Oct. 18, 2001 A wild idea is one that many people think is obviously quite unlikely. I'd say at least a third of these wild ideas are likely true. (Parenthetic links are to more of my writings .) Many times each day, your mind permanently splits into different versions that live in different worlds.

25 Documentaries Everybody Should Watch Sans Soleil This is not your average documentary. It is a fleeting memory, a sudden remembrance of times long past, a meditation on time and culture, a touch of an emotional diary. We follow the eyes of a world traveller who makes sharp observations and tries to convey them to his friend. We never learn who they are and where they came from, and this is perhaps a subtle point the documentary wants to make. The narrator’s voice switches from Japanese to German to English to French, thereby embodying the language of the places visited. 25 Things You Keep In Your Life That Are Only Holding You Back 1. The phone numbers of people that never, ever call you or text you first, and often don’t even respond when you text them. 2. Mean or uncomfortable exchanges with people — either in your text or internet history — that you occasionally go over and re-read because they make you feel angry and terrible all over again. 3. Subscriptions to online stores that you can’t afford, and which send you tons of emails and texts about the sales you should not be spending money on.

10 More Mysterious Conspiracy Theories Mysteries To date we have around seven conspiracy theory lists or lists containing entries related to such. This new list is a welcome addition as it has been some time since our last one and they are always extremely fascinating topics to read about. Echorenovate Introducing Residential Wind Turbines The two main types of wind turbine are Vertical axis (VAWT) and Horizontal axis wind turbines (HAWT). Vertical axis wind turbines are beautiful pieces of architecture, but at present are more like revolving sculptures, as opposed to the more efficient horizontal axis wind turbines. - See Green Favourites section, and explore the Sustainability Forum links for further information. The swept area of a VAWT is minimal compared to a HAWT, and yet the BETZ limit (limit of energy possible from a wind turbine) is continually ignored by bogus VAWT companies, who may not be clear about the real energy data. So, no surprise then that we have opted for HAWT.

Glass door with a surprise - StumbleUpon Posted on November 23, 2010 in Bizarre Rate this Post (1 votes, average: 4.00 out of 5) FuturEnergy - 1 kw Upwind Turbine Our 'rugged' Horizontal Axis Wind Turbine range first came to market in Spring 2005. Since then we have supplied over 5000 systems, all over the world. The specially developed Permanent Magnet Generator, straight tailfin with manual stop switch, and our three-blade (1.75 meter) configuration, enable our turbines to create very useful power in low wind conditions, and over 1000W in winds of 12.5m/s. Available in 12V (600w), 24V & 48V versions, they are suitable for battery charging, water/air heating and Grid-Tied/Mains installations. We stock and supply the components to build a complete system for any application.