I-Docs a new future for Documentary

I have recently completed a Masters at Dublin Institute of Technology (DIT), Ireland doing an MSc in Creative Digital Media.

The programme gives me an opportunity to explore and specialise in production techniques dedicated to the wider creative digital media industry. 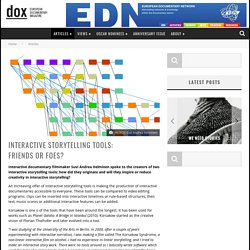 An increasing offer of interactive storytelling tools is making the production of interactive documentaries accessible to everyone. These tools can be compared to video editing programs: clips can be inserted into interactive timelines or rule-based structures, then text, music scores or additional interactive features can be added. Korsakow is one o of the tools that have been around the longest. It has been used for works such as Planet Galata: A Bridge in Istanbul (2010). Korsakow started as the creative vision of Florian Thalhofer and later evolved into a tool. “I was studying at the University of the Arts in Berlin. As with Korsakow, the origin of the tool ASAPS started with one person’s need for it. It was like mounting the horse backwardsFlorian Thalhofer “No! I-doc sourcebook. So why the pivot (i.e. a dramatic change in direction) to FilmKode.com? 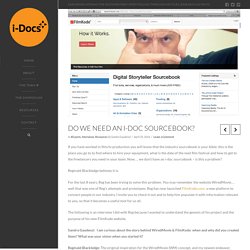 In retrospect, I think WM was trying to solve too many problems, and ultimately, problems emergent filmmakers weren’t willing [or didn’t need] to pay someone to solve. So, I returned to square one equipped with a new perspective, but this time, rather than trying to solve multiple problems, the aim would be to identify and focus on a specific problem. During the ideation process, I came up with several potential ideas, but one stood out among the others: something very basic, yet affecting everyone working with i-docs, virtual reality, and emergent [interactive] filmmaking production. What was it? The lack of a production “sourcebook”. Why is this a problem? Reflecting on my time at university, every film student had a production sourcebook (sometimes called a “production guide” or “guidebook”), and this annually updated index was a directory of companies, studios, tools, and services for filmmakers. 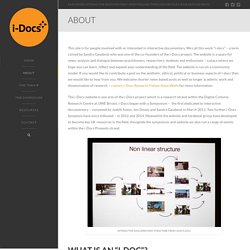 We call this work “i-docs” – a term coined by Sandra Gaudenzi who was one of the co-founders of the i-Docs project. The website is a space for news, analysis and dialogue between practitioners, researchers, students and enthusiasts – a place where we hope you can learn, reflect and expand your understanding of the field. The website is run on a community model. If you would like to contribute a post on the aesthetic, ethical, political or business aspects of i-docs then we would like to hear from you. We welcome shorter news-based posts as well as longer academic work and dissemination of research – contact i-Docs Research Fellow Anna Wiehl for more information. WiREDMOV: Is this the future of interactive documentary? Michael Blackledge: the man behind WiREDMOV Although interactive documentaries are slowly gaining more recognition, their reach is often limited to academic circles, interactive documentary makers, or small communities already engaged with the field. 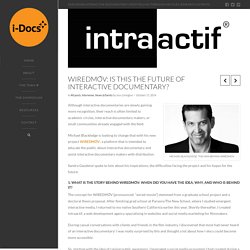 Michael Blackledge is looking to change that with his new project WiREDMŌV; a platform that is intended to educate the public about interactive documentary and assist interactive documentary makers with distribution. Sandra Gaudenzi spoke to him about his inspirations, the difficulties facing the project and his hopes for the future: 1. What is the story behind WiREDMŌV: when did you have the idea, why, and who is behind it? The concept for WiREDMŌV [pronounced: “wired-movie”] stemmed from a graduate school project and a doctoral thesis proposal.

During casual conversations with clients and friends in the film industry, I discovered that most had never heard of an interactive documentary! 2. 3. A direct answer to your question: Absolutely.