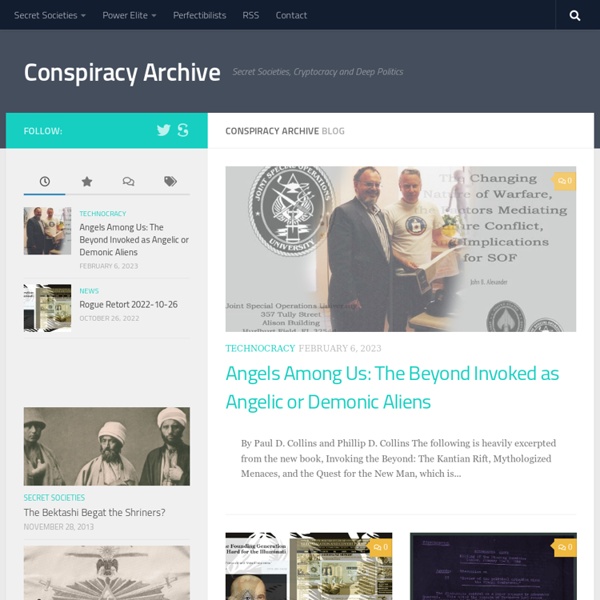 by Terry Melanson ©, Dec. 3rd, 2005 I‘ve recently acquired sixty issues of The New Age Magazine, spanning the years 1968-73. The New Age Magazine was “the official organ of the Supreme Council 33°, Ancient & Accepted Scottish Rite of Freemasonry Southern Jurisdiction.” The magazine was inaugurated in 1904 and still continues today. In 1990, however, the title of the publication was changed to the Scottish Rite Journal—probably in an effort to distance themselves from being identified with the New Age Movement. In any case, the original name for the magazine alludes to those same esoteric yearnings of the socialist utopians and occult theosophists at the turn of the 20th century.

World War III may have already begun: U.S. empire vs. Russia, China and North Korea (NaturalNews) Military historians have said that the world stumbled into World War I, while it ran headlong into World War II. How will World War III begin? It may have started already. A few geopolitical observers think World War III began when the United States and much of the West launched military campaigns against militant Islam. Both President Bush and President Obama have warned the American people that the fight against radical Islam would take years to prosecute. But what of the great powers ostensibly aligned against the West -- Russia, China and, as Sony Pictures Entertainment saw in recent days, North Korea?

& 33 Conspiracy Theories That Turned Out To Be True, What Every Person S... - StumbleUpon New World Order Report January 6, 2010 After reading the article released by Cracked.com, I decided to update and revise their sloppy work. Their article had only 7. I can name 33 and I am planning on releasing a revised list soon with up to 50. Gregorian Bivolaru - Karma Yoga Translation from Romanian: Rodica Harabagiu Final correction of text: NATHA,Copenhagen, 1999 Motto: "In a state of detachment perform what has to be done, no matter what it is, and never wish to assume the fruits of your doings." Karma Yoga represents one of the four main classic forms of Yoga.

JFK Conspiracy Theories by Pat Anders Since November 22 will mark the 30th anniversary of the slaying of John Fitzgerald Kennedy, the nation is only weeks away from a media-sponsored wave of nostalgia that could eclipse even 1987's rerun of the summer of love. The cottage industry that endlessly theorizes about the "truth" behind Kennedy's death will battle the stodgy "Lee Harvey Oswald, acting alone" establishment on a scale not seen since the 1991 release of the controversial film JFK. So what's the big deal? Kennedy's murder is important because it branded the consciousness of the Bill Clinton/Oliver Stone generation so deeply that we can expect it to disappear into the realm of historical trivia only when that generation is itself trundled off to the nursing homes. Everyone loves a mystery.

Iran vs Israel: What The Media Wants You To Forget "The rule of law is simply the rule of bandits who are in control of the United States." -- Eustace Mullins Screening Paid advertising at What Really Happened may not represent the views and opinions of this website and its contributors. Dunning–Kruger effect Cognitive bias about one's own skill The Dunning–Kruger effect is a hypothetical cognitive bias stating that people with low ability at a task overestimate their own ability, and that people with high ability at a task underestimate their own ability. As described by social psychologists David Dunning and Justin Kruger, the bias results from an internal illusion in people of low ability and from an external misperception in people of high ability; that is, "the miscalibration of the incompetent stems from an error about the self, whereas the miscalibration of the highly competent stems from an error about others".[1] It is related to the cognitive bias of illusory superiority and comes from people's inability to recognize their lack of ability. Without the self-awareness of metacognition, people cannot objectively evaluate their level of competence. Original study[edit] Later studies[edit]

CIA and FBI Work with Fascists in Ukraine as ‘War in Europe’ Unfolds ‘Andriy Parubiy, the National Security and Defense Council boss of the junta in Kyiv, announced on Sunday the Ukrainian military will expand the “active stage of the operation in towns where extremists and terrorists are carrying out illegal activities.” The renewed effort to assert control and defeat anti-junta activists and paramilitaries in Donetsk, Sloviansk, Kramatorsk, Kostyantynivk and other towns in eastern Ukraine coincides with news the CIA and FBI will work with the regime to put down popular uprisings against the government in Kyiv. On Monday, coup Interior Minister Arsen Avakov said the failure of police in Odessa, where violence claimed the lives of dozens of people over the last few days, has resulted in the formation of “Kiev-1,” a paramilitary comprised of “civil activists” who previously worked with the fascist Right Sector and Svoboda to overthrow Ukraine’s elected president in February.’ Read more … Odessa carnage adds fuel to pro-Russian fire in Ukraine

War on Terror The War on Terror, also known as the Global War on Terrorism (GWOT) is a term which has been applied to an international military campaign that started after the 11 September 2001 terrorist attacks on the United States. This resulted in an international military campaign to eliminate al-Qaeda and other militant organizations. The United States and many other NATO and non-NATO nations such as Pakistan participate in the conflict.[1] The phrase 'War on Terror' was first used by U.S. President George W. Psi-Tech « In Search of Black Assassins “The salvation of the state is watchfulness in the citizen” –Inscription from the Entrance of a Public Building, Omaha, NE Divine and spiritual human nature spans across ages and civilizations. One of man’s strongest and most powerful loves is one for the children. One of the greatness transgressions and outrages across the planet among humanity is crimes against thy children.