US VS THEM: TV DOCUMENTARY

It's a toff life: why Posh People are all over our television screens - London Life. If you are old country, you take cocaine. 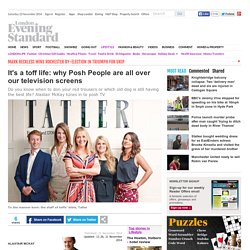 If you’re new country you pickle yourself in sloe gin. If you live in London, you might have a labradoodle. But if you are defiantly old country, you will favour a black labrador that is 500 years old and farts. But beware, because the whippet has overtaken the pug as the chic dog du jour. These insights into the lives of the bewilderingly privileged occur in Posh People: Inside Tatler, a fly-on-the-wall documentary about the fanzine of the fur-gilet-wearing classes. To those of us who have never worried about the correct way to eat a pear, it is startling to discover that it should be done with a spoon. Tatler itself comes across in the documentary as quite a jolly place, staffed by people called Kate who have lovely hair and peachy complexions. But Posh People also shows how social codes are changing. Back on our TV screens after 10 years: the Fulford family Well, maybe. People Like Us: Chelmsley Wood residents braced for backlash over BBC3 show.

Chelmsley Wood residents said they were braced for a backlash ahead of the screening of People Like Us. 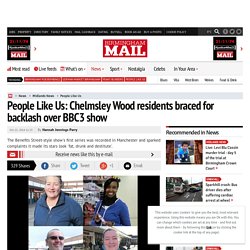 The Benefits Street-style show, filmed on the giant estate, will start on BBC3 next week. The first series was recorded in Manchester and sparked complaints it made its stars look “fat, drunk and destitute”. More than 1,000 people signed a petition calling on BBC Three to cancel the show in the middle of its run two years ago. Watch the trailer for the show here Mary Lodhi, aged 58 and from Solihull, said: “It’s a bit like the whole Benefits Street thing. “They twisted and fixed that to make them look bad and they’re going to make it look like that. “Chelmsley Wood has a bad name anyway. “It’s about time it got some good press but they’re just going to look at the bad.

“It’s just going to be another Benefits Street.” Sue Johnson, a 42 year-old housewife from Chelmsley Wood, turned down an invitation to appear on the show. Immigration Street crew accused of 'inciting racial disharmony' in Southampton. Filming currently underway in Southampton for follow up to Benefits StreetImmigration Street creators heckled during meeting with local residents'We don't want you here': Producers accused of inciting racial disharmonyLove Productions director: 'What we wanted to do was observe and reflect'He said Derby Road has been 'transformed' by immigration in recent years By Corey Charlton Published: 13:32 GMT, 23 July 2014 | Updated: 17:11 GMT, 23 July 2014 Angry residents this week accused TV producers of inciting racial hatred as they met to discuss filming of a documentary on immigration in their road. 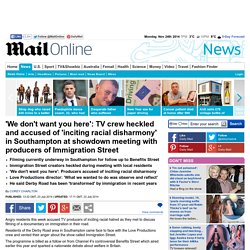 Residents of the Derby Road area in Southampton came face to face with the Love Productions crew and vented their anger about the show called Immigration Street. The programme is billed as a follow on from Channel 4's controversial Benefits Street which aired earlier this year and sparked a nationwide debate about welfare in Britain. Derby Road doesn’t want to be the immigration version of Benefits Street. Derby Road is a fairly normal street in Southampton. 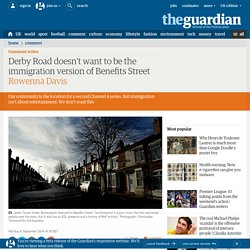 I pass its terraced homes dotted with newsagents and internet cafes on my way into town almost every day. But recently something has changed. Makeshift, photocopied posters have appeared in dozens of windows along the street, pinned up by residents. They simply read: “Go Home Love Productions, No Filming or Photography Here.” It has been chosen as the site for Channel 4’s new series, Immigration Street. The problem is that the community doesn’t want it. If you can’t engage with the community you’re making a series about, you’re in danger of misrepresenting them.

Then there’s the danger of rising community tension. If the programme does get broadcast, without proper ownership from the community, it is in danger of damaging the vulnerable. None of this means that the local community are against a proper debate on immigration, nor do we think that it doesn’t have costs for our country. Sophia Money-Coutts will be starring in TV show Posh People: Inside Tatler.

Sophia Money-Coutts will be starring in TV show Posh People: Inside TatlerHer father Baron Latymer warned her against taking part in reality TVShe has already had a proposal on Twitter thanks to the publicityFilming started at the Tatler office in January and lasted for seven months By Sophia Money-coutts For The Daily Mail Published: 22:29 GMT, 21 November 2014 | Updated: 00:04 GMT, 22 November 2014 At first, I refused to be in Posh People, the forthcoming fly-on-the-wall TV show about Tatler magazine. 'No way,' I told the production company behind it. 'I already have the world's silliest name. 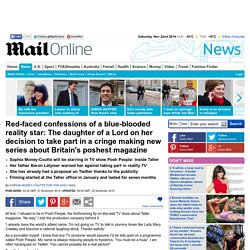 As a journalist myself, I knew that any TV producer would assume I'd be telly gold on a programme called Posh People. Scroll down for video.