Exploring documentary storytelling in the age of the interface 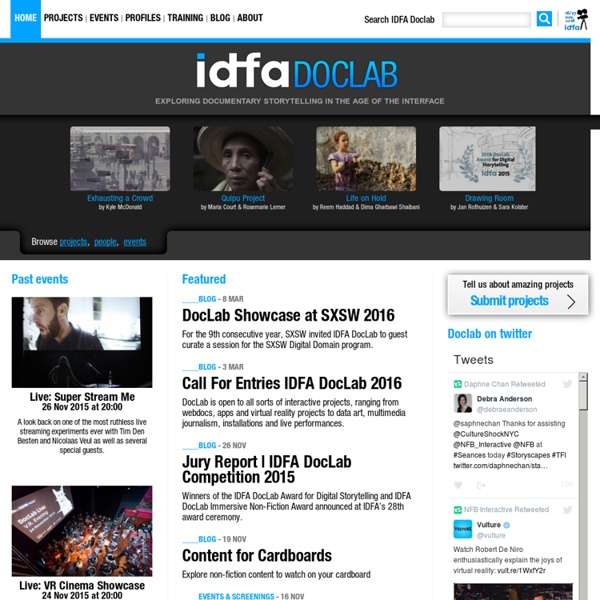 Watch Radiolab on stage in Seattle Radiolab once again raises the bar for live documentary storytelling events. And the winner is: I Love Your Work Read the full jury rapport for the firestarters IDFA Doclab Award for Digital Storytelling 2013. Interactive Reality Lab Report The Interactive Reality Lab is a new meeting place or “un-conference” for international experts and a talent program for twenty digital documentary storytellers from the Netherlands and Belgium.

Online screening: Journey To The End Of Coal A project powered by Klynt Editing & publishing app. Journey To The End Of Coal tells you the story of a sacrifice. A sacrifice millions of Chinese coal miners are making everyday, risking their lives and spoiling their land to satisfy their own country’s appetite for economic growth. Your journey begins in Datong which is located just a couple hours away West from Beijing. You travel from there all around the region and visit its major coal mines, from the “best” state-owned complex to the worst private coal plants. In and around the coal mines, you get the story first hand from the mingong, the rural migrants traveling their country looking for work.

On the loss of control over the narrative. New roles on the interactive documentary (I) The intrinsic nature of the conventional documentary has experienced major changes since the advent of this new type of documentary, as a result of today’s new technological landscape. Based on Nichols’ argument (1991) regarding a possible definition, we specifically analyses three trends in depth: - The author can no longer set out to create a unique, closed and subjective narrative program, and must assume to some extent that he will lose control of his work, and as such the new situation often works against his interests. In short, he no longer depends on himself to convey a particular narrative program. - The construction of the discursive narrative and order involve a linear and sequential pattern in a new scenario characterized by the multi-deployment of approaches, nodes and outcomes.

Collapsus: Walkthrough with Tommy Pallotta Director Tommy Pallotta introduces Collapsus, Submarine Channel’s 2010 transmedia project that combines interactivity, animation, fiction, and documentary. Collapsus looks into the near future and shows you how the imminent energy crisis affects a group of ten young people, who appear to be caught up in an energy conspiracy. Collapsus is part of the VPRO documentary series, The Green Transition (watch in Dutch).

What is pervasive media? Girl playing Escape From The Tower. Copyright: Calvium and Benjie Croce The simple explanation: Pervasive Media is basically any experience that uses sensors and/or mobile/wireless networks to bring you content (film, music, images, a game…) that’s sensitive to your situation – which could be where you are, how you feel, or who you are with. The 6 Most Innovative Interactive Web Documentaries Digital platforms are expanding the field of the traditional documentary, not only in terms of the distribution of linear stories, but especially in the production of content created specifically for the web. As seen in interactive web-based films like Highrise: Out My Window and Collapsus, different degrees of interactivity are now possible and are changing the way documentary storytelling relates to reality. As interactive media professor at the London College of Media Sandra Gaudenzi suggests, the differentiating levels of interactivity are a good way to classify these new forms of documentaries. According to Gaudenzi, there are three different levels of interactivity that determine the type of documentary.

Social media influences documentary-makers With built-in video cameras now the norm for mobile phones, anyone can be a film-maker – a fact proven by the role social content played in TV news coverage of the recent uprisings in the Middle East. As the dust settles, however, social media is influencing documentary-makers, too. "Social media is an enabler – allowing people to communicate in states where repressive regimes have restricted them from doing so," says David Alamouti, a film-maker and development director of inSight Education, a not-for-profit organisation championing diversity in production. "Now, however, it is also re-writing the conventions of documentary – fuelling the development of a new style as surely as the advent of TV re-shaped the documentary film-making that existed before." At one level the power of social media is about access – enabling ordinary individuals to tell and disseminate their own stories as well as traditional documentary-makers. Social media also enables a different approach to story-telling.

“Little Details” an Interactive Graphic Novel by Dublin based developers Hola Mariquita ‘Little Details’ is an interactive graphic novel developed for tablet devices by Hola Mariquita. Combining Artwork, Animation, Sound Design, Music and Interactive elements “Little Details” tells the story of Bella who upon discovering an old photograph finds herself on an adventure through the story behind the mysterious photo as she searches for its owner. Hola Mariquita are Greg O’Brien, Fabrizio Valerio Covone and Aurora Pérez Machío. The three graduated in an MSc in Creative Digital Media in the Dublin Institute of Technology. The team got together during the Masters to create an Interactive Graphic Novel developed for iPad. Top 5 of our Favorite Things: iPad Documentaries With the release of the first iPad just three years ago a new medium for visual storytelling was born. It wouldn’t take long before publishers, photojournalists, and filmmakers flocked to create immersive experiences specifically for this platform. With a big screen and the promise of better interactivity than ever before, the iPad has the potential to redefine non-fiction storytelling in the 21st century. Documentaries seem especially well-suited for this platform. Supporting the promise of documentaries to raise awareness and visually represent factual data, the physical characteristics of the iPad lend themselves to a closer and more intimate experience with media, which in turn prompts a more engaged audience.

filmingrevolution Web Resources Counterpunch Deep Dish TV Soundhunters WATCH The Gragra Xpress show is an evening drivetime show on Naija FM (official Pidgin English radio station). The show is presented by the stand-up comedian Osam and TBO also called “The mouth of the Niger Delta”. "What strikes me most in Lagos was the city soundscape being polluted by the unnecessary noise of petrol based power generators." Mikael Seifu Ajegunle, also known as "AJ City" or "Jolly City", is a shanty town that gathers two millions of inhabitants of different tribes and religions. Operation Ajax “One of the coolest media experiences I’ve seen on the iPad.” New York Times “You can just see the story. You can dig down deeper and see the actual CIA documents. You can identify with people in it.