Archived Cherokee letters translated for Yale University. A letter written in Cherokee from the Kilpatrick Collection of Cherokee Manuscripts at the Beinecke Rare Book and Manuscript Library at Yale. 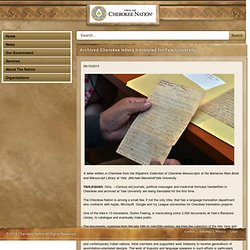 (Michael Marsland/Yale University TAHLEQUAH, Okla. —Century-old journals, political messages and medicinal formulas handwritten in Cherokee and archived at Yale University are being translated for the first time. The Cherokee Nation is among a small few, if not the only tribe, that has a language translation department who contracts with Apple, Microsoft, Google and Ivy League universities for Cherokee translation projects. One of the tribe’s 13 translators, Durbin Feeling, is transcribing some 2,000 documents at Yale’s Beinecke Library, to catalogue and eventually make public. Year 1894 Calendar – Australia. 06 Mar 1924 - BUILDING THE A.W.U. The Battle of Ninety-four Co... MBBmBm'mK : -? 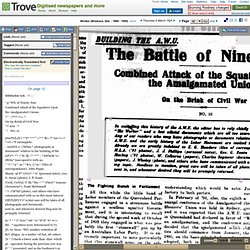 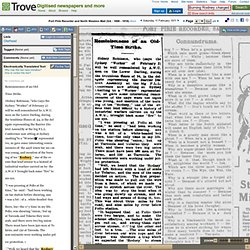 •Sidney Robinson, "who (says the Sydney "Worker" of February 2) will be well remembered by A.W.U. men on the Lower Darling, during the troublous ffimes of. 94, is the del egate representing the Barrier Dis trict AssemDly at the big P.L.L. Conference now sitting at Sydney onatting"to a "Worner■' representat ive, nc gave some interesting remin iscences of: the aayS wnen tne un>on was young, and mention of the burn ing of tee "Rodney," one of the ev ents that lend'cetoiur to a histoid of industrial warfare carried on by- the A.W.ir.V brought back some "fire" to. 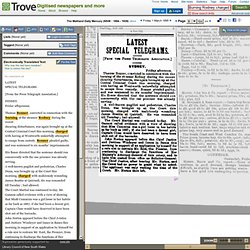 SYDNEY. Fridav affcprnnnn. Thomas Bonner, convicted in connection with the burning of the steamer Rodney during the recent shearing disturbances, was again brought up at the Central Criminal Court this morning, charged with having at Wentworth unlawfully attempted to escape from custody. Bonner pleaded guilty, and was sentenced to six months' imprisonment. His llonor directed that the sentence should run concurrently with the one prisoner was already serving. 02 Mar 1895 - The Shearing Riots. Burning Steamer Rodney. TRIA... The Shearing ltiots. 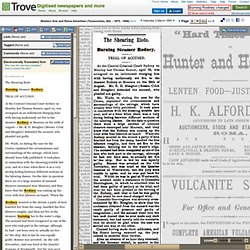 Burning Steamer Rodney. At the Central Criminal Court Sydney on Monday last Thomas Bonnor, aged 23, was arraigned on an indictment charging him: with having maliciously set fire to the steamer Rodney at Moorara on the 26th of August.- • Mr. 25 Feb 1895 - THE BURNING OF THE RODNEY. Trial of Bonner Opene... 26 Feb 1895 - LAND APPEAL COURT.—MONDAY. (Before Messrs. OLIVE... 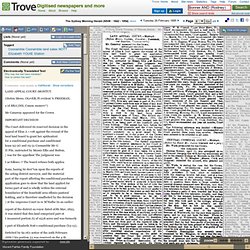 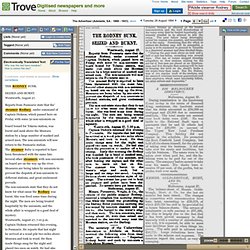 Wentworth, August 27. Reports from Pooncarie state that the' steamer Rodney, under command of Captain Dickson, which passed here on Friday with some 50 non-unionists on board bound for Tolarno station, was burnt and sunk above the Moorara station by a large number of masked and armed men. 28 Aug 1894 - POSITION OF THE SHEDS. POLICE PROTECTION WANTED.... 30 Aug 1894 - Arrival of the Sydney Police. 08 Sep 1894 - The Shearing Trouble. ANOTHER WOOLSHED BURNT. A ... Tie Shearing Trouble» . 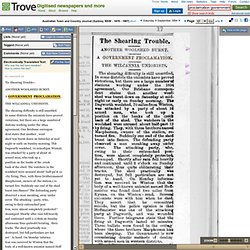 The shearing difficulty is still unsettled.' In some districts the unionists have-proved victorious, hut there are a large numbérof stations working under the 1894 agreement. Our Brisbane correspon dent states that another , wool shed was burnt down on Saturday at mid night or early on Sunday morning. 03 Oct 1894 - The Pooncarie Cases. The Burning of the Rodney. ... The Pooncarie Cases. 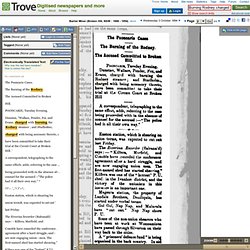 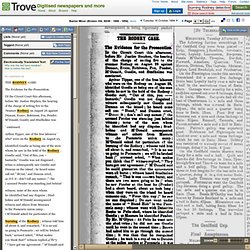 IN the Circuit Court this afternoon, before Mr. Justice Stephen, the hearing cf the charge of setting fire to the ? Teamer Rodney on August 26 against Duncan, Evan«, Robinson, Fox, Pender, M'Donald, Goodit, and Studholme was. 17 Oct 1894 - THE BURNING OF THE RODNEY. The Circuit Court Cas... THE BURNING OF THE BOONE*, j The Circuit Court Case. 17 Oct 1894 - PASTORALISTS AND SHEARERS. THE BURNING OF THE RO... The sittings of the Circuit Court were con tinued this morning, before Mr Justice Stephen. In the cases of the six unionists who were yesterday found guilty of riot at Tolarno Station sentence was deferred until tomorrow morning. Today has been occupied in the hearing of the charge against eight unionists accused of maliciously setting fire to the Steamer Rodney, at Morara, on the River Darling, on August 26.

The accused are - Sydney Charles Robins, James Fox, James Pender, William Duncan, William Goodie, James Evans, Robert Studholm, and Travers McDonald. The evidence showed that the steamer, the property of Messrs. Permewan, Wright, and Co., was conveying 45 free labourers to Tolarno Station, and was moored to a gum tree on an island near Morara early on the morning of August 26, when a party of unionists came on board, turned the free labourers off the vessel, put the captain and others on the barge, which they set adrift and set fire to the steamer. Turbance ia leari-tl at Mr. 17 Oct 1894 - Barrier Miner - p1. 18 Oct 1894 - THE BURNING OF THE RODNEY. The Case for the Defe... The Case for the Defence. In the Circuit Court thia afternoon the hearing of the charge of burning the steamer Rodney laid against Robinson, Fox, Goodie, Evans, Pender, Duncan, M'Donald, and Studholme was continued. The following further evidence for the defence was given : Charlea 'Allen, rouseabouts' cook at Polio, saw the accused Evans atr Polio on the Saturday evening; he was going to bed ; witness saw him in bed at 5.30 o'clock ; he saw Robinson on the same evening.

18 Oct 1894 - THE BURNING OF THE RODNEY. The Case for the Defe... The Case for the Defence. In the Circuit Court thia afternoon the hearing of the charge of burning the steamer Rodney laid against Robinson, Fox, Goodie, Evans, Pender, Duncan, M'Donald, and Studholme was continued. The following further evidence for the defence was given : Charlea 'Allen, rouseabouts' cook at Polio, saw the accused Evans atr Polio on the Saturday evening; he was going to bed ; witness saw him in bed at 5.30 o'clock ; he saw Robinson on the same evening. 19 Oct 1894 - Barrier Miner - p2. 22 Oct 1894 - THE BURNING OF THE RODNEY. Some Extraordinary Ch... Some Extraordinary Charges. THE following remarkable leading article is published ia Saturday's Register : The burning of the Rodney was in itself Bufncently suggestive of the terrible state of lawlessness into which some of the pastoral districts can be plunged by a dispute affecting the demands of the unionist shearers.

The bill stated that Joel Josephs, formerly of Sydney, was in his lifetime, and at his decease, possessed of a certain allotment of land in Pitt-street, Sydney, and two houses thereon erected, as tenant of the Crown under a yearly rent. That defendant being so possessed and interested, and before any application for a grant, married Mr.

That S. The-queensland-shearers-strike-in-the-1890s. History. Tolarno Station is situated 160 kilometres south-east of Broken Hill, on the eastern side of the Darling River downstream from Menindee. The current station is 250,000 acres and is 25 kilometres north-south and 80 Kilometres east-west. New South Wales Police Gazette 1893. Police Gazettes are a unique, useful and extremely fascinating resource for local, family and social historians and researchers in other fields throughout Australia. Compiled to be distributed amongst the Police Force only, these Gazettes therefore contain details and information that can not be found anywhere else. State Library of New South Wales.

5th Australian Light Horse Regiment, AIF, 11th Reinforcements Mashrobra Group, embarked from Sydney, New South Wales on board HMAT A47 Mashrobra 4 October 1915. The HMAT A47 Mashobra weighed 8,174 tons with an average cruise speed of 12.5 knots or 23.15 kmph. It was owned by the British India SN Co Ltd, London, and leased by the Commonwealth until 21 December 1916. Viewcontent. Strikes - Overnights - (ABC) Squattocracy and Struggle - Hindsight. Men of Bourke, the world is moving, and you're moving with it, too,And you live a little faster than your fathers used to do;But although the bush was lonely, and the life was rather slow,Don't forget the vanished seasons on the Darling long ago. ... Henry Lawson Sean O'Brien: My family, like many Australian families, has a small collection of precious keepsakes that link us with our forebears—sepia photographs, note-books, rosary beads, faded news-paper clippings. Limelight - Moments in Time. Squattocracy and Struggle - Version details.

ABC Rural Online. A Life on the Left: A Biography of Clyde Cameron - Bill Guy. Mutiny, Terrorism, Riots and Murder: A History of Sedition in Australia and ... - Kevin Baker. Disturbing the peace: riots and the working class. Banjo's Back - Landline - ABC. H.R. Nicholls Society: From Industrial Relations to Personal Relations: The Coercion of Society: Trade Unionism and the New Protection.

Pirate ship: a skeletal hulk in the Darling river is a tangible link to what was probably the only act of inland piracy in Australian history, as well as being an important part of the birth of our labour movement - Version details. Search results for 'PS Rodney' - Pictures, photos, objects. Trove.nla.gov. Proclamation by the government : by His Excellency the Right Honourable Sir Robert William Duff ... and Commander in Chief of the Colony of New South Wales and its dependencies ... / by his excellency's command James N. Brunker. - Version details.

Shearers, strikes and steam boats: the burning of the P.S. Rodney - Version details.